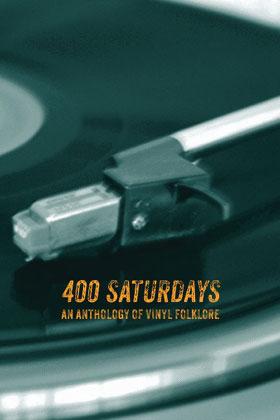 It’s actually a great idea for a book. 400 Saturdays: An Anthology of Vinyl Folklore is described on its (exceedingly well-designed) cover thusly: “In the spirit of Studs Terkel‘s Working…an intimate look into the active listening experience.” And across some nearly two hundred pages, K. Johnson-Bair shares verbatim transcripts of the vinyl reminiscences of about sixty Americans. Each – often presented with a short list of standard questions from the author – tells his or her story about the first record purchased with their own money, the record(s) that most influenced them (and why), and other compelling questions. The transcripts run from a half page to several pages, and – as is the case when one takes the oral history route with what are clearly not a bunch of writers – the results vary.

Some of the people are quite articulate, charming and fascinating. Others clearly get their facts wrong, remembering, say, a specific record purchase made improbably years before said record was released. But that’s okay in and of itself; people’s memories falter, and there’s often a larger truth even when the facts aren’t straight. The people interviewed range from quite old individuals who remember 78rpm discs, to people of my generation who grew up with the piece-of-furniture hi-fi console in their living room (this group represents the preponderance of the interview subjects), to younger people whose experiences with vinyl are more limited.

Johnson-Bair doesn’t really focus in tightly on vinyl culture, though: while there are some fascinating ruminations of days spent in record stores and whatnot (as a reader, these sections resonated most with me), some of her questions head off into other territory. That’s not an indictment of the book, but it does point out the fact that “vinyl folklore” is perhaps not the most apt phrase with which to describe 400 Saturdays.

Where 400 Saturdays does falter is twofold. One, Johnson-Bair provides little to no context about the interview subjects. With the exception of one or two pieces, she doesn’t point out to the reader that some of her interview subjects (Tony Sales and Jim Dickson, to name two) are well-known rock’n’roll musicians. True, they occasionally mention this fact, but the less informed-about-such-things type reader is left in the dark as to whether their own music is relevant/related to the kind of records being discussed in the interview or not. (The truth is: sometimes yes, sometimes no.) Occasional asides by the interviewees might have been more edifying to the casual reader had Johnson-Bair included a brief intro or postscript, briefly explaining some of the topics, events and names. But other than asking the canned questions (there are only the rarest of followup questions here) and providing a page-and-half introduction, the author is all but invisible within the pages of 400 Saturdays.

And – I’m putting on my editor hat for a moment here – while the transcripts presented in 400 Saturdays are very well transcribed, that sometimes means that when the speaker is inarticulate, the printed version is also borderline gibberish. This only happens a few times, but a bit of judiciously-applied editing [using brackets – ed.] could have made for a much more comfortable read. (The author makes an apologia on this topic at the book’s beginning, but…still.)

Less forgivable are the countless (I use that word advisedly; I really did start counting, only to lose count) misspellings of proper names. The mistakes that could have been avoided by an evening spent with Google include Louie Armstrong, Louie Jordan, Band of Gypsies (okay, we’ll give a qualified mulligan on that one), Billy Eckstein, Jimmy Rodgers, Big Bill Broonzey and Web Pierce (sic, sic, sic, sic, sic, sic and sic). And those examples are all within the first twenty-eight pages; I could have cited many more.

Still, 400 Saturdays is a rich collection of oral histories, and (despite its flaws) a highly readable and impeccably designed book. With the caveats noted above, I give it my qualified recommendation to readers interested in the general topic.