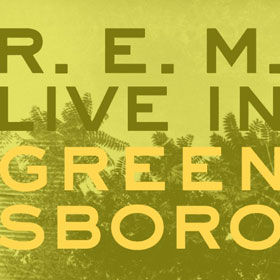 If you’re at all like me, and fondly remember the days when albums came jam-packed with an assortment of goodies, you may appreciate the new 25th Anniversary deluxe reissue of R.E.M.‘s Green. I bought the vinyl album on release back in the the 80s, and while it’s not my favorite of their records (that honor goes either to 1983’s Murmur, Fables of the Reconstruction from 1985, or 1991’s Out of Time), it has nonetheless worn well this last quarter century.

The 25th Anniversary package of their first album on Warner Brothers maintains that vaguely inscrutable aesthetic the Athens quartet always maintained; the organic olive-and-orange color scheme is maintained throughout, and (as I mentioned) there are some serious goodies. In addition to a straight reissue of the CD (housed in its LP sleeve facsimile), the package includes four fan-club type back and white souvenir photos, one of each of the buys. So you can adorn you dorm room wall with those if you like. And – surprise! – a full-size poster is included, but as you might imagine, it had to endure some serious folding to fit in the 5”x5” box. 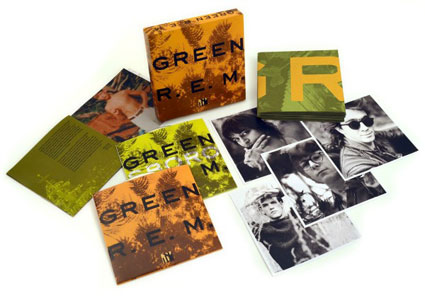 Souvenirs aside, what really makes this expanded reissue worthwhile are the historical liner note essay by Uncut editor Allan Jones, and the bonus CD. The latter documents a November 10, 1989 concert before a friendly crowd at Greensboro NC’s Greensboro Coliseum. (It’s a nice bit of, er, planned serendipity that the first five letters of the venue line up with the album’s title, and the packaging makes use of this.) The band tears through twenty-one songs in this show, concentrating on then-new material. As was standard R.E.M. practice in those days – I saw them several times, having grown up in Atlanta – the band rarely interacted with their audience in any meaningful way, instead preferring to let the music carry their messages. Before a couple of the songs, Michael Stipe declaims a bit of free verse, but there are definitely no how-ya-doing-Greensboro moments on the Live in Greensboro 1989 CD. Two songs from the set (“Low” and “Belong” hadn’t even been recorded at this point; they would surface – in arrangements quite similar to the live ones showcased here – on Out of Time.

Throughout, the band plays the arrangements pretty close to the studio versions, though Stipe takes some license with phrasing and melody on several numbers, most notably “”It’s the End of the World as We Know It (And I Feel Fine)” and “Pop Song 89.” The harmony vocal work of bassist Mike Mills and the chiming, deceptively simple guitar work of guitarist Peter Buck are highlights of this well-recorded live set. The arena-rock nature of the date makes things feel a bit sterile – this is no 1980 Athens club date, after all – but as an artifact of R.E.M. At their (commercial) peak, it’s a welcome addition to their catalog.

Note: Sadly for those who purchase the physical artifact, five excellent songs have been left off of the Greensboro CD, including “So. Central Rain (I’m Sorry)”.