Home  »  fusion • instrumental • interview • jazz • new release   »   You Can Be Who You Are: The John McLaughlin Interview, Part 1

You Can Be Who You Are: The John McLaughlin Interview, Part 1

Far be it from me to attempt to introduce John McLaughlin. One of the world’s greatest guitarists, his career has spanned five decades. His latest album Now Here This is credited to John McLaughlin and the 4th Dimension, and it’s the third studio album from this particular improvisational jazz outfit. The band’s 2013 tour will take them to Asheville NC’s Orange Peel on Thursday June 13, and that is where I had planned to see McLaughlin onstage (for the first time in my life). But my plans have changed, and next week I’m instead headed to the Bonnaroo Festival in Manchester TN. Fortunately, so are John McLaughlin and his band, so I’ll see them there.

Several days ago, John was kind enough to spend an extended period of time with me, discussing various phases of his career, the new album and tour, and – perhaps most fascinating of all – his philosophy of playing, composing, and music in general. I’m pleased to present that conversation in its entirety as a four-part feature – bk 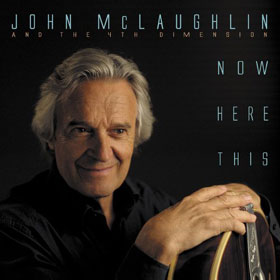 Bill Kopp: Throughout your career you have – or at least it has seemed like you have – switched your focus back and forth between electric and acoustic guitar playing. Can you tell me a little bit about the ways in which your approach differs for each of those instruments?

John McLaughlin: Well, I think in addition to the acoustic and electric guitars, we shouldn’t forget the synth guitar. I already began experimenting with the synth guitar in the 1970s. I used it in the second Mahavishnu Orchestra. It was a real monster, but the technology today is far superior. I don’t know if you’re aware, but there is one piece on the last album [To the One, 2010] and two synth guitar pieces on the one before that [2008’s Floating Point].

Let me put it this way. I began my “guitar life” as an acoustic guitar player. Because when I was ten or eleven years old, I actually didn’t know what an electric guitar was. It was a while ago [laughs] and I was living in a little town just south of Scotland; [there was] not too much going on.

In any event, I fell in love with the acoustic guitar, and subsequently with the electric guitar. But I never stopped having this profound affection for acoustic guitar. And in a way, that’s how my career has oscillated between the two.

Now, the approaches are quite different. Because the instruments are so radically different. I think if you spoke to a keyboard player, a piano player, particularly…take someone like Herbie Hancock, who is just a wonderful pianist. He has an approach to the piano that’s his approach, and it’s very pianistic at the same time. But you hear him on the synthesizer, and he has a completely different approach. Because the instrument, in a way, demands it.

And it’s the same between acoustic guitar and electric guitar. I cannot play acoustic guitar in the way I play electric. And the music I play is really a different form. The acoustic and electric – and synth guitar, for that matter – demand a particular kind of form in which they can expose themselves in the best way.

When music comes into my head and it’s acoustic, I know it’s going this way, and if it’s electric, it’s that way. Carlos Santana and I just just mixed music for a DVD that both of us did about eighteen months ago in Switzerland. You’ve got two percussion players, two drummers…I mean, how can you play acoustic guitar?! It’s impossible. But Carlos and I, because we had played acoustic guitar together before – it was a kind of reunion, a 40-year reunion – we sat down and played two acoustic guitars, but with nobody else. 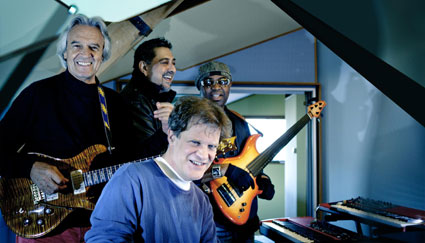 But this doesn’t really work with electric guitars, does it? You put the drums and bass and keyboard and electric guitar together, and everyone’s happy. It’s really two distinct forms. But of course related.

BK: I know that genre labels aren’t always useful, and that they can be limiting. But how would you classify the type of music you’re doing on Now Here This?

Whatever we do, the thing is: if you’re gonna play rhythm and blues, you’ve got to really do it. You can’t just [moans] “Oh, let me just get through it.” I love r&b, because it’s part of jazz. I think that if you take the r&b out of jazz, you don’t have much jazz left!

BK: It’s all head and no heart if you do that… 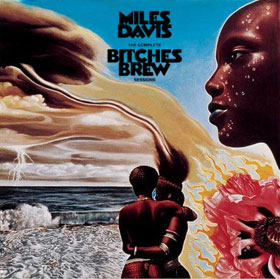 JM: Yeah! So from 1969, I’m involved with Miles Davis. Miles made his big move; I just happened to be there at the right time. He wanted guitar; he wanted to move out of this kind of quintet thing that he’d been doing the whole of the sixties. And it really began with that first record I did with him, In a Silent Way; he started to move out. And of course by the time we got to Bitches Brew about six to nine months later [1970], he was really…he was a fusion musician before all of us.

BK: Absolutely. I love the A Tribute to Jack Johnson [1971] material. People don’t know as much about that one.

JM: It’s an r&b thing. That whole first number [the nearly 27-minute “Right Off”] came out of a jam that I actually started in the studio. We were waiting for Miles to come and give us some music, and that thing just came out of a jam. And it was marvelous. In fact, Miles subsequently told me that [Jack Johnson] was his all-time favorite record. Isn’t that something? Unbelievable! Out of all the records he made. Because I’ve got to tell you: we were sitting around…there was Billy Cobham [drums], Herbie Hancock [organ], Michael Henderson [bass guitar, and Steve Grossman on tenor sax]. We were sitting there for twenty minutes, and I got bored. So I started doing an r&b thing; that’s what I go back to. And it was a sort of variation of an idea that eventually became “The Dance of Maya” [from Mahavishnu Orchestra’s 1971 album The Inner Mounting Flame]. If you listen to the Jack Johnson album, you’ll hear similar chords. I did those r&b shuffles, and Billy locked in right away. Michael Henderson, too.

And then Miles ran into the studio with his trumpet, and he just played. And I think he was just waiting for something like that to happen. I had never heard him play like that, either onstage or in the studio. And he just soared; it was fantastic.