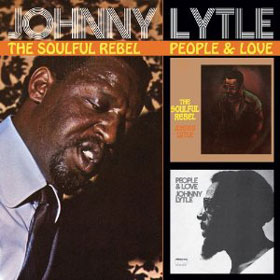 Growing up, I heard a lot of music in my home. My parents were in those days big music fans, even though neither could carry a tune. They knew what they liked: show tunes, light classics, a bit of Sinatra. But they knew what they didn’t like, too: British accents (that copy of Meet the Beatles notwithstanding, thank goodness), violins, and…jazz. As such, I missed out on a whole wide swath of musical styles in those formative years.

One instrument I don’t think I ever heard was the vibraphone; no Lionel Hampton records in Mom and Dad’s LP collection. So put all that together and you might understand why I never heard of – much less actually heard – a pair of albums from acclaimed vibraphonist Johnny Lytle, The Soulful Rebel (1971) and People & Love (1972). I’ve said it before: thank goodness for the fine folks at Real Gone Music for turning me (and others) on to some too-good-to-miss music from years ago.

Employing a funky, soulful jazz style that puts equal emphasis on melody, hooks and groove, Lytle and his session players tear through a groovy assortment of originals and familiar classic/standard tunes on these two albums, now combined onto a single CD for this 2013 release. On “The New Village Caller,” Lytle gives his vibes a vaguely Caribbean flavor, playing at breakneck speed while the band chugs along, right in the pocket. Ron Carter‘s bass is especially effective, and David Spinnozza‘s clean, lightning guitar runs spar with Lytle’s vibe work. Ray Barrett‘s congas add to the solid percussion work from Jozell Carter. A four-track piece called “The Soulful Rebel Suite” is the centerpiece of the ’71 album, and in addition to giving all the players ample time to shine (especially Billy Nunn on organ), the tracks evokes a sort of Santana-with-vibes proto-world music feel, all while remaining accessible. A cover of Chicago‘s “Does Anybody Really Know What Time It Is?” is the only instance in which Lytle and band veer perilously close to easy listening. With loads of sparkling vibraphone work, it’s a treat for anyone who likes mainstream 70s instrumental music. The Soulful Rebel happily strays far outside a jazz bag.

On People & Love, Lytle again uses Carter on drums, but the other “name” players are absent. Yet the musicians on this album turn in tasteful performances, too. Where on The Soulful Rebel Lytle wrapped up the disc with a pop cover, on People & Love he opens with one: “Where is the Love.” Again heading for easy listening territory, it’s the weakest (and, perversely, most commercial) thing on the record. Lytle’s vibe solo lifts it up, though, so it’s not a total loss by any means. Betty Glamann‘s harp (a real harp, not a blues harp) adds to the MOR flavor of the ’72 album. Even though it has a great hook in its chorus, “People Make the World Go Round” overstays its welcome a bit, due in part to a surprisingly dull drum solo. But the funk does make a return on “Tawhid,” easily the highlight of the 1972 release. Overall, People & Love is a more subdued affair than its predecessor.

Together, The Soulful Rebel and People & Love show a balanced portrait of Lytle’s talents; he’s equally adept at the more commercial stuff as with the funkier styles, and the two records – both tastefully produced by jazz studio legend Orrin Keepnews – balance each other nicely. Originally issued on the Milestone label, these two records have never been reissued until now. Vintage vinyl copies of The Soulful Rebel start at $50 if you can even find them, and People & Love goes for twice that. Get and enjoy the RGM release.