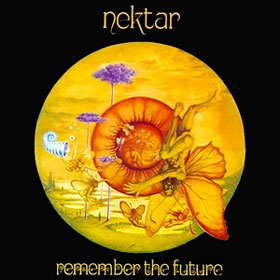 Album reissues can be funny things. Not haha-funny, but perplexing-funny. Take, for example, the case of Nektar’s breakthrough 1973 LP Remember the Future. Their most commercially successful album, it ranks among their best and was released amidst a string of creative high-water-mark albums. It reached #19 on the Billboard album charts, and is a good exemplar of what we might call second-string progressive/hard rock of the era. I say second-string not because of any aesthetic shortcomings, but rather due to the fact that Remember the Future was released into a marketplace that included The Dark Side of the Moon, Houses of the Holy and Yessongs, to name but three.

But the album is fondly remembered, and clearly numerous record-company types believe there remains a market for it: according to allmusic.com, Remember the Future has been reissued on CD by at least nine(!) different labels since the start of the 21st century. And here’s where the perplexing part comes in: as recently as 2011, a tiny boutique label called It’s About Music reissued the album as part of its The Nektar Deluxe Editions series. A two-CD set, it featured the original album (it was two vinyl-side parts of a self-titled piece) plus a two-track live run-through of the entire album. (The latter’s date and venue is left as a mystery.) A second disc, subtitled “Vivo Niteroi,” documents a live Nektar concert from 2007 (with, it should be mentioned, two members from the 70s lineup: leader/guitarist Roye Albrighton and drummer Ron Howden). The second disc doesn’t really have anything to do with the first, but it’s a nice enough performance, surveying songs from throughout the band’s long history.

Yet in 2013 – less than twenty-four months later – Remember the Future has again been reissued, this time by Purple Pyramid, a label that (delightfully) revisits all manner of those second-string 70s releases (Captain Beyond, for example). Also a 2CD set, the contents of this release are quite different. The digipak set (a much nicer packaging than the It’s About Music release) includes the original album on the first disc; there is nothing in the liner notes suggesting that it’s a new remaster or anything such as that. The undated live version is not included, giving the disc a pretty-darn-short runtime (under 36 minutes). The second disc includes some radio edits of pieces from the album-long suite (Nektar was never a “singles band,” but these might have helped get their music on the radio.) And then the second disc features a set of music dubbed The Boston Tapes. What’s slightly strange is that this material had also been reissued in 2011, appended then to another It’s About Music release, Nektar’s A Tab in the Ocean. Pairing the 1970 demos – which sound quite unlike the band’s official canon – with Tab made some sense, seeing as A Tab in the Ocean was Nektar’s official debut; combining the two into a set showed how the band altered its style rather quickly.

I’ve covered The Boston Tapes as part of my original A Tab in the Ocean review from 2011. Remember the Future is quite good as well, though not quite up to the quality level of 1972’s Journey to the Centre of the Eye. Still, for fans of long-form, suite-type heard rock with elements of progressive rock (and even a bit of funk), Remember the Future is worth seeking out. And despite the confusing flurry of re-reissues, I would direct interested parties to this latest Purple Pyramid reissue first. It’s probably the easiest to find, the packaging is nice, and though the bonus material is somewhat unrelated, it’s very good. So until the next reissue offers up something different yet again, this is the one to get.