The Bobby Rush Interview, Part One

An exemplar of soul-blues style, Bobby Rush has been an active recording artist for nearly thirty-five years. His 2000 release Hoochie Mama was nominated for a Grammy in the blues category. His latest album finds him moving more toward the sounds of his youth. Produced by multi-instrumentalist Paul Brown, Down in Louisiana is Rush’s 26th album. I recently spoke to him about the new record – bk 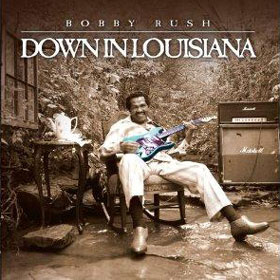 Bill Kopp: There’s a strong swamp pop/cajun/zydeco vibe to several of the songs on Down in Louisiana. This album represents a more direct combining of your funk and soul sounds with those styles. What led you to draw on that part of your roots in a way you haven’t as much before?

Bobby Rush: Of course I was born in Louisiana. I went – by way of Arkansas – to Chicago in the early 50s, and I stayed there for 47 years. And the influences of Muddy Waters, Howlin’ Wolf, BB King, Chuck Berry, on and on…those influenced me to change to do what [those] people were doin’ at the time they were doin’ it. I still had the roots of Louisiana, but I had forgotten it and didn’t do anything different. But what I did was add what I learned in Chicago to what I already knew. And that’s what I came up with.

I came up on the chitlin’ circuit, listening to Ray Charles. Still my favorite. T-Bone Walker, Jimmy Reed…and when you put all those elements together – and I like some parts of all of ’em – it’s like a melting pot. When you put ’em in a bowl and stir it up, you get Bobby Rush. And that’s where it comes from.

I always had this Cajun thing, but hearing Chicago blues, I fell in love with that phrasing and singing. Put it all together: blues, funk, Cajun, folk.

BK: Down in Louisiana is a more intimate-sounding record than your previous albums. Why the change?

BR: I agree. It’s not accidental; it’s intentional. I planned it this way for two reasons. In my category, as a black entertainer, there’s BB King, Buddy Guy, Robert Cray…those are the guys I’m in the ballpark with. Now, people want to hire me, and sometimes they can’t afford the price of putting me on with a big band. This way [with a small band], I can go in raw, go back to the roots of the chitlin’ circuit. The juke joints, where we all come from. And then they can still get Bobby Rush, but at a lower price. I think I’d be a little bit cheaper than most of them.

The juke joints are what got us all started toward where we are now. And we’ve forgotten about the bridge that brought us across. We’re makin’ all this big money, charging all these big prices, and the small places can’t afford us any more. So I wanted to go back and give to the people who made us what we are now.

BK: So the production and arrangements on the album sort of give a preview of what that would be like…

BK: The methods used for recording albums have changed a lot since you started your recording career. Did you make use of modern technology – things like ProTools and such – or did you try to cut the album live in the studio?

BR: All the sounds on the album are live musicians. But I did find myself, before this album, doing some things economically using some ProTools stuff. I do that because it’s modification. Ten, fifteen years ago, everybody inside the business was talking about the production of the musicians on the record, where it was going. When I started, there were 45s, 78, then 8-tracks…everything changes.

Twenty-five or thirty years ago, we couldn’t do this interview on the phone like we’re doing. Not and get the sound quality we have. It’s almost like the bathroom. In the 1800s, they had the outside toilet. But guess what? Now we’ve got the inside toilet. Bathrooms that smell good, the whole bit. But we do the same thing in ’em! That hasn’t changed.

We modify how we record things, but what we talk about remains the same. People have to get over [being upset when artists use] the synth horns and all that. I don’t use those, but we do have to keep up with the modifications. I just bought me a smart phone. It’s so smart, it shows the dumbness of me!