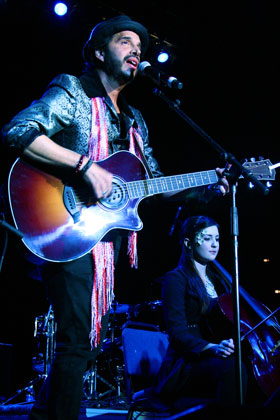 It’s always a tough gig playing as the opening act. It’s even more so when the show is like the one I recently witnessed at Asheville’s Civic Center. First there’s the venue: a sports arena more often home to gun shows and ice-skating (not at the same time!), the room simply isn’t designed for music performance; the acoustics are dreadful. And the night’s hamfisted sound engineers did the acts no favors, augmenting their performances with crackles, occasional feedback and poor balance between vocals and instruments.

And then there’s the nature of the show. Though I didn’t know it ahead of time, the night’s billing – Cuban-American singer/songwriter/guitarist Elsten Torres opening for a (Sly-less, of course) Family Stone – was the annual fundraiser event for our fine local Firemen’s Association (as I’ve chronicled elsewhere, anywhere else it’d be called a union). As a result, on this bone-chilling Winter night, the remarkably lily-white audience was relatively small, and overwhelming populated (it would seem) with people who rarely venture out at all on a Saturday evening, much less go to hear live music.

But judging from the enthusiastic reception Elsten Torres and his two bandmates (a female cellist and a female violinist) received you’d never know that the audience wasn’t instead filled with ringers. As the trio sailed through several songs from Torres’ Waiting for Clouds album, the crowd alternatively listened quietly and applauded rapturously. Despite the poor house mix (I suspect the monitor mix for the musicians onstage was fine, but on the floor the vocals sometimes obliterated the delicate stringwork), Torres’ trio delivered upbeat and graceful reading of his original material. 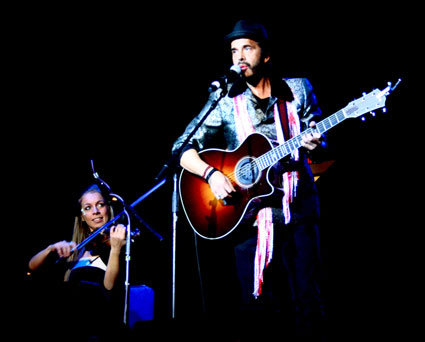 And far from being a monochromatic “chamber pop” style performance, Torres’ parts for his accompanists displayed their impressive stylistic range: Silvana Lanfredi (on violin) alternated between classical approach and a sprightly fiddle manner of playing, and cellist Stephanie Jaimes occasionally took on a role not dissimilar to an upright bassist in a jazz trio. The absence of percussion was never an issue: between Torres’ expressive acoustic guitar work and the “implied” percussionist of many song arrangements, the beat was there, always felt if not heard.

While the majority of the set (billed, somewhat confusingly, as Hey Elsten rather than Elsten Torres) focused on original material, an inventive (and initially barely-recognizable) U2 cover (“I Still Haven’t found What I’m Looking For”) scored points for its outside-the-box reinvention. While the songs as presented on Waiting for Clouds employ electric guitar, pedal steel, banjo, vibes, drums and more in addition to acoustic guitar, the stripped-down onstage presentation helped put the focus on the songs themselves. “Closer Tonight” was especially effective onstage, even though Torres sang both parts (the studio version features a duet with Gaby Moreno). In total, an appealing show that broke the opening-act rules and provided great entertainment, forcing the headliners to bring their best effort as they followed Torres onstage.