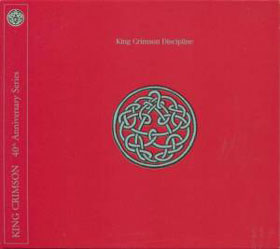 From their inception in 1969, King Crimson has always been about creating outside-the-box music that challenges (or simply ignores) convention. By the middle of the 1970s, the band had created at least two masterpieces: their debut album In the Court of the Crimson King and 1975’s Red. But after Red – when King Crimson was arguably at its commercial and critical apex – leader/founder Robert Fripp disbanded the group to pursue other projects.

Luckily for all concerned, by the beginning of the 1980s, one of those projects had evolved into a new configuration of King Crimson. Initially called Discipline, the four-piece included guitarist Fripp and drummer extraordinaire Bill Bruford from the previous lineup, and added a pair of American players. Guitarist/vocalist Adrian Belew had already established his reputation via sessions with Talking Heads, Frank Zappa, David Bowie and others; not only was he a guitarist of impressive range, depth and expression, but he brought to the band a pop sensibility it has always lacked (and, to be fair, had never actively sought). Journeyman bassist Tony Levin also sang, but in addition to his peerless skills on the four-string, he was (or would quickly become) the master on an exotic instrument called the Chapman Stick. A multi-stringed instrument that is tapped rather than strummed, the Stick allows the player a dizzyingly wide sonic palette, just the right tool for an innovative player such as Levin.

The music that this new version of King Crimson would produce, however, bore little if any sonic similarity to what had come before. While on Red, Fripp coaxed thickly distorted power chords (after a jazz fashion) out of his Les Paul, his subsequent solo ventures saw him pursuing a more ambient approach. Extensively utilizing on-the-fly tape loop technology to expand the sounds of his guitar, he dubbed his new technique (developed in collaboration with Brian Eno) Frippertronics. And it was the Frippertronics approach, based on the man’s often lightning-fast single-note runs – upon which Fripp built his playing in the 80s Crimson.

Belew had already shown that he could coax all sorts of otherworldly sounds out of his battered guitars., and he would create one of his most memorable signature sounds on this first record with his new band. But his bent pop sensibility would also allow the new lineup to build on the emotion-filled approach the previous lineup had used to great effect on Red‘s “Starless.” Bruford, too, seemed a man liberated: while in the early 70s (after having left Yes for the greater challenge of King Crimson) he had briefly shared percussion duties with the wild Jamie Muir, it was now solely left to him to create the band’s drum sounds. He fully immersed himself in polyrhythms, and Belew’s time with Talking Heads likely helped prepare him to be able to handle such complexities.

From Discipline‘s thrumming opening to “Elephant Talk,” it’s clear that the 1980s King Crimson is going to be a very different animal. While Belew declaims a bunch of words (“These are words with a ‘D’ this time…”), the four players twist and turn their way through an unbelievably complicated – yet somehow almost danceable – piece of music. Belew’s guitar roars like an elephant in the wild, and Fripp makes highly effective use of his volume pedal to create a “solo” that feels more like some exotic wind instrument, the sort that might coax a snake out of its basket.

But “solo” isn’t really the right word for the individual breaks that each of the four men take. Everything about this lineup of King Crimson is about the ensemble; even when one player seems to be featured, what the other three are doing is of equal interest and complexity.

“Frame by Frame” was the “hit single (sic) from Discipline, and the highlights are too myriad to catalog here. Bruford’s fiercely aggressive yet lyrical drumming on the track is some of the most impressive of his entire recorded career, and that’s something. The intertwining guitar lines are both impossible to near-follow and lovely beyond compare. Here Belew’s pop instincts meld perfectly with a free-jazz approach, however counter-intuitive that phenomenon might read on paper. (An aside: A dream I often had in the late 1970s involved the unnerving experience of events moving simultaneously at a glacial pace and a fast-forward one; my first hearing of “Frame by Frame” gave voice to that dream: it sounds just like what was hammering away at my subconscious.) 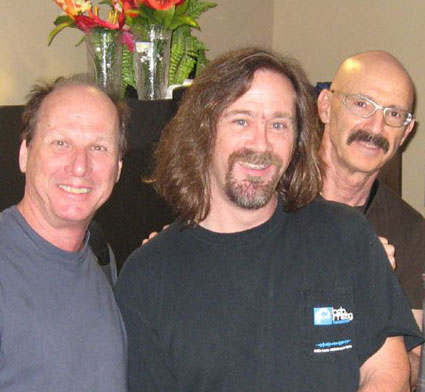 “Matte Kudasai” builds on a lovely dreamscape-pop approach; Belew’s romantic, heartfelt vocals blend nicely with Fripp’s melancholy guitar lines; the latter vaguely recall some early 1970s Pink Floyd solos from David Gilmour. But “Indscipline” takes tings in a very different direction. Atonal in places, featuring (yet again!) some of the most aggressive percussion Bruford’s ever turned in, and full of screaming guitar lines, the song is musically every bit as off-kilter as the story (supposedly written by his then-wife) that Belew recites. Perhaps the most “difficult” piece of music on Discipline, the track sums up every boundary-pushing quality the band ever had, and distills them into a perfect mix. When at the song’s end, Belew screams, “I like it!” the listener is left breathless.

“Thela Hut Ginjeet” heads back into polyrhythm territory, and features the not-remarked-upon-enough harmony vocals of Tony Levin in addition to a rather David Byrne-sounding Belew. Once again Belew recites a story – Discipline is at its core about three things: music, singing, and reciting little vignette-style stories – this time about a narrow escape from a very dangerous situation. Bruford’s clattering drums create just the right exotic “jungle” vibe.

“The Sheltering Sky” may be the most subtly beautiful piece of music any version of King Crimson has ever done. Bruford’s subtle drum work and Levin’s throbbing stick figures are topped by Belew’s under-water sounding guitar, while Fripp lets loose a song-length solo of stunning beauty and grace. Eight-plus minutes and it’s still over too soon: this is one track that could go on forever and not wear out its welcome.

Discipline wraps up with its title track, a summation of all that has come before. Interlocking polyrhythms and melodic snippets that seem to recalls many of the previous pieces on the album serve to tie up the whole affair nicely with a big bow. Sonically, the piece is almost an extension of the “discotronics” direction Fripp took with his League of Gentlemen project, not long before this version of King Crimson got off the ground.

Like all other entries in the band’s 40th Anniversary Series, the 2011 reissue of Discipline includes quite a few goodies. Expertly remixed by Porcupine Tree‘s Steven Wilson, the new package includes a new stereo mix (sourced from the original multi-track masters), and a bonus DVD. The latter contains another version of the album, remixed for 5.1 Surround, two more versions of the album in super-high resolution; the entire album in rough-mix form, and three video clips of the Discipline-era band performing on the BBC’s venerable Old Grey Whistle Test.

The CD also adds a few bonus audio tracks as well: a brief selection of Belew’s vocal loops; a welcome alternate mix of “The Sheltering Sky” that features even more out-there guitar work from Fripp (one can never get enough); and an instrumental mix of “Thela Hut Ginjeet.”

For anyone interested in the most innovative and exciting music that the (loosely-defined) rock idiom has to offer, the 2012 reissue of King Crimson’s Discipline deserves a place on the shelf right near In the Court of the Crimson King and Red. Taken together, these three wildly disparate albums (having only Fripp in common) represent the pinnacle of what has come to be known as progressive rock. Beyond essential.