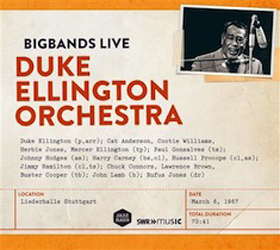 Duke Ellington is one of the most important figures in American music, let alone within the jazz idiom. Bandleader, arranger, pianist, composer, popularizer of jazz…Ellington’s influence is incalculable. His vast catalog of work is filled with essential gems. My own first conscious/intentional exposure to his work was via a used vinyl copy of Ellington at Newport, the legendary 1956 LP that documented the near-riotous (an I mean literally) festival concert. A fuller version of that concert – a fascinating sort of “stereo” mix made from two separate mixes of the live performance — came out on a multi-CD set in 1999. Both are simply essential.

By the time of Newport, Ellington’s recording career was entering its fourth decade. And he’d continue onward, leading exciting bands well into his later year. In 1967 – a time by which the big band era had long since receded into history – the Duke Ellington Orchestra gave a concert on March 6 at Germany’s Liederhalle Stuttgart. And luckily for posterity, that concert was recorded in stereo high fidelity. The archivists at the Jazzhaus label have brought this late-period Ellington show to modern-day listeners with the previously unreeleased recrding, lart of the label’s Big Bands Live series.

With a band that featured tenor saxophonist Paul Gonsalves (the man largely responsible for inciting the aforementioned Newport near-riot), Ellington himself on piano and thirteen others, this truly was a big band. With a set list that kicked off with an perfunctory (under a minute!) run-through of “Take the ‘A’ Train,” Ellington and his band seemed to want to get onto the more challenging stuff. They tore through thirteen songs, drawing mostly from Ellington originals and pieces by longtime collaborator Billy Strayhorn. With little or nothing left to prove, Ellington led the band through works such as “La Plus Belle Africaine” and “A Chromatic Love Affair.” A few standard-type songs are tossed into the mix, but overall this is a more serious outing for the band.

Staggeringly prolific, Ellington released a vast number of albums. The liner notes for Big Bands Live note that Ellington “released around 35 albums between 1960 and 1967 alone, including adaptations of classical works, the ‘Far East Suite’ and the ‘Sacred Concerts.’” With so much material, it’s nearly impossible – and largely fruitless – to recommend one over another, but this Big Bands Live release nonetheless remains a welcome addition to the Ellington canon. Presented in peerless sound quality, it’s a thrilling document of a band that defiantly refuses to accept that the time for their style of music has come and gone. They play accordingly, and modern-day listeners are rewarded with this wonderful audio treasure.