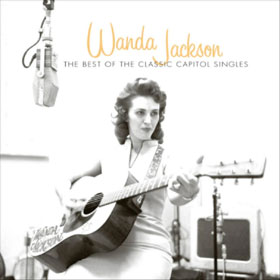 If you want a potted history – albeit one from a provocative perspective, and with its own axe to grind – of Wanda Jackson‘s career, I recommend you put your hands on Nick Tosches‘ Unsung Heroes of Rock’n’Roll: The Birth of Rock in the Wild Years Before Elvis. But for the music itself, your go-to item simply must be the new Omnivore Recordings collection, The Best of the Classic Capitol Singles. Wild beyond description, some of the songs on this 29-track set display the high points of a really out-there recording artist.

Jackson’s opening single for the label, “I Gotta Know” veers wildly between rockabilly (or just plain rock) and two-step country. It rocks (so to speak) back and forth, keeping the listener delightfully off balance. Music didn’t often get this adventurous – especially in the Nashville idiom (these tracks were recorded in either Nashville or Hollywood). While the b-sides included here (half of the material, natch) lean in a safer, c&w direction, the a-sides are all over the stylistic map, and in the best way possible.

It’s difficult to imagine just how incendiary this music must have seemed upon initial hearing back in the 50s and 60s. There simply wasn’t a precedent – among white folks, at least – for the sort of unbridled, in-your-face approach that Jackson brought to music. One could almost argue that her sassy approach in songs like “Hot Dog! That Made Him Mad” is something approaching proto-feminist. A neat trick, that: putting forth the image of a strong, assertive woman, and doing it in a way that was sexy to men of that era.

But again, there’s the whiplash of flipping those 45s over and hearing straight-ahead country of “Silver Threads and Golden Needles.” Those tunes are expertly arranged and performed, but they’re not groundbreaking. So listening to The Best of the Classic Capitol Singles straight through remains a jarring experience. Perhaps that’s as it should be: Jackson was never – not then, not now – interested in being boxed into one style, one label.

I saw Wanda Jackson perform a showcase set at last fall’s Americana Music Association Festival & Conference; though she’s now 75 years old, she put on one hell of a show. Backed by a rough-and-tumble rockabilly band, she tore through her songs old and new, and threw lascivious leers and come-hither looks at the men in the audience (including me, in the front row). It was funny stuff, what with her looking like somebody’s grandmother and all, but Jackson balanced a winking I-know-what-I’m-doing-up-here sensibility with a true love and affinity for the music. She’s one of a rare few who seems to have no use for the stylistic boxes musical artists allow themselves to be placed in. Yes, she’s often known as the Queen of Rockabilly, but she’s much more than that, and this new set of a- and b-sides from her classic era show Wanda Jackson at her very best. Essential.

Here’s Wanda Jackson performing her “Fujiyama Mama,” (a hit in Japan in 1957!) at the AMA Festival last year.