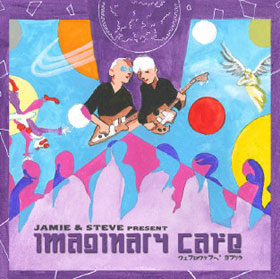 I’ve probably told the story before: growing up in Atlanta, I discovered the Spongetones‘ debut LP Beat Music in the bin of an indie record shop not long after its release. I was taken in first by the cover photos, images that clearly suggested these guys has a Beatles fixation (always a good thing in my book). The inner sleeve reinforced that, what with pics of them in a sort of 80s rethink of Beatles ’65: skinny ties, yes, but also a Let it Be-era bearded Macca lookalike wielding a Hofner violin bass. And the music was – of course – the best part: original songs that sounded like the best Beatles outtakes you’ve never heard.

Fast forward to around 2000. Having relocated to Asheville NC, I discover that the band – based in Charlotte (a bit over two hours’ drive), play locally on occasion. But locals who loved ’em – and there were many – knew the quartet not as a band that played originals, but as a cover band par excellence, a group that could convincingly recreate – onstage – works such as “I Am the Walrus.” and their prowess and interest, I learned, extended well beyond Beatlesisms; they were heavily influenced by all sorts of sixties pop, distilling it into their original material and their live cover-centric shows.

Anyway, consider me a fan for life. I’ve since met the guys a number of times, interviewed them and written a good bit about them. A few years back, as the Spongetones drew down (but did not curtail) their live onstage and recording activity, half of the group – guitarist/producer/vocalist Jamie Hoover and bassist/vocalist Steve Stoeckel – launched themselves as a duo called Jamie & Steve. Freed from whatever stylistic box the Spongetones label may have forced them into, the duo was now open to explore an even wider range of their musical vision.

In practice, this has manifested itself in occasional live dates, and on three releases. Their debut was 2009’s English Afterthoughts, followed up by a 2011 EP wryly titled The Next Big Thing, and now in 2013, another EP, Imaginary Café.

The title track weds their signature style to a heavier bass-and-drum backing than is typical of the ‘Tones, and the song leans on the dual-lead vocals of the pair. That sounds like a Theremin – or maybe just one of those vintage analog synths Stoeckel always has on his repair bench – deep in the mix. Swirling sounds in the song’s breaks mix things up nicely, as do some flown-in sounds and 70s-styled dual lead guitar a la Thin Lizzy or (shudder) Boston.

Stoeckel’s vocals and some countrified picking are the centerpiece of “Gold Mine.” There’s an intimate, friendly ambience to this and all the songs on Imaginary Café; though they were cut in the duo’s home studio(s), the songs feel as if they were laid down in front of a small, enthusiastic-yet-somehow-silent audience. “Gold Mine’s” splashy drums heighten this feel.

And percussion – specifically tympani – is a centerpiece of “Tokyo Sleeping,” a contemplative, midtempo song featuring some creamy vocal harmony work from the duo. The final minute-plus of the song conjures peak-era Beach Boys without overtly mimicking them. The title of “I’m a Dangerous Man” telegraphs a harder approach, but in truth this is another of Jamie & Steve’s Jekyll-and-Hyde numbers, in which the song’s perspective and arrangement ping-pong between two vastly different (but ultimately complementary) styles.

When I saw the title “Your Name Here,” I briefly wondered if it was a template for a wonderfully endearing ongoing project of Stoeckel’s: on friends’ birthdays, he sometimes crafts custom songs (I was honored with just such a gift last month). But no, this is an original love song in the Spongetones’ illustrious tradition. The always-over-too-soon EP wraps with a delightful slice of soaring, tuneful powerpop called “We Two.” It’s perhaps the catchiest number on the whole EP, and will leave the listener anxious for more from the endlessly creative team that is Jamie & Steve.