Album Review: The Cleaners From Venus – Living With Victoria Grey 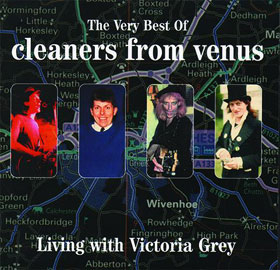 I sometimes wonder if Martin Newell gets tired of all the Ray Davies comparisons. I mean, the man (Newell) has released something like thirty or forty albums (many of these on cassette, back in the 1980s) as Cleaners From Venus, Brotherhood of Lizards, and under his own name. While many of these were zero-budget, decidedly homespun affairs – whether he wears the crown proudly or not, Newell is, along with R. Stevie Moore, a true godfather of the whole DIY music movement – Newell’s innate sense of melody always shone though.

While the pop(ular) music landscape of the late 1980s was pop(ulated) by the likes of Dire Straits and their appealing-enough-but-not-exactly-groundbreaking peers, Newell’s band (usually just him and Giles Smith) enjoyed what looked at the time like a big break: they got a record deal, and a budget for “proper” recording. Now, the label was small – and would eventually go belly up, as labels do – and the budget was tiny, but the fruits of this relatively brief era were the best of all possible worlds. The music – sometimes new songs, sometimes re-recorded versions of tunes from the Cleaners’ cassette catalog – kept its hooky charm, and avoided that deadly whiff of sellout-commercialism that cult fans fear when their favorite act makes it “big.”

That period of the Cleaners’ history has been anthologized a number of times, owing both to the high caliber of the songs (something true of pretty much all Newell’s work) and the relative polish of the production, the latter of which makes it more accessible to mainstream-attuned ears. A pair of CDs came out on the tiny Tangerine label (no relation to Ray Charles) in the mid 90s: Golden Cleaners (1993) and Back From the Cleaners (1995); both drew from this “accessible” period of the Cleaners’ vast catalogue. And both were utterly fantastic, filled with Newell’s wry vignettes of workaday life in England (well, the twin Englands of reality and his vivid imagination/memory).

A few years later, Cherry Red compiled Cleaners and Newell solo material (close your eyes and the sonic differences are negligible between the two) on a ’99 set called The Wayward Genius of Martin Newell. Now, you might think, why so many collections of material by a guy few have even heard of? The answer is simple and twofold: one, it’s that damn good. And two, the stuff isn’t easy to get ahold of, having been issued on all manner of small and/or short-lived labels, mostly on the Continent.

So once again, in 2004, Cherry Red took a crack at compiling the highlights from the “big time” [sic] era of The Cleaners from Venus, with Living With Victoria Grey: The Very Best of the Cleaners From Venus. Sure, there was a good bit of overlap with those Tangerine discs, but good luck finding those anyway.

Or the Cherry Red one, for that mater. But here’s the great news for 2013. Living With Victoria Grey (titled after one of the very best Cleaners tunes) is out again, reissued by boutique label Optic Nerve. But wait: it’s on vinyl! And not just any vinyl…it’s on that heavy stuff, lovingly pressed in splatter-colored grey (grey…get it)? A wonderful gatefold sleeve and a lavish full-size booklet full of photos and wry essays by both Newell and Giles Smith make it even better. You can enjoy the booklet, but my suggestion is to leave it alone while the music plays; the rich, timeless pop that is Cleaners From Venus music deserves your undivided attention. Once the records are done – eighteen tracks on the pair of LPs – you’ll have time to enjoy the entertaining written words of these two wordsmiths. (Aside: I’d strongly recommend you track down Smith’s book Lost in Music; it deals in great and amusing detail with his Cleaners-era experiences, and is laugh-out-loud funny to boot.) 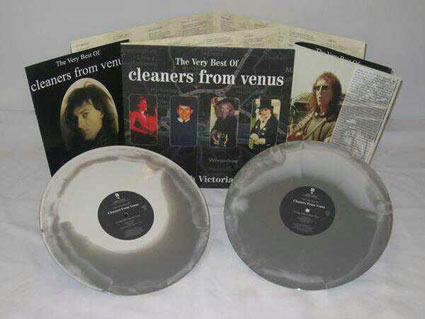 No, Newell doesn’t sound at all like Ray Davies. But his body of work does indeed deserve mention in the same breath – in the same rarefied air – as the Kinks‘ leader. Track down this new, limited-edition set Living Victoria Grey, and in so you’ll be doing your small part to help rescue Newell and his music from that bittersweet situation known as “undiscovered genius.”

The limited-edition vinyl (500 copies!) of Living With Victoria Grey: The Very Best of The Cleaners From Venus is available from Optic Nerve Recordings.