Album Review: Various Artists – Who Are You 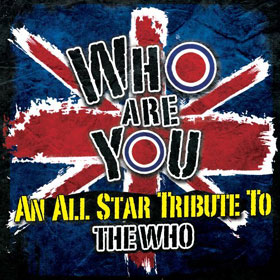 I’m cool with the concept of tribute albums. Hell, I play in a cover band, so I get it. Paying respect to a group or artist is a worthy goal, if perhaps not the world’s most creative endeavor. But for it to be more than an exercise in futility, there needs to be something of value there for the listener.

On paper, Who Are You: An All Star Tribute to The Who would seem to have that: the list of artists here includes some highly-respected and/or outside-the-box personalities. John Wetton, Todd Rundgren, Terry Reid, John Wesley (of Porcupine Tree‘s touring lineup), Rick Wakeman and several others. What makes Who Are You a bit strange is that it doesn’t leave these artists simply to come up with imaginative covers; no, instead it pairs them, seemingly at random. So we have on one cut Joe Lynn Turner (Rainbow) with Mountain‘s Leslie West, and on another – get this – Peter Noone (Herman’s Hermits) with Peter Banks (Genesis) and Ginger Baker (Cream). Is that, you may well ask, as bizarre as it reads on paper? Actually, no: their version of “Magic Bus” is pretty cool, if failing to add anything to our understanding of the original.

And there’s the rub: few if any of these songs go anywhere new. Some are slavish, near note-for-note recreations of the Who versions, yet they generally lack the slashing power of the originals. But then few can compare to The Who. A couple of the tunes are true standouts: “I Can See For Miles,” a collaboration between Mark Lindsay (Paul Revere & the Raiders) and Wayne Kramer(MC5) is pretty damn exciting. But Nektar‘s cover of “Baba O’Riley (with violinist Jerry Goodman) seems completely unnecessary. The punk summit reading of “My Generation” (The Vibrators‘ Knox, Dave Davies of The Kinks and Rat Scabies of The Damned) strikes just the right tone. But then Iggy Pop‘s “I Can’t Explain” is musically too reverent (blame/thank ubiquitous behind-the-scenster Billy Sherwood and Jürgen Engler for that), and vocally it feels phoned-in. Which it may well be.

In all, Who Are You: An All Star Tribute to The Who is a mixed bag. There are no outright disasters (though Pat Travers‘ comically overwrought “Behind Blue Eyes” comes close), but – while enjoyable and worth a spin – it’s not likely to earn a place as one of your favorite discs. In the end, when it comes to The Who, the best advice is to – if you’ll pardon the obvious wordplay – Accept No Substitute.