The 2012 Marshall Crenshaw Interview, Part One

Marshall Crenshaw has enjoyed – sometimes endured – a long and varied career. And while said career has been consistently lauded by critics, commercial success has sometimes proven more elusive. Add to the mix that Crenshaw isn’t the most cravenly commercially-oriented of artists (thank goodness!). But temper that with the fact that he consistently writes some of the most winning, accessible music in pop. His last album release experience left him unhappy (you’ll read about that in Part One of our conversation), and that dissatisfaction is part of what led Crenshaw to start a new Kickstarter-funded venture: a subscription-based series that will include a half-dozen EPs (we go into some detail about that program in Part Two). This is my third interview with Marshall Crenshaw, and he’s proven to always be an engaging and surprisingly candid interview subject. Here’s Part One of our December 2012 conversation. – bk. 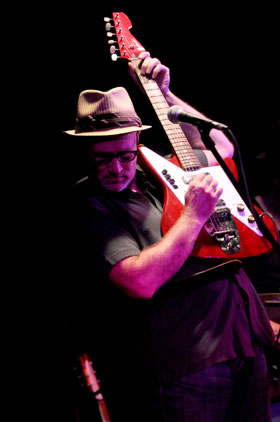 Bill Kopp: Way back in the mid 1990s, Todd Rundgren tried a direct-to-fans marketing/distribution model with PatroNet; as has happened with him a few times, it turned out that he was a bit too far ahead of the curve. But with Kickstarter and similar media, it seems like the direct link between artist and fan is something whose time has come. What drew you to this approach?

Marshall Crenshaw: I thought about that situation with Todd this morning! What drew me to it is that I can’t stop wanting to make records. [laughter] That’s it. And this is simply another approach to it, an attempt at another approach. But it’s one I really like the idea of – and the results of — so far. Including the music itself. I’m really happy with the whole thing.

BK: Big picture-wise, do you think the era of the record label – and all it supposedly offered to the artist – is dead or dying?

MC: Oh, boy. That’s a good question. No, I don’t suppose it’s over, but we don’t know what the endgame is for all of this. The labels have the recorded legacy of American culture; they own it, and that’s a pretty big thing. So there’s continued power in that. But I wonder; that’s a question that I ask myself, but I don’t really have a set of answers. What happened at the turn of the millennium with the labels was an implosion that’s been happening ever since. I’ve said this before: I think it was a matter of them having the tables turned on them; they tried to screw the consumer, and then they got screwed by the consumer instead. But it’s hard to say where it’s all going.

BK: Was there something specifically lacking in the marketing for your 2009 album Jaggedland that led you to take this more direct route?

MC: It turns out that it’s the next logical step. The whole thing with the label that put out Jaggedland was a bad experience. A friend of mine was, abut a year later, about to sign with that label. He called me and said, “Well, here we go.” And I said, “I’m sorry to tell you this, but you’re going to hate every minute of it.” and that was the case.

But the happy side of that story is that I got to make the record exactly how I wanted to make it. I think it’s my best album. But having said that, when I was done with that, I said, “I will never do this again.” And so, what next? So here we are.

BK: Not to pry into your business too deeply, but is this direct model financially viable for you? Or, put another way, is it lower risk and higher return than the old label model?

MC: Yeah. It seems so. The Kickstarter thing is so beautiful; it’s turned out so nicely. And we’ll see where we go from here. I don’t know; it’s really early now. I don’t know how it’s going to work out, but I know that the music’s going to be really nice. That’s number one. And I’ll be able to create these things. The rest is an untold story at this point.

BK: I’ve long been a vinyl fan; I bought your debut LP when it came out, and I continue to buy vinyl whenever I can. How important to your overall plan was having a vinyl format of the new EP?

MC: It was cool. I was really surprised at how I felt about it when I was actually holding one of the records in my hand. A few boxes of them were sent here so I could autograph them for the Kickstarter sponsors. And when I saw the thing and actually held it in my hand, I swear to God: it was like, “Wow!” I hadn’t experienced that in a long time; it has been quite a few years since one of my records came out on vinyl.

I’ve always liked records. When I was a little kid, I had these two older cousins, Carol and Marilyn. I was very close to them, and they were about ten, eleven years older than me. They were hardcore rock’n’roll fans; they would buy 45s constantly. And I was really drawn to these things, like a lot of people. And that turned out to be a lifelong thing.

I just think that analog sound and vinyl records are better. They are, y’know. I’ve always been fully on board with digital, but I think it kind of beats up on your ears and your nervous system in a way that’s the opposite of vinyl. It just puts energy in a room in a way that feels better, I think.