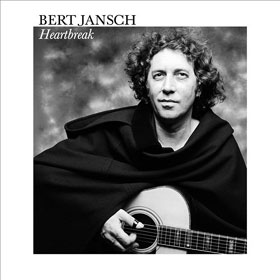 While American folk music has never had an especially deep resonance with me, the British Isles variant has long spoken to me somehow. There’s something about the European traditional flavor in UK folk, I suppose, that touches me. Many of the rock artists I’ve long treasured have had their music informed to various degrees by folk. Perhaps that’s why I’m more likely to enjoy a Nick Drake album (or a Jethro Tull record!) than something by Pete Seeger.

But I would never claim to be an aficionado nor an expert on the genre. Yes, in my voracious, never-ending quest to read about a wide array of music, Bert Jansch‘s name has come up countless times. Generally it’s in the context of citing the Scottish guitarist as an influence upon someone or other. But until I received the new reissue of his 1981 album Heartbreak (available from Omnivore on stunning clear vinyl in a lovely and sturdy gatefold sleeve that must certainly better the original), I hadn’t actually heard his work.

Seeing the release date, I had some misgivings: folk – as with many musical forms – wasn’t at anything near its apex at the dawn of the 1980s. Would Heartbreak be filled with then-trendy (and now hopelessly dated) production filigrees? Well, technically speaking, some of the things one might fear are indeed present, but damn if they don’t work,and well. Though it’s not credited as such, that sounds unmistakeably like Coral electric sitar in the hands of guitarist Albert Lee on “Up to the Stars” and “Is it Real?” among other tracks. And while Randy Tico is credited on the sleeve with playing “Fender Bass” (one supposes this is to warn purists that Heartbreak is not an all-acoustic affair), it sounds as if Tico shaved off the frets for these sessions.

Jansch’s voice is distinctive and achingly beautiful; he’s one of those singers – like the underrated Al Stewart, one of those artists who has been greatly influenced by Jansch – whose voice is instantly recognizable; hear a few seconds of him singing and you know it’s him. On Heartbreak, Jansch weaves his story-songs through delicate, fetching melodic landscapes. Far less quirky/bizarre than, say, Roy Harper, Jansch paints pictures with his music, often (as on the lengthy, truth-in-advertising-titled “And Not a Word Was Said”) leaning in a very bluesy direction.

A few participants’ presence warrant mention. The crystalline production of brothers John Chelew and Richard Chelew belies the fact that Heartbreak was their first sessions as producers. And despite her MOR reputation, Jennifer Warnes‘ vocal harmonies on “Wild Mountain Thyme” invites favorable comparisons to Sandy Denny‘s work on Led Zeppelin‘s “The Battle of Evermore.”

Jansch’s cover of “Heartbreak Hotel” is inspired; with his players he conjures a sensibility out of the song that neither Elvis nor John Cale could have ever imagined. His reading of “If I Were a Carpenter” is more conventional but no less beautiful. Throughout Heartbreak – though it’s nominally a folk record – Jansch and his fellow musicians create an aesthetic that rock fans should find quite warm and inviting.

Jansch’s career had its ups and down after Heartbreak, including some brief reunions with his former group, Pentangle. He succumbed to lung cancer in October 2011, leaving behind a solo catalog of some two dozen albums plus his work with Pentangle and as a guest on many other recordings.

Postscript #1: there is also a 2CD release of Heartbreak from Omnivore; it contains fourteen tracks compared with the original’s (and vinyl reissue’s) ten.

Postscript #2: I have received unofficial word that early vinyl pressings of the 2012 Heartbreak reissue are in erroneously-pressed “collapsed monaural.” I cannot verify this assertion with 100% accuracy, but to my ears, it’s quite possible. That said, true or not, my enjoyment of the vinyl Heartbreak is not diminished one iota.