The Record Collector Interview (of me!)

Tables have turned: today I humbly present an interview that appears in the current issue (December 2012) of Record Collector (UK). It’s a Q&A hosted by celebrated (as in, way more well-known than me) music journalist and author Joel McIver. The interviewee is me. It was a lot of fun to be asked to do this. You can find the current issue here.  – bk 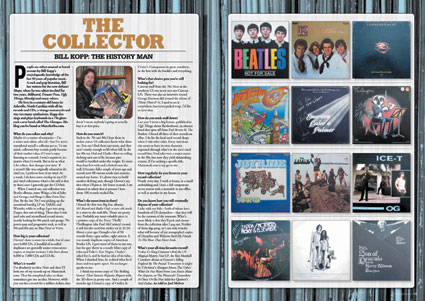 People are either amazed or bored to tears with Bill Kopp’s encyclopedic knowledge of the last 50 years of popular music. A rock/pop music historian, Bill has written for the now-defunct Skope (where he was Editor-in-Chief for two years), Billboard, Trouser Press, Ugly Things, Shindig!, and many others. He lives in a century-old house in Asheville, North Carolina with all his records and CDs, a vintage motorcycle and way too many synthesizers. Kopp also sings and plays keyboards in a 70s glam-rock cover band called The Glampas. His blog can be found at www.musoscribe.com.

What do you collect, and why?
Maybe it’s a matter of semantics – I’m a writer/editor, after all – but I’ve never considered myself a collector per se. To my mind, collectors buy records in part because of their market value; if I won’t enjoy listening to a record, I won’t acquire it, no matter what it’s worth.

But as far as what I do collect, that changes over time. If a record I like was originally released in the vinyl era, I prefer to have it on vinyl. As a result, I do have some overlap in my CD and vinyl collections; what’s a bit odd is that in those cases I generally got the CD first. I was a late-adopter as far as CDs: I bought my CD player in 1993. These days I have about 6000-7000 CDs and CDRs.

When I started out as a kid, my collection was Beatles albums, some Wings, a bit of John and George, and Ringo’s Blast From Your Past. Then I expanded to other things. By the late 70s I was picking up the occasional bootleg LP (on TAKRL, Wizardo and the like), and – like so many of us – in college I got into prog, Zappa…that sort of thing. These days I visit yard sales and used record stores mostly looking for 60s psych and garage, 70s powerpop and prog, and 50s/60s jazz on Blue Note or Verve.

How big is your collection?
I haven’t done a count in awhile, but it’s just over 6000 LPs, I think. A handful of so-called duplicates are generally mono vs. stereo copies, or import versions.

What is it worth?
I have absolutely no idea. Every now and then, I’ll look one of my records up on Musicstack.com. They list completed sales, so those sometimes give me an idea. Because while you can list a record for a million dollars, that doesn’t mean anybody’s going to buy it at that price.

How do you store it?
Back in the 70s and 80s I had them in melon crates (American collectors know what those are). You can’t find those any more, and they aren’t sturdy enough to lift when full, anyway. In the late 80s my dad and I built a floor-to-ceiling shelving unit. We made the whole thing out of 2×4’s, but had to use more expensive fir, because pine would buckle under the weight. It’s more than four feet wide, and is bolted into the wall. It ran out of room a couple of years ago, and records now fill various nooks and crannies in my home. It’s about time to build another shelving unit, though I haven’t any idea where I’ll put it. My house is small. I am ashamed to admit that at present I have about 100 records stacked flat. Oh, the dishonor.

In the months after my 2006 divorce, I moved several times. I wore out my welcome with my friends; did you know that a 12x12x12 box of records weighs about 78 pounds? They know. And they’ve asked me never to call again should I move.

What’s the rarest item in there?
I found the first two Big Star albums (#1 Record and Radio City) as “new old stock” in a store in the mid 80s. Those are pretty rare. Probably my most valuable pieces is a pristine copy of the Percy “Thrills” Thrillington (aka Paul McCartney) record; it still has the used-bin sticker on it: US$1.50. About a year ago I bought a lot of about 50 records from a guy online, sight unseen of course. It was mostly duplicate copies of American Beatles LPs – I gave most of those to my college-age son – but the guy threw in a near-mint copy of John and Yoko’s Two Virgins. I hadn’t asked for it, and he had no idea of its value. When I thanked him, he realized what he’d done and was quite upset. He no longer speaks to me.

I think my mono copy of the Rolling Stones’ Their Satanic Majesties Request with the 3D cover is somewhat rare. And a couple of months ago I found a great condition copy of Godley & Creme’s Consequences, in the box with the booklet and everything.

What’s that elusive gem you’re still looking for?
Caravan stuff from the 1970s. Here in the southern USA, one never sees any Caravan LPs. There was an interview record George Harrison did around the release of 33-1/3; I used to see it everywhere but never picked it up. I’d like to have that.

How do you track stuff down? eBay, shops etc?
Last year I did a big story (published in Ugly Things) about Brotherhood, an obscure band that spun off from Paul Revere & the Raiders. I found all three of their records on eBay. I do hit the local used record shops, and when I visit other cities, if time permits, I visit shops there. Every American city seems to have its own character as expressed through what’s in the used bins. Yard sales were a major source in the 90s, but these days those yield diminishing returns. You never know, though. If I’m seeking a specific title, Musicstack.com is my go-to site.

How often do you listen to your collection?
Nearly every day. There might be an occasional CD-only day, but those are rare. I work at home (in a small outbuilding) and I have a full component stereo system with turntable in my office, as well as another in my house.

How will you eventually dispose of your collection?

I joke with my kids – both of whom have component stereos and hundreds of LPs themselves – that they will be the curators of the museum. What’s more likely is that they’ll pick and choose and split the collection up after I peg out. Neither of them digs prog, so I can only wonder what will become of my autographed copies of Discipline and Welcome Back My Friends to the Show That Never Ends.

What’s your all-time favourite record, regardless of rarity?
That answer changes daily. Today it’s King Crimson’s Red, the American Magical Mystery Tour LP, the first Marshall Crenshaw album, or Genesis’ Selling England By the Pound. Tomorrow it might be Marquee Moon, The Tubes’ What Do You Want From Live, Music for Airports, or The Plimsouls’ Everywhere at Once. Or the Nat Adderley Quintet’s Soul Zodiac.

As told to Joel McIver.