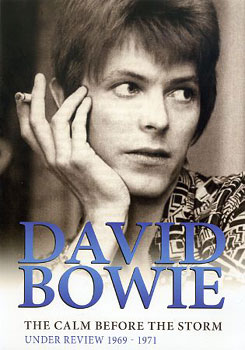 It’s a shopworn cliché to claim that David Bowie is and has always been a chameleon. Yes, his music and onstage/public person have gone through a series of calculated ch-ch-changes (there; got that out of the way quickly), but his work has proceeded I nan arguably very linear fashion. Another in the long series of “under review” type DVDs, David Bowie: The Calm Before the Storm applies a critical perspective to Bowie’s first four albums.

Drawing upon the now familiar (or familiar to anyone who’s watched as many Chrome Dream productions as I have) battery of music journos, former collaborators and occasional scenesters, The Calm Before the Storm moves quickly through assessments of Bowie’s early recorded output. After dispensing with his David Jones and the Lower Third work in a cursory fashion (to be fair, it doesn’t deserve more), the film examines his self-titled debut, arguing that it was influenced by equal parts Anthony Newley and Syd Barrett. Your mileage may vary, but I hear a lot of Newley and not much Syd in numbers like “Love You Till Tuesday.”

After that record went nowhere, Bowie worked harder on his songwriting, hooked up with producer Tony Visconti and created another self-titled album, this one much more in a Donovan vein. But when events conspired to help make “Space Oddity” (a track that Visconti passed on) a hit, that album – re-released as Space Oddity – helped launch him into the commercial stratosphere.

But after the second LP’s initial release, it was time for another change. The Man Who Sold the World is described in this critical review DVD as “dark,” “drug-addled” and in other arguably negative terms, but it’s more of a piece with what would come later than anything else Bowie did on his other early work. The fourth album, Hunky Dory, is widely (and on this DVD) hailed as the finest release of Bowie’s early career, but I’ve never been all that fond of it: it’s too precious by half, far too dated (unlike “The Man Who Sold the World,” which sounded as fresh when Nirvana covered it as the day it was written), and a bit too English Music Hall for my tastes. Plus, Mick Ronson got more guitar parts on The Man Who Sold the World than on Hunky Dory; the former rocks while the latter rarely does so.

The Calm Before the Storm is relatively brief at just over an hour. The bonus material – nothing astounding – adds a few more minutes. The talking heads chosen for this project do know their subject, though. Kris Needs is particularly insightful, as is (via archival footage) the late John Peel. A number of Bowie’s early musical collaborators (he might call them sidemen) add a good deal of interesting information; they argue convincingly that Bowie’s not so enigmatic as he’d have you believe. And Australian-born, UK-based music journalist Andrew Mueller does a first-rate job of creeping this viewer out by looking, sounding and acting uncannily like the late and sorely missed Paul Hester (Split Enz, Crowded House).

Sometimes the visuals don’t make a helluva lot of contextual sense; this is an unfortunate hallmark of the otherwise solid Chrome Dreams productions. They want to show you something interesting while the audio of a relevant song plays, so they sometimes slap on whatever’s at hand. In the case of “The Man Who Sold the World,” it’s a clip from Carol Reed‘s cold-war noirish 1949 thriller The Third Man, a scene with Joseph Cotten and Orson Welles. What that has to do with a Bowie song from the dawn of the 1970s will remain a mystery.

The Calm Before the Storm feels like – and almost assuredly is – the first in a series of critical overviews of Bowie’s work. It doesn’t cover the most interesting phase of the man’s recording career, but it’s a necessary prologue to what would follow.