Bill Kopp: I think Shoes fans – especially ones outside the Midwest – think of you more as a studio band. Why don’t you play out more, or tour?

John Murphy (bass/vocals): Going back to Elektra again, the labels in those days didn’t have much to do with a band’s live thing; that was our trip. In a lot of cases, they didn’t even want us to play live. But we were excited to do it. 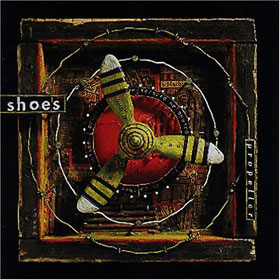 The whole thing about playing live is this: it’s one of those things for which there are no short cuts. Once we get cracking, and do show after show – and we were doing that in the early and mid 80s – it’s like second nature. We roll with the punches, with the problems that happen. But later on, what complicates that is when it’s not the only thing you’re doing – when you’re holding down a forty-plus hour a week job, or you’re married, whatever it is – all these things make it tougher.

A few years ago we had a chance to go to Japan. We thought, “How are bands affording to do that?” But we had something put our on Air Mail Records over there, and Hiroshi Kuse approached us and said, “I’ll spring for the flight, the hotel, and most of your food. I won’t pay you for the gigs.” We knew that he was doing more by paying for this other stuff. So we rehearsed for weeks, and got our drummer who lives in Menominee, Michigan – five hours north of us – and we did it.

We did promote Propeller with shows, and we did dates to promote Stolen Wishes (1989). And I understand how when somebody does 200 gigs a year, you get good. 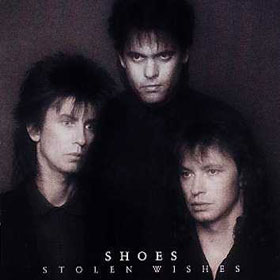 We lost our clubhouse when we sold our studio. We took that for granted; we had our amps set up there, and could rehearse. Now, it’s more complicated; we do a combination of Gary’s house, and Jeff’s place. We did figure it out, and we do play live. But to spend weeks of rehearsal to do one show is difficult. I’d love to go out and do a tour that was put together by some professionals, so that we didn’t have to do the planning. Lately – and by lately, I mean for the last 20 years – if we don’t do it, it doesn’t get done.

So I think people have gotten the wrong impression. We’ve done a fair amount of gigs.

BK: I mean this in the best possible way, but the sound – the songs, the playing, the singing, the arrangement, the production – on Ignition doesn’t differ a whole lot from what Shoes sounded like in 1979. I think it’s a timeless, signature sound. Is that a conscious goal of the band, or is that “just how you sound?”

JM: I think it is conscious. We have the same goals collectively and individually, the same direction. I think we are fairly good self-editors. If one of us brings in an idea that might be a little questionable, there are two other guys there who can say, “Well, maybe if we do it a little more like this…” But it really does help that our [musical] goals are the same: creating a relatively tight, concise and catchy tune.

It might sound simplistic to say that. But working within a traditional palette – though we do often bring in “exotic” instruments like a piano [laughs] – works for us.

This is the first record of ours that John Richardson has played drums on. He’s been our drummer for eighteen years! And so drums are a more important part of this record; we’re not always filling the cracks with more guitar or something. He puts in some cool rolls, things like that.

There are a number of crucial things, I think, that make people when they hear Ignition say, “Yeah, it sounds like Shoes, but it’s different, too.” We learned long ago the value of economy. Like on vocals: we can and often do vocal harmonies, but not on every song. You don’t want every song to have a Queen chorus kind of feel. We’re always aware of hooks, and of only adding things that serve the song. We’re not trying to showcase our guitar playing, or bass playing. Etc. The song is the end result.

BK: “Hot Mess” on the new record reminds me a little bit of T. Rex, of the whole glam sort of thing. It’s a little bit of a departure from your signature style. When you write, do you sort of hear Shoes playing the finished song in your head, or is it a more open-ended process than that?

JM: Well, when I hear a new song of Jeff’s or Gary’s, I hear a demo recording of it; they’re the engineers, so they do that. So there’s a guitar, a rough bass line, maybe a drum machine, and a vocal. So it’s pretty well sketched-out. But when I bring a song, I’ll start – usually with Gary – and tell him how I think I want the song to go. I’m kind of banking on the collaborative effort. Sometimes there’s some minimal drama – confusion over who’s going to do what – but I get my end together, and come in with options for what the other guys can do. In the end, if one of us really wants to take a song a certain place, and it’s his song, that’s where he takes it.