Note: many more photos from this night are in my previous post.

The first night of Yep Roc 15 was superby stage-managed: with the program slated to start at 8pm, master of ceremonies John Wesley Harding strolled onto the stage right on time. And within four minutes the music began. Harding’s witty banter (much of it off the cuff) would keep the audience’s attention between sets, and he would graced us with a few solo numbers. (I wish we had gotten a full set from him.) Comic Eugene Mirman would join Harding at various points throughout the evening. I laughed at some of Mirman’s material, but a survey of the crowd yielded mixed reactions.

Jukebox the Ghost look and sound a bit like vintage Ben Folds Five. The three-piece doesn’t go for the high-concept approach; their lineup is guitar/keys/drums and opposed to Folds’ quirky bass/keys/drums configuration. And the band’s songs don’t mine that clever/snarky vein that Folds did so well; their songs are more in the bright, poppy and sentimental territories. As the first musical act of Yep Roc 15 (not counting the Wednesday night pre-party at Local 506 – which I did not attend – featuring Los Straitjackets, The Fleshtones and Southern Culture on the Skids), Jukebox the Ghost kicked things off with a nice mix of energy and drama. Their vocal harmonies are a highlight of the band’s onstage presentation. But the highlight of their set (roughly 40 minutes, the standard set for all but headliners as YR15) was near the end. They brought out a bunch of teenage singers, a group called The Chorus Project, and gave a lovely, gospel-flavored reading of Nick Lowe‘s “(What’s so Funny ‘Bout) Peace, Love and Understanding.” The crowd – not quite at capacity yet, but getting close – was clearly moved.

Eleni Mandel appeared in a white dress (she called it the Yep Roc 15 “cake”) and sporting a travel-size acoustic guitar. Her acoustic-based songs were in turns clever and catchy, and hers is a strong, clear voice. In terms of energy level, her set was a comedown after the soaring set closer form Jukebox the Ghost, but it did set the tone for the evening, a mostly (but not completely) singer/songwriter-themed lineup. She would return later to better effect, in my opinion.

I had seen Chuck Prophet the night before in Asheville, opening (if you could call it that) for Nick Lowe. Prophet’s Grey Eagle set might better be described as the first act of a double-header; he was fantastic. Both nights, with nothing more than his voice and an acostice guitar – well, a bit more – he delivered a set of songs that packed a punch both musically and lyrically. With the aid of a second microphone through which his vocals were treated to various effects, Prophet mimicked the vibe (but not the sound) of a larger band. No loops or anything (though there would be plenty of those at Yep Roc 15) for Chuck Prophet. A great storyteller with an engaging onstage personality, Prophet was firing on all cylinders as he played song from his deep catalog, including several from his latest, Temple Beautiful (on, of course, Yep Roc). Interesting, as I’d learn later, this acoustic set only showed one of the idioms in which Prophet is amazingly effective. His energy was contagious, and got an enthused audience even more excited.

Robyn Hitchcock came out next. I should point out that his solo acoustic sert was superb, and that he was in fine form the entire set, joking in his quirky, slightly inscrutable manner. I was thrilled ot have seen him onstage (my first time). That said, I beg forgiveness for being slightly – but only slightly – disappointed that (a) he didn’t instead perform an electric set with a full band and (b) he concentrated on his newer material, playing nothing from his Soft Boys or Egyptians days. He also passed up any opportunity to deliver one of his trademark bizarre monologues (well, he did a bit of that, albeit briefly). I understand that expecting those things would have been unreasonable. Just sayin’. In any event, I’d get something close to my wish later that night. And Hitchcock was joined onstage for several numbers by Scott McCaughey, brandishing his Rickenbacker 4001 and helping out on vocals. So don’t get me wrong: all in all, a great set.

With his deep voice and classic country demeanor, Dave Alvin could have delivered a set heavy on honky-tonkin’. But being Dave Alvin, he served up a more varied set than that. Joined on several songs by a female vocalist (a member of Alvin’s Guilty Women whose name I did not note), Alvin was quite engaging.

Nick Lowe was every bit as wonderful as he had been the night before in Asheville. These days he’s something of a musical Elder Statesman, and an honorary Americana artist. His set felt short because the songs were so engaging. 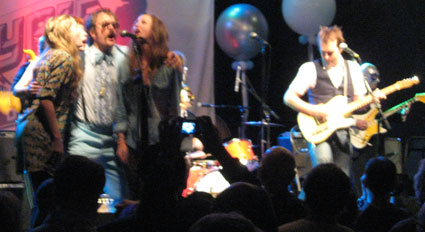 But next up was for me the evening’s highlight: Los Straitjackets. In addition to their surf-twang instrumental numbers, the band served as muscular musical backing for a thrilling array of performers. Eleni Mandel joined the band for a couple of numbers, and was more effective in that setting than in her acoustic-based set. Dave Alvin fronted the band for a few number. The powder-blue-70s-tux-wearing “Ritz Carlton” – he of the porn moustache and aviator sunglasses – led the band through an over-the-top reading of “River Deep, Mountain High” before descending into the crowd. Nick Lowe and Robyn Hitchcock came out together and covered a relatively obscure (at least to American audiences) number from Johnny Kidd and the Pirates. But the highest energy of the high-energy Los Straitjackets part of the evening was Chuck Prophet’s return. With Telecaster in hand, he tore through the title track of Temple Beautiful, aided by rousing shout-along vocals from Carlton and three female backing singers.

(Kudos to Chuck Schilling for his superb audio-video work)

But perhaps the most moving part of the evening was the presence of Daddy-o Grande (aka Danny Amis) back with Los Straitjackets. Amis has been battling (successful, than goodness) cancer this last year or so. He’s back and in top form, delivering rapid-fire riffage and his traemark “damas y caballeros”-filled, hilariously gringo-accented Español.

Nothing could top the final hour-plus of the evening, and nothing tried. Just after 1am, the music ended.

Watch this space for reportage of nights #2 and 3 of Yep Roc 15 from Carrboro NC.