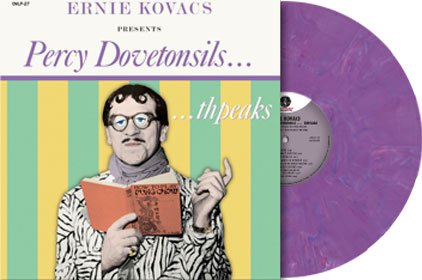 Critics and other observers of pop culture have a number of labels to which they (and by “they” I mean “we”) turn when attempting to classify works of entertainment. One of these is Incredibly Strange. And that epithet is as apt a label to apply to a new release, a long-lost unreleased comedy record by Ernie Kovacs.

Kovacs is rightly heralded as a “televisionary,” and his particular outré brand of comedy was barrier-pushing when he was on TV in the late 50s and early 60s. He’s now regarded as a major influence on the style of television personalities including David Letterman. His style was odd, often seemingly-ad-libbed (even when it wasn’t), and, really, just – for its time – incredibly strange.

One of the recurring characters into which Kovacs would slip during his program was that of Percy Dovetonsils. And there’s really no way to describe Percy without admitting the obvious: he’s a broad parody of the late 50s stereotype of what they used to call a “confirmed bachelor.” Yep, like Liberace. Get what I’m gettin’ at?

So on one level, it’s hard to understand why in 2012 a record label would release an album of mock-poetry by Kovacs in his mincing, fey and hopelessly dated (and politically oh-so-horribly-incorrect) persona. But two facts argue in favor of Ernie Kovacs Presents Percy Dovetonsils…thpeaks getting this modern-day release. The first is simply that Kovacs is such an important figure in both television and comedy. The second is that, well, this album is pretty rare. Kovacs recorded it 1961, but it never got released, and the tapes of the unfinished album went missing until they were unearthed recently by archivist Ben Model. Content aside, Percy Dovetonsils…thpeaks is too historically important to remain unreleased. I’m convinced.

But what of the content? Well, it’s certainly dated, and it’s not among the most rip-roaringly hysterical comedy material you’ve ever heard. But it is clever. If one can – at least in part – set aside any bristling, squirming or other negative reactions to the presentation, what remains is a collection of poems that, well, make fun of poetry. Kovacs recites his ditties – many of which are titled “Ode to…” this or that – and does so with relish. Most of the pieces seem to fall into fairly standard poetic meter (the sort familiar to lovers of limericks and detractors of Helen Steiner Rice‘s maudlin greeting-card “poetry”), but nearly every one suffers – intentionally, I’m guessing – from a breakdown of that meter. “Too many” words stuffed into a line, or an odd rhyme that uses an inappropriate word simply because it fits someone’s idea of a rhyme scheme.

Put simply, in his Percy Dovetonsils guise, Kovacs takes the piss out of poetry. He introduces every poem by telling us its title, and reminding us that it’s “by Percy Dovetonsils.” Henry Gibson would pick up this approach and reuse it with nearly no modification during his stint on Rowan and Martin’s Laugh-In, a show that bears the influence of Kovacs’ style. 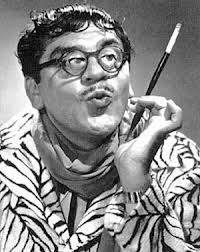 Interestingly enough – I’ll invite you to read the full details in the liner notes – the archivist who discovered the long-lost unfinished album is also a fine pianist. Kovacs left behind some important supporting documents for the album, including a suggested running order and notes that made it clear he hoped to have some solo piano backing on some tracks. So – in keeping with the spirit of Kovacs’ vision for Percy Dovetonsils…thpeaks, Ben Model recorded those “underscore” pieces. The results are remarkably well-fitting for Kovacs’ recitations. Not quite jazz, they’re more of a parlor-room Vince Guaraldi style, and Model’s sense of phrasing uncannily follows Kovacs’ speech and spoken phrasing.

My advice is to approach this album – which is well worth your time – with an open mind. Think, if it helps, of the wide appeal Paul Lynde and/or Rip Taylor had in years gone by. Remind yourself that 1961 was more than a half-century ago. Taken with that approach, Ernie Kovacs Presents Percy Dovetonsils…thpeaks is a historical treasure, and one of the most incredibly strange ones at that.

Note: The album is available on 180-gram vinyl rendered in a lovely lavender-splatter motif. It has to be seen to be believed. The LP version comes with a digital download card, and the download features a clutch of bonus tracks, mostly taken from audio recordings of Kovacs’ television shows in which “Percy” appeared.