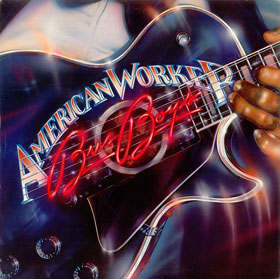 In honor of Labor Day here in the USA, I’m taking a day-long break from regular posting on the blog. (Yeah, 350+ words constitutes a “break” from my point of view.) But I can’t go a weekday without chiming in about something music-related, so I’ll mention a group I had the pleasure of seeing waaay back in 1981. The venue was Atlanta’s Agora Ballroom, and since Georgia had recently changed its laws making alcohol legally available only those 21 and over (I was a lad of a mere eighteen at the time), the requisite fake ID was required to gain entrance to the Agora. (And no, I didn’t drink. I was there for the music.)

The band on this particular night – I went many other times, seeing The Blasters, Split Enz and other much-loved acts – was The Bus Boys. The group’s image was a little gimmicky, but not in a cynical, calculated way: they were a group of African Americans (with a Latino drummer) who played rock’n’roll. To audiences in the early 80s – not well-versed in the histories of Little Richard, Chuck Berry and so forth – this seemed quite the novel concept(!) They were really good, with sold playing, and multiple vocalists, giving them the opportunity to move in any number of musical directions. Their debut album Minimum Wage Rock & Roll remains a favorite of mine, mixing as it does humor, driving rock, and some pointed social commentary.

The band got a bit more exposure when they were feature in the Eddie Murphy film 48 Hrs. But it’s for their second album that I think of them on this day. The even more pointed lyrical concerns of the songs on American Worker dealt with the concerns of typical Americans who head to and from work every day, just trying to keep their heads above that metaphorical water.

So forgive the poor dub quality, and enjoy “American Worker” from The Bus Boys. Happy Labor Day, and a salute to my fellow Americans. (And let me point out: the way they jump around in the video: they were just like that onstage. A rousing, highly memorable concert.)