Off the Road Yet On the Road: A Talk with Alvin Lee, Part Two

Bill Kopp: The title and cover art of your new album Still On the Road to Freedom overtly reference your 1973 collaboration with Mylon LeFevre. Beyond the text and visuals, what is the connection between the two records? 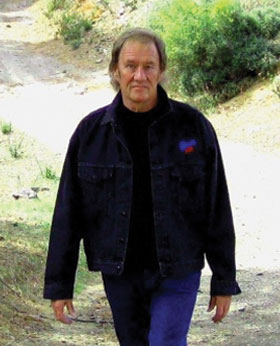 Alvin Lee: There’s not really a connection. The only connection is that in 1972 I wrote the words to “On the Road to Freedom,” and what I’m saying now is that I’m still on that road. I still haven’t got there. There’s only that one song that’s relevant [to the old record]. The rest of the album is new music, the sort of things that comes out as my music today. I’m not trying to do a sequel, a follow-up.

BK: If someone asked me to describe the music on Still On the Road to Freedom by applying a single genre label to it, I couldn’t do it. There’s country rock, blues, Bo Diddley style rock, quiet acoustic numbers, on and on. Do you think that – in an ironic way – that the end of the record industry as we used to know it has meant that artists are free to follow their muse where it takes them, rather than being expected (or required) to turn in twelve songs in a single style?

But record companies today, if you sign with a big record company, they practically own the artist. They tell them where to go, what TV [shows] to do. It’s actually worse than it’s ever been. But of course there are more bands playing on a smaller level. They have record companies that will pretty much put something out if they like it. They’re not dealing in hits any more. And they’re not spending $200,000 on promotion.

So, yes and no. There is more freedom for bands to record; it’s something I’ve always fought for. The record company comes and says, “We want an album that’s the same as the last one,” and I say, “Tough. I’m gonna send you one that I like. And I hope you like it. If not, don’t release it.”

BK: When I was a kid, I often heard the label “fastest guitar in the west” applied to you. I don’t remember now where I heard that. But while you don’t always do so, you can play really fast, like on the new track “Back in ’69.” Back in the day, do you think that there was an expectation – when people came to see and hear you with Ten Years After – that you’d have to play like that? To show just that one side of your talent, the flash side? 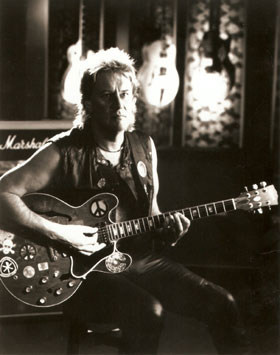 AL: To a degree, that was a part of the freedom I was searching for, too. They used to call me Captain Speedfingers, too; I didn’t take all that seriously. There were and are many faster guitarists than me. People like John McLaughlin and Django Reinhardt: unbelievably nimble. But with me, I think it’s because of the way I play. Light and shade. I’ll play it cool, and then I’ll hit some rocket riffs. And that makes the rocket riffs sound more effective.

I’ve been to see some great guitarists – I won’t mention any names – who clearly must practice twelve hours a day. But after ten minutes, you’ve heard everything they’ve got.

BK: On Saguitar you played most of the instruments yourself. On this latest, you still do a lot of the work, but you have brought in players for most tracks. How do you think that changed the nature of the music?

AL: I think the new one has a more realistic feel. On Saguitar, I was “concocting” a real feel. I used computer drums and did play most of the instruments myself. I have always had a fascination with Les Paul, the way he used to overdub his guitar fifty times. So it was partly that: trying to see how real a sound I could get by myself, making it on the computer. And I think it was pretty good; I spent a lot of time and effort to get the right feel, to capture that interplay of the various instruments. On the new album I’ve got Pete Pritchard on the bass, and Richard Newman on drums. So it’s got more of a live feel to it.

BK: Are there any plans at all for some North American dates in support of Still On the Road to Freedom?

AL: None planned as of yet, but I’ll play anywhere someone wants me. It’s hard, though. You’ve got to get visas, air tickets. It’s a big deal. You can’t just pop over and do one gig. That’s what I do in Europe, though: I do a festival on a Saturday night – or any night, basically – and keep my hand in that way. But those tours of five or six nights a week, I’m not up for that any more. It kills off the fun of making music. Touring with a rock’n’roll band becomes boring, and then you’ve got a big problem on your hands. I never really wanted to be a rock star…

…Actually, I don’t want to lie. When I was really young, I wanted to be a big star and make lots of money. But it seems that the reality doesn’t ever quite match up to the dream. Once you get there, it’s not just about having fun. It’s a lot of responsibility, and a lot of pressure. That builds up on you, and sometimes you turn to drink and drugs. And those don’t make things any easier.

BK: Your discography notes that you “do not play with the band currently recording as Ten Years After.” Is this one of those situations where ownership of the band name is contested, or is it something else, something more cordial?

AL: Well, it could have been cordial. But I was really not happy with what they did. It was behind my back, and all very sneaky. But those guys spent as much time on the road all those years ago as I did, so they have some right to do it. I just wish they had called it something else, like Ten Years After II, or something like that.