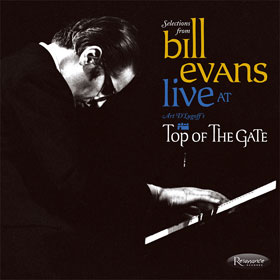 The music of Bill Evans (and The Bill Evans Trio) is perhaps not the best place for a novitiate to begin exploring jazz. Evans’ approaches to phrasing and melody are not rooted in traditions that will feel familiar to fans of rock, blues, soul, country, gospel or pop music. With regard to phrasing, the late pianist – and his bandmates on upright bass and drums – more often than not played around (not on) the beat, and that beat was often implied rather than stated. The term “rhythm section” is often applied to the drums/bass duo, but in Evans’ music (as in much of jazz, it must be said) the drummer and bassist rarely do anything as simple as hold down a backing rhythm for a soloist.

And to call Evans’ melodic sense complex is to traffic in extreme understatement. The pianist’s left and right hand work often seem to exist in separate, parallel universes. Somehow nearly always perfect together, the music created on the piano by his left and right hands rarely work together in conventional ways. If one can train the ear to focus on just his left hand, one will hear a deft, precise and exciting edge-of-mayhem performance. Now focus on the right hand, and the same thing happens.

As is often the wont of the jazz musician, in Evans’ hands familiar songs are but a musical canvas for musical excursions. A well-worn chestnut such as “Autumn Leaves” or “Someday My Prince Will Come” is rendered almost unrecognizable – but every bit as delightful – by Evans’ trio.

By 1968, the most celebrated lineup of Evans’ group (known by aficionados as The First Trio) was no more: bassist Scott LaFaro had died tragically in a vehicle accident, and was replaced for a time by Chuck Israels, and drummer Paul Motian had gone on to play with a long line of other jazz heavyweights. Beginning in 1966, Evans added bassist Eddie Gomez to his trio, and in 1968 drummer Marty Morell joined. This lineup would remain together into the mid 1970s, the most stable of all Bill Evans Trio configurations.

Not long after the three began working together, they did a series of dates in New York City’s Greenwich Village. And on October 23, 1968, a local college radio station recorded a pair of sets by the group. Broadcast only once, those tapes went largely unheard for more than 40 years. But the new 2CD set on Resonance Records – a label earning rave notices for its unearthing of great jazz rarities such as a very early Wes Mongomery set – an album titled Bill Evans Live at Art D’Lugoff’s Top of the Gate documents a stellar, representative live performance of that trio.

Though Evans, Gomez and Morell were (of course) playing acoustic instruments, 22-year-old George Klabin carefully positioned microphones to capture the performances in thrilling wide-panned stereo. This set isn’t a concert per se; diners can be heard chatting, clinking glasses, occasionally milling around, and (more often) registering surprisingly tepid applause for this soon-to-be-legendary trio.

The first set is (in relative terms) a calmer, more subdued set of performances. The standards are here: “’Round Midnight,” “My Funny Valentine,” and they’re delivered in the Trio’s inimitable style. Pop/show tunes are on the set list as well, making the point that this is a show in front of a dinner crowd. The second, later set is a more spirited, energetic and exploratory set. Only two songs are repeated from the earlier nine-numbers set. The Trio is often on fire (though fire of a very subtle sort), but again the audience registers only mild approval. For the modern listener, beyond some understandable indignation on behalf of the Trio, this is a very good thing: the audience never intrudes on the music; instead, the occasional noise only adds to the ambience and character of the set.

Packaging on Live at Art D’Lugoff’s Top of the Gate is impeccable: in addition to a sturdy, classy tri-fold sleeve, the package includes some wonderful vintage photographs (of the Trio and the venue) alongside seven – count ’em, seven! – enlightening essays and detailed liner notes. This essential collection is one set that Evans enthusiasts won’t want to miss.