Home  »  interview   »   A Conversation with The Avengers’ Penelope Houston, Part 1

A Conversation with The Avengers’ Penelope Houston, Part 1

One of the most notorious and legendary Sex Pistols gigs was their final date of their US tour. Onstage at San Francisco’s Winterland, they ran through a typically shambolic set, and as guitar feedback howled at the tail end of a run-through of The Stooges‘ “No Fun,” Johnny Rotten (soon to revert to his given name John Lydon) smirked and asked the crowd, “Ever get the feeling you’ve been cheated?”

Those who attended that January 14, 1978 performance couldn’t have felt cheated: not only had they witnessed the Pistols onstage (something precious few Americans could claim to have done), but if they showed up early enough, they got to see the opening act, local heroes The Avengers. 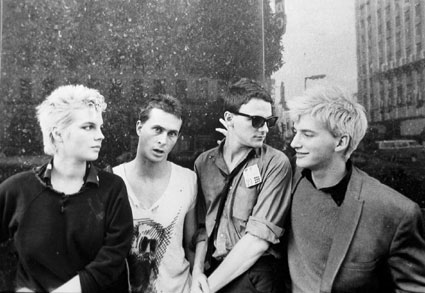 Fronted by a then-nineteen-year-old Penelope Houston, The Avengers were an uncompromising punk act of the first order. In their own way, The Avengers were as political and provocative as the Pistols; their anthemic “We Are the One” is more clear about what “we” aren’t (Catholics, fascist pigs, Jesus Christ, etc.) yet somehow it remains a Statement. Greg Ingraham‘s buzzsaw guitars and the relentless speed-demon attack of rhythm section Danny Furious (drums) and Jimmy Wilsey (bass) provided an in-your-face sonic backdrop for Houston’s aggressive yet (somehow) youthfully innocent vocals.

The band never made an album-proper, though various studio, live and bootleg/live tracks were posthumously cobbled together to form a nonetheless great self-titled album (aka The Pink Album). The Avengers themselves lasted only eighteen months after the Winterland gig. Houston would go on to a solo career that took her music in what may have seemed at the time a surprising direction.

Drawing on the folk side of rock, Penelope Houston’s solo albums often had more in common with Nick Drake or Joni Mitchell than anything on The Pink Album. (As it would turn out, there were a few sonic clues to Houston’s more melody-oriented direction, but those tracks wouldn’t become widely available until much later. A 2012 2CD reissue of The Avengers includes the original album plus a “bonus” disc that’s longer and of arguably comparable music quality. 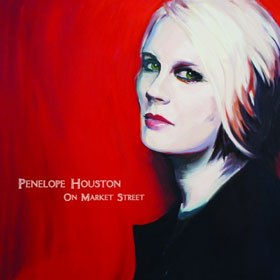 While varied in style and texture, Penelope Houston’s solo work is characterized in large part by its trademark juxtaposition of sweet, catchy (and/or hooky) melodies that back acerbic, wry lyrics. And there’s still plenty of rock’n’roll alongside the Americana-flavored singer/songwriter style tracks on Houston’s latest, On Market Street. I asked her what she sees as the unifying element that runs through her music. “The common thread is my attitude toward life,” Houston says. “My point-of-view. There has to be something in there that hopefully expresses the way I see the world, and,” she laughs heartily, “how the world can do better.” (“I can’t believe I’m saying this,” she adds, laughing again.)

“But I do have a bit of an attitude, and that comes through. Sometimes,” she observes, “It’s funny, and sometimes it’s bitter. It’s not like I’m only saying one thing all the time, but there’s definitely a critique, a darkness to a lot of my lyrics. But at the same time, I have a sense of humor about life. And I would hope that all of those things are visible and understandable in my lyrics.”