Home  »  interview   »   That Time is Now: A Conversation with The dB’s Peter Holsapple (Part One)

That Time is Now: A Conversation with The dB’s Peter Holsapple (Part One)

In early June 2012 The dB’s released Falling Off the Sky, the band’s first new studio album in a quarter century, and the first in thirty-plus years to feature the original lineup. I spoke with guitarist Peter Holsapple about the new album. Here’s our conversation. – bk

Bill Kopp: It seems like I first heard rumors about The dB’s getting back together around the time of the second record you did with Chris Stamey, 2009’s hERE aND nOW. And while the songs on Falling Off the Sky are certainly more rock-oriented, many of them seem of a piece with that record. In fact, some of them – perhaps this is more true of Chris’ numbers – would have worked quite well on that album or a followup, if arranged slightly differently. When you’ve been writing songs, would you think, “This one’s potentially a dB’s song,” and so on, or not?

Peter Holsapple: Well, I think we tend to think of ourselves as having something of an innate ability to sort [the songs] out between duo records and band records. But, you could say something like, “Well, what about ‘Santa Monica?” from hERE aND nOW, which has Gene [Holder, bass] and Will [Rigby, drums] on it. That was recorded as a dB’s session. But the feeling was, when we got through with it, we weren’t sure that it sounded like a dB’s record. So we put it on that record instead. But I think ordinarily we try to be pretty aware of what makes a dB’s song different from a Holsapple/Stamey thing. I think there’s a more aggressive aspect to dB’s songs. I’m not really sure what the qualities are, exactly, but it’s one of those things where you just know when it’s right. And I think we did pick good dB’s songs for this record, without a doubt.

BK: “World to Cry” was done back in 2005. That’s seven years ago! But somehow it sounds perfect on the new album, not at all like something that was laying around. Is it my imagination, or is the mix slightly different between the album version and the one that’s on the dB”s site since 2005?

PH: Yes, it is slightly different. We wanted to make sure that everything on Falling Off the Sky sounded like it fit together. “World to Cry” was one of the first things we recorded for this. I think we recorded it at the same time as “Send Me Something Real.” The wind-up for this pitch has been going on for several years! But as I like to point out, we’re still well under the Chinese Democracy age limits for an album. I think we’re within the statute of limitations.

BK: Hopefully, that’s the only similarity between the dB’s and Guns N’ Roses…

PH: We can only hope.

BK: The songs on Falling Off the Sky – all of them – are sticking in my head. I’ve played my advance copy easily fifty times, if not more. Really strong hooks both musically and lyrically. Do you consciously try in your songwriting to put hooks in, or is that just the way the songs come out?

PH: Well, I can only speak for myself. I don’t know what Chris does, exactly. For me, when I’m writing a song, I just try to allow whatever muse sent me a vision, y’know? It’s like the Tom Petty idea that we’re just all receptors of the radio waves coming out. So I’m just a very fortunate guy in that I’ve had a lot of hooky things come from me. There are plenty of songs of mine, I’m sure, that you could say are completely devoid of anything memorable. But my batting average has been pretty high. 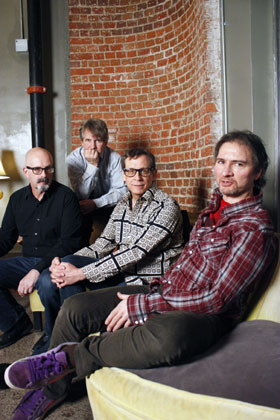 BK: Will Rigby‘s “Write Back” is a really strong tune, really endearing. So if you and Chris are Edmunds and Lowe, or Difford and Tilbrook, or Lennon and McCartney, then he’s George Harrison, right?

PH: I would say George Gershwin. I think he may actually be the best songwriter in the band. Paradoxaholic, the last record that he put out,…gosh, it’s good. Really, really excellent songwriting. He worked with some really good New York players, too. He did a single a couple of years ago called “Who Shot Luke the Drifter Jr.?” and that’s another really great song. He’s got the wordplay, he’s got the melodies, he’s a smart songwriter. And I’m really glad we were able to get a song of his on a dB’s record, because it fit in perfectly along with everybody else’s.

BK: When I interviewed you around the time of hERE aND nOW, we talked about the process of songwriting, and you made it clear than you and Chris don’t write songs together, but that you do collaborate on arrangements. I would argue that that’s the “glue” that sort of brings the songs – which are very different – together. Would you agree? Is that still the case on this latest album?

PH: Yeah, we certainly work together. And that’s basically how we’ve tried to do it over the years. Everybody sort of knows what’s best for their songs, and there’s often an overriding veto power. We fight for what we think is right for the songs. On a song like “She Won’t Drive in the Rain Anymore,” Chris and I went back and forth about the string arrangement which he had done. And I was very pleased with that, but I wanted to change it a little bit. We try not to be too possessive about the songs; we do try to go for what the best sound would be for every song. And I think we ended up with a good, cooperative arrangement that everybody was happy with.

We hear things differently, I think. Chris is a schooled, trained composer, and I’m just an itinerant garage rocker. And it’s not that either one is any better than the other; it’s just how it is, how our minds work. And we’re grateful for what the other one is able to see and hear. Because we would ordinarily miss it.