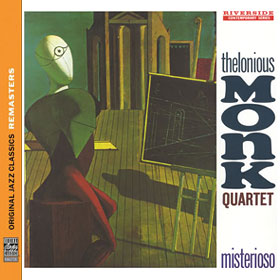 Serious rock fans know the tale of Big Star. The Memphis group – led initially by Chris Bell and Alex Chilton – released two (or three, depending on whether one considers Third/Sister Lovers part of the canon) albums in the 1970s, and all three were greeted by commercial indifference (and some bad luck). Years later, the brilliance and wide-ranging influence of Big Star’s work is beyond argument. But that realization came too late to do much good for the band.

Now, I’m not suggesting for a moment that Alex Chilton is on a par musically with jazz pianist Thelonious Monk (I’m also not suggesting the reverse is true; apples, oranges and all that). But from what I’ve read – I’m no jazz expert – Monk didn’t get his due for most of his career, and his unique genius only began to get proper recognition long after he had done his best work.

In some ways, it’s easy to understand why: on first listen, and to the uninitiated (hearing his music for the first time, without the benefit of historical context we modern listeners take for granted) Monk’s peculiar style could seem offhand, slapdash, casual, sloppy. In truth, it’s nothing of the sort; it’s rhythmically challenging, to be sure, and his playing often seems untethered to convention (or to what the rest of the band is doing). But like any brilliant soloist, he went where the muse took him. Today his most well-known numbers (“’Round Midnight,” to name the most famous) are long-standing classics, standards of jazz.

In 1958 Monk’s quartet did a lengthy engagement at one of New York City’s stellar jazz venues, The Five Spot Cafe. And – and under the direction of producer Orrin Keepnews — Riverside, his record label of the time, recorded a couple of the shows. One of these was released as Misterioso. With typically clear and balanced you-are-there production, Keepnews captured the band for Misterioso running through a half dozen tracks, ranging from blues improvs (“Blues Five Spot,” presumably named after it was performed) to a solo piano number (a brief run-through of “Just a Gigolo” with an arrangement that won’t be especially familiar to fans of Louis Prima (or David Lee Roth, if you must).

Though credited to The Thelonious Monk Quartet, this night it’s mostly Johnny Griffin‘s show. Several times during the proceedings, but most notably on “Nutty,” the saxophonist drops well-known licks from popular show tunes into the middle of his high-flying solos (“The Surrey With the Fringe on Top” from Oklahoma! is the most readily recognizable of these, but there are several). At Griffin’s enthusiastic command (“I got it! I got it!”) the band drops out to allow him a long unaccompanied sax solo on “Let’s Cool One.” One can almost hear the audience’s collective jaw dropping open, and their rapturous applause begins even before the band rejoins Griffin.

The rhythm section of Ahmed Abdul-Malik (bass) and drummer Roy Haynes generally offers solid, understated support, but each of them takes his turn to shine in a solo spotlight within the structure of a long number (Haynes’ finest solo moment is during “In Walked Bud”). The established jazz approach – start off with the basic musical theme, expand and synthesize it, serve up some solos, bring it all back home – is adhered to on these numbers. Four of the six cuts on the original album run in excess of eight minutes, giving the arrangements plenty of breathing room. It’s something of a Monk trademark to land on two close notes (say, a Bb and a B) when the listener might expect but one, and that style is in full flower here. Again, what could have sounded like a mistake to a hapless tourist wandering into the Five Spot on a July night in 1958 sounds note-perfect to modern ears.

The title track is built upon a deceptively simple rocking (as in, back-and-forth, not rock’n’roll) melodic line, but that figure is merely the launching pad for a swaying bluesy number that – yet again – lets each member of the quartet blow. But as ever on Misterioso, Griffin gets the tastiest solos.

Concord’s Original Jazz Classics reissue series added nearly a half hour’s worth of music to the original release, and it’s that expanded edition which has been reissued again in 2012. The omission of the three cuts (“Evidence,” “’Round Midnight” and a medley of “Bye-Ya” and “Epistrophy” was clearly due only to the limitations of the LP format; these tracks are equal in ever way – sonically, performance-wise – to the original six numbers. Griffin playfully riffs on “Skip to My Lou” during “’Round Midnight.” On the medley, it’s Art Blakey sitting in on the drum kit.