Home  »  interview   »   Guest Blog: An Interview with Tom Gabel of Against Me!

Guest Blog: An Interview with Tom Gabel of Against Me!

In the interest of full disclosure, I should note that this is a feature written by my daughter Annelise Kopp, based on her 2007 interview with Tom Gabel. The feature originally appeared in the now-long-defunct Skope Magazine. With Gabel finding himself back in the news, I figured now was the time to pull this one from the archives over at musoscribe.com — bk 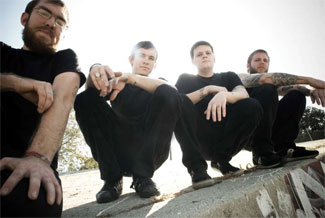 Inspiration for Tom Gabel is “kind of a magical thing.” The guitarist, songwriter, and lead vocalist of Against Me! says that “It just comes when it comes, and it’s not there when it’s not there.” Creativity is one thing, but forced inspiration isn’t inspiration at all. Gabel uses a new songwriting approach each time, and claims that “there’s no science to it.” He goes on to say that the order in which the songs are written varies. Sometimes it’s music first, lyrics second; other times the reverse.When Tom Gabel started playing solo, his music had a folk-punk sound. While this sound resonates in the Gainesville FL-based group music even today, the band has certainly taken more of a rock approach. Why do people love this band? It probably has something to do with the “oomph” and power of the music, the catchy melodies, and the compelling lyrics.

On past albums, they have had one or two slower songs to offset the discs’ pervading breakneck pace. Songs like “Baby, I’m an Anarchist,” “Joy,” and “Cavalier Eternal” give even this high-energy band an opportunity to be recognized as folk-punk. The song “Pints of Guinness Make You Strong” blends these elements with more of a rock sound that calls to mind the work of Flogging Molly.

Tom Gabel admires any musician that “just keeps going.” He says that he finds work ethic to be one of the most admirable traits in a musician.

Although I asked no questions about Gabel’s thoughts on pirated music, many of the song names from this band’s albums are too long to ever want to write out on the back of your own CD case. For example, there’s “Unsubstantiated Rumors Are Good Enough For Me (To Base My Life Upon).”

In 2006, the band was involved in a Replacements tribute album. Gabel says the Replacements are one of his all-time favorite bands. Under the name Against Me!, the guys have only covered two songs. Other than on this tribute, they cover “Money Changes Everything” by The Brains (popularized by Cyndi Lauper). With these interesting choices, it’s indisputable that Gabel has eclectic taste in music. He claims to like everything but new country. He’ll listen to anything from Nelly Furtado to Nirvana, but says “I hate new country. [It’s] horrible.”

Against Me! has changed record labels a few times in the past, but recently made the switch to Sire Records. Some fans were discouraged, fearing a change to a major record label was a musical sacrilege, an abandonment of what Against Me! is really about. Gabel counters, saying that he believes the record label will not push for a more commercial product. “I think that Sire knew what kind of band they were getting when they signed us.” This is good news for the fans that already love their sound.

As a lyricist, Gabel is drawn to the words in songs just as much, if not more, than the melody. “If it’s not got good lyrics [but] it is good music, I’m not going to listen to it. But if it has great lyrics and so-so music, I’ll still probably listen to it,” he says. “There are only so many chords out there. Every musician is just recycling the same chord progression. I think the lyrics are a really important part of it.”

Against Me!’s new studio album, New Wave, is produced by Butch Vig. In the past, Vig produced albums by Sonic Youth and Nirvana, and even remixed a Beck song. What is New Wave like? “It’s rock and roll,” says Gabel. “I really wanted–with this new record–to do something that energized you when you listened to it.” Often what captivates listeners is the initial punch of this music. Once pulled in, you can appreciate the lyrics of the songs.

Because of the band’s provocative and political lyrics, inquiring about Gabel’s thought’s on November [2007]’s poll results was essential. He quotes The Who to say that with the continuous switching between Democrats and Republicans, each new election is a case of “meet the new boss, same as the old boss.”

It is the fast-paced and raw powerful sound of the music paired with insightful lyrics that give Against Me! Their signature sound. That is the party we came for.