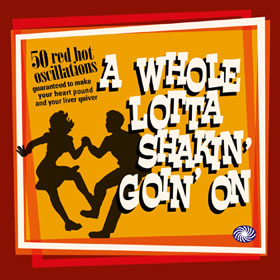 Beginning in the 1990s, a mixtape was a collection of music designed as a background for a rapper. Said rapper would collect his or her favorite beats, and then do their thing live over the sounds of the boombox. Essentially, it was rap karaoke without the TelePrompTer (and usually without music by Journey).

Of course back when I was growing up, a mixtape was a mixtape. Making and giving one was a tidy way of letting someone know you had a crush on them. (Yeah, I made a few.) You took the time to carefully compile just the right songs – often with a thematic thread – and you presented the results in hope of some sort of positive notice. In 2012 the same goals can (if one is lucky and/or deserving) be achieved by the sharing of a Spotify playlist. Remember that tip.

Over the last few years, UK-based label Fantastic Voyage has established itself as a master of the thematic compilation. The list of excellent comps from the label is long, and I’ve covered more than dozen of them here. One of the latest leans more than usual in the direction of the venerable mixtape, and its title telegraphs the punch: A Whole Lotta Shakin’ Goin’ On. If that doesn’t tell you nearly everything you need to know, the subtitle fills in most of the remaining blanks: “50 Red Hot Oscillations Guaranteed to Make Your Heart Pound and You Liver Quiver.”

Yep, it’s a collection of early rock, blues, r&b (and a tiny bit of country) all brought together under the thematic rubric of…shakin‘. And it’s done so in the most literal manner imaginable, featuring titles like “Shake it Lucy Baby” (Johnny Otis), “(Make With) the Shake” (The Mark IV), “Knees Shakin’” (Frank Starr) and “Shake for Me” (Howlin’ Wolf). You get the idea. In fact, of the fifty tracks across two CDs, every damn song has a variant of the verb shake in its title (shake, shakin’, shaky, shook, etc.). Grammaticists note: only Amos Milburn‘s “Ain’t Nothing Shaking” includes the letter g at the end of the word (but the “ain’t” nicely balances things out, don’t you think?)

But even beyond the hopeless gimmicky approach of the set, this is a collection of fine music. Clearly designed for dancing (or, I should say, dancin’), these sides do a splendid job of capturing the zeitgeist of an era when music was the soundtrack to wild partying and setting one’s spirit free. (Or, a prelude to getting laid. Or both.) The names on the set are a who’s-who of important and influential artists of the day; in addition to the recognizable names above, listeners will find tracks by the famous and legendary (Jerry Lee Lewis, Bill Haley and His Comets, Elvis Presley, Conway Twitty, The Coasters) alongside lesser known but equally well-represented names such as Little Willie John, King Curtis and Dorsey Burnette.

As is typical of Fantastic Voyage compilations, excellent liner notes (here by Stuart Colman) provide discographical information and a bit of useful historical contextualization, all of which only makes the set better. So next time you’re havin’ a party, consider spinnin’ A Whole Lotta Shakin’ Goin’ On. Now…get shakin’.