Jump Out the Window: The Brotherhood Story (part 9)

Don’t Let Go As to why Brotherhood folded, Phil says, “The short answer is that we didn’t have any hits. We flopped. There was no demand to hear Brotherhood, either in concert or on the radio.” While still best friends, throughout the band’s time Drake and Phil continued to be at odds as to the band’s direction. “They were twins, and loved the music, and they were best friends,” says Drake’s widow, Sandra. “But they were very opposite, too.” While the legal wrangling and battles with RCA had taken their toll, Lynnette Stevens points to those “problems between Drake and Phil” as the main cause of Brotherhood’s demise. She notes that “Drake loved Phil,” but that the two “argued constantly.” 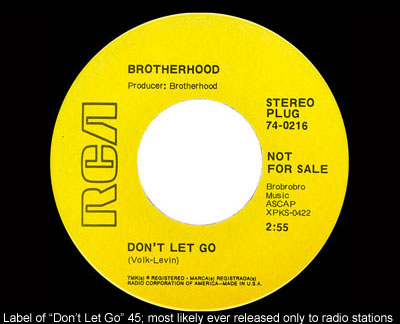 It’s been suggested that RCA was pushing the band to tour. Drake was willing, but Lynnette says, “My recollection is that Phil did not want to go on tour.” Offering his perspective on the band’s structural problems, Ron Collins adds, “The reality is the Brotherhood, as far as I’m concerned, never really got off the ground as a band.” He continues, “It’s true that we did do a short tour back east, but that was the extent of our playing together as a band.” Buddha insists that “if Drake had gotten his way, they would have piled into a van and ‘Paul Revere’d’ around the country.” Jeff Levin sums up the reason the band ended in three words: “lack of funds.” The band never – then or now — saw a penny of royalties from any of the songs they recorded. “Drake and I were flat broke; I had to sell my house and move into a rental property,” Phil says. 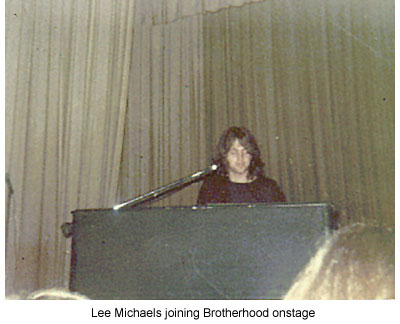 The individual members were going in different directions in their personal lives as well; Phil had become a Jehovah’s Witness. Joe recalls that “Phil would come into the studio and try to convert Drake and me. I’d say, ‘Sorry, that’s not what we’re here for.’” It’s worth pointing out that although Phil was experiencing a spiritual awakening — inspired and encouraged in large part by his friend and former manager Roger Hart — the lyrics he was penning for Brotherhood songs were not preachy, religious tracts. The sentiments espoused in Phil’s songs of the period put forth positive, uplifting and universal themes with which few would argue. In any event, whatever the specific reasons, Brotherhood was over. 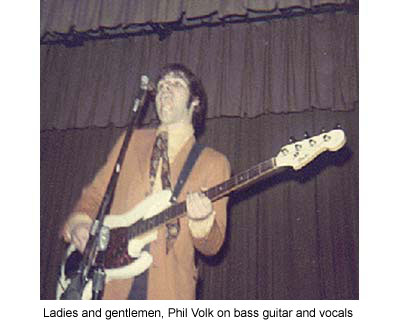 Phil believes that Joe Pollard “got fed up with me and Drake having our skirmishes, just like Smitty had.” But Joe says, “I heard about the arguing, but I never saw it. That never came out in front of me. They’d have little artistic skirmishes, but never anything that would shut the session down.” His reason for leaving was simple: “no, gigs, no money.” After trying to make a go with Drake backing Gene Redding on some live dates, the drummer took a touring gig with the Beach Boys. An in-demand musician, he toured with the Grass Roots, played in a Las Vegas show band, and lent his stick work to many other projects, both onstage and in the studio. He had a major role in development of some experimental tuned drums in the 70s, and in 1976 Joe unveiled the Pollard Syndrum, the first electronic drum. Today he owns a business and lives in California. 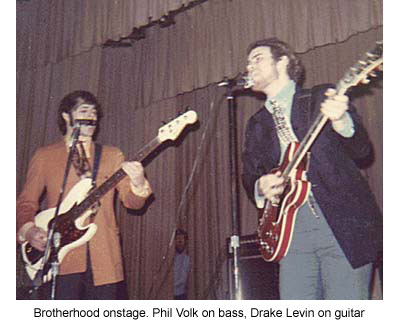 “At some point in 1969 I got a call from Don Nelson,” Phil recalls. The band’s former manager told him about an available gig with nephew Rick Nelson, with the Stone Canyon Band. Phil replaced Randy Meisner, joining Rick on tour and remaining with him for several months. Over the years he has continued to work with former bandmates and associates. During downtime from Nelson’s tour, Phil played on some live dates featuring an expanded-with-horns Raiders lineup. Engineer Eirik Wangberg again worked the boards for some sessions by Phil’s group The Great Crowd. Friendship Train, Phil’s early 70s Disneyland group with wife Tina, also featured Joe Pollard on drums. After a number of other musical projects – including a Revere-less Raiders reunion in 1997 – Phil teamed up with Drake (plus ex-Raider Keith Allison, The Grass Roots’ Joel Larson and others) in the American Rock All-stars. In 2000 Phil sat in with The Loons (featuring Ugly Things’ own Mike Stax) at a Grind Festival gig. Living in Las Vegas, he remains musically active today, having released a rocking remake of Bob Dylan’s “The Times They Are a-Changin’” in May 2011. 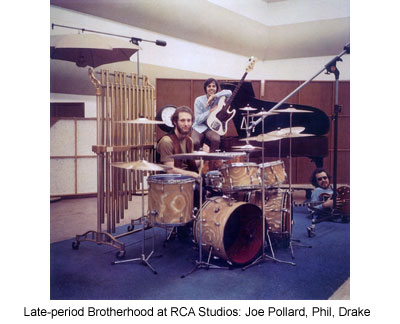