Jump Out the Window: The Brotherhood Story (part 8)

A Brotherhood reading of The Mamas & the Papas’ “California Dreamin’” is one of three covers on the record. A super-heavy reading of the song, the arrangement owes much to Vanilla Fudge, and Drake plays a blistering, Hendrix-styled solo. Phil and Joe recall cutting the song live in the studio; it took twenty-plus takes, with Phil playing bass and singing out in the foyer while Drake and Joe played at maximum volume inside Studio C. Drake’s Leslie’d guitar on the verses is an early example of the effect popularized by George Harrison on Let It Be. 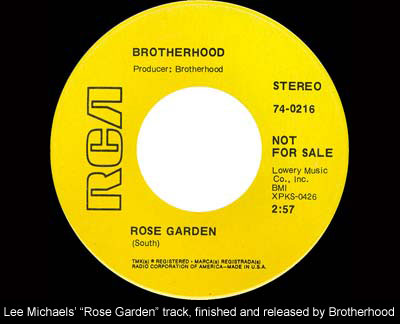 “Rose Garden” is another borrowed tune, albeit one with an unusual history. First cut in 1968 by songwriter Joe South, a version of the song would be a monster hit in 1970 for Lynn Anderson. But this ‘69 backing track was originally recorded by a friend of the band, organist Lee Michaels. The track was possibly intended for his Recital LP; Drake played on all of that album’s songs. A&M label head Herb Alpert had insisted Michaels record the song, “but Lee hated it,” says Phil. “He knew we were under pressure to get this record done, and we were running on empty, suffering from writers’ block.” So Lee slipped Brotherhood his track, probably without approval from his label: “No one questioned how the master tape got from Point A to Point B,” Phil chuckles. He remembers the lineup on the rocking recording – cut at A&M — as Lee Michaels on organ, ex-Turtle Johnny Barbata on drums, Chris Etheridge on bass, Drake on guitar, and Phil’s overdubbed lead vocal. Joe has memories of working on the song at RCA as well, but it may be those were rehearsal sessions for one of the group’s few live gigs. 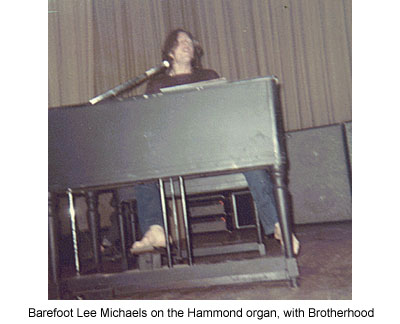 “Deep Blue Sea” is an early example of a direction Drake would explore in later years. The song has a San Francisco bluesy vibe similar to the Grateful Dead’s sound at the time. (Coincidentally, Joe’s drum roadie during this period was Mickey Hart.) Phil characterizes the song as “filler, an album track. It didn’t really match what we were all about. But we were desperate.”

Another tune banged out quickly, “Family Tree” has a petulant, Stonesy lyric about “a girl with too much money,” Phil says. He recalls suspending the vocal mic in a trash can to get the singular sonic effect on this snarling garage raver. 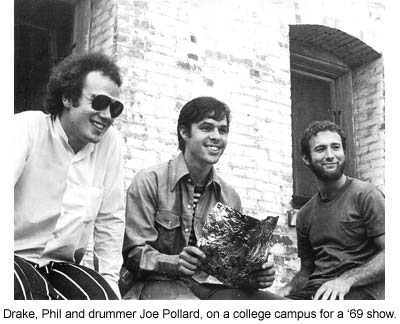 To fill another three-and-a-half minutes, the band recycled Joyride’s “Love Sketch,” adding an overdubbed Drake Levin vocal in which he sings a sentimental (if slight) lyric: “Love me, I love you / Love you, yes I do,” etc. The band thought of the melancholy ballad as a companion to the first album’s “Forever.”

An alternating unison/harmony vocal arrangement is the highlight of the straightforward pop-rock “Destination Unknown.” The song’s lyrics may have been a subtle telegraphing of Drake and Phil’s realization that the band’s future was uncertain. 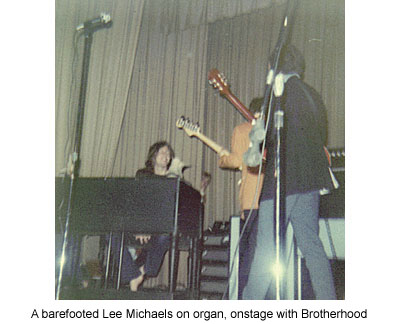 The record closes with a Beatles cover, “When I Get Home.” Though using much the same power trio approach as on “California Dreamin’” the band did do some overdubs. “Drake had that Hendrix sound down pat” on the track, Phil observes. Had the band persisted, Phil believes this style might have pointed the way toward their future.

Working with high-contrast, black-and-white band photos, Drake and Phil created the collage that adorned the album’s front cover. Joe Pollard had suggested titling the straight-ahead, rocking album Brotherhood Too, but the record was released in late 1969 with Drake’s choice of title: Brotherhood Brotherhood. The LP met the same commercial death as its predecessors. “We had high hopes,” says Joe. “When we finished the album, we were ready to go on the road.” There were a few live dates, including Palm Springs and Spokane. “The few places we played, everybody loved us,” Joe says. 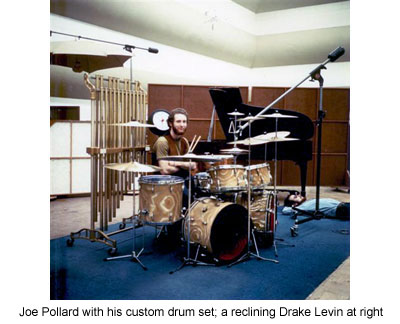 The band didn’t go out of their way to let the public know that Smitty was gone. Though speaking in a different context, Joe inadvertently provides a plausible explanation for his name not appearing anywhere on the Brotherhood Brotherhood sleeve: He says that in the 1960s, “When a band member left a group, that could be the kiss of death” in the marketplace.

A promotional single of “Don’t Let Go” (with a minute and a half shaved off) b/w “Rose Garden” was pressed and released in August, but was distributed only to radio stations (few of whom played it). Once again, RCA Victor’s marketing efforts focused on a Jefferson Airplane LP, in this case the Volunteers album released in November. With their contract played out and no new offers or opportunities on the horizon, the band quietly broke up.