Jump Out the Window: The Brotherhood Story (part 4)

The band kept changing their minds about which song to release as a single. In the end they chose “Jump Out the Window” b/w the Sopwith Camel-ish “Box Guitar.” The A-side “was a nice little groove” and featured early use of Moog modular synthesizer, but Phil was concerned the song’s lyric might lead suggestible listeners toward self-destruction. “I thought it was irresponsible,” he says. “We had a three-day argument about it.” A story cloaked in the mists of urban mythology, Art Linkletter’s daughter Diane did die after a jump (or fall) out of a window in October 1969, but there is no evidence she ever heard Brotherhood’s single. In fact, in 1968-69, very few people actually did. At a distance of forty-plus years, and viewed from a certain angle, the lyrics to “Jump Out the Window” sound more like a subtle message of liberation for a trio of ex-Raiders. 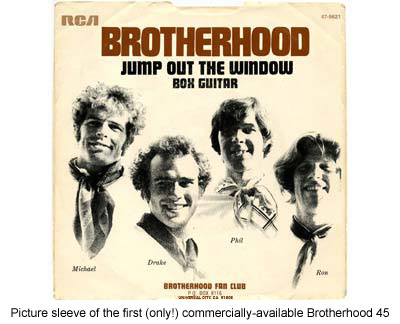 To Phil’s ears, the soft-shoe foxtrot of “Box Guitar” sounds “just like the Mills Brothers.” The track features tack piano from Ron Collins, and Phil’s brush percussion onto the back of an acoustic guitar. “If you want to know what the Brotherhood stood for,” Phil offers, “it’s encapsulated in the lyrics of ‘Box Guitar.’” Part of the lyrics read, “And when your days are over, what’dya think you’ll do? What will you be down or up to when your days are through?”

“Forever” (also known as “I Believe in Forever”) closes the album on a dreamy, minimalist note. Sweeping strings accentuate Drake’s vocal about timeless love. The distinctive drum sound was achieved by recording Smitty’s track with the tape running fast using a variable speed oscillator, and then slowing the tape back down before adding the other instruments. Phil praises Eirik Wangberg’s engineering talent on this track in particular, and also recalls Ron playing a strange device on the track, a machine that Robert Moog had brought in for them to try. Wangberg recalls that Sound Recorders “was considered the most modern equipped studio in Hollywood,” and says they were one of “the first, synthesizer-wise.” Phil laughs as he recalls Ron’s matter-of-fact comment on Moog’s synthesizer: “I think it has potential.” 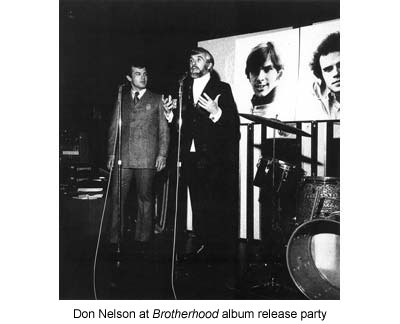 The twelve tracks on Brotherhood — all originals – are credited to Smith/Volk/Levin; though organist Collins is clearly a part of the arrangements, he receives no compositional credits on the disc. Phil insists Ron was an important part of the group. “He was closer to Drake than to the rest of us,” Phil notes.

“There’s a picture of the four of us on the back of the first record,” Phil says. “Me, Drake, Smitty and Ron Collins. I’m in the middle with a baseball cap on. But that’s not my hat, and those aren’t my hands.” He explains that in the original photo, “There was a guy who was trying to choke Drake and Smitty in some late-night diner in Birmingham, Alabama. Ron couldn’t stop laughing. This guy — who was slightly drunk and a lot bigger than them — had Smitty and Drake in this neck grip.” In hope of defusing the situation, Don Nelson asked Ron to pose with all of them for a picture. “Later on,” Phil laughs, “Don liked the picture so much that he took the big guy’s face out, put mine in, and used it on the album!” The end photo result is a very large “Phil,” with black hands. He says, “It looks like we all love each other. But that was actually a dangerous moment.” 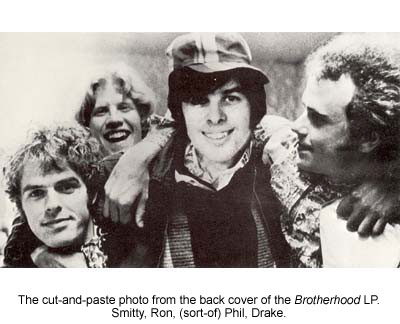 If RCA did much in the way of promotion for Brotherhood, little evidence of it – beyond a printed mailing piece — exists today. “I don’t remember one billboard, one magazine ad, one bit of radio promo work. It was like they were gonna let us do one more album, then write us off. That was it.” In 1968 most of RCA’s promotion went toward Jefferson Airplane; their Crown of Creation LP was released in September. 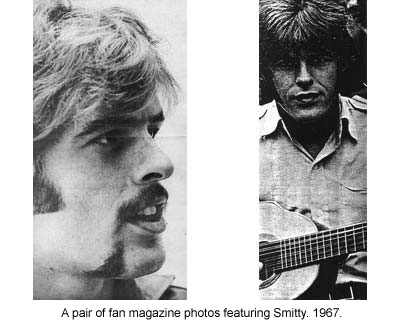 Phil recalls that the band did a lot of self-promotion. In August of that year, Teen Beat made brief mention of “a press party at Arthur’s in Beverly Hills” and some subsequent live dates. A November 22, 1968, issue of a Seattle newspaper mentions an All City Teen Dance to be held Wednesday, November 27, at Exhibition Hall at Seattle Center. On the bill were City Zu, the Liverpool Five and “Brotherhood, a new group consisting of three ex-Raiders.” The band also played a Rose Bowl concert with Eric Burdon and the Animals as closers, but Phil laughs that “there were only about four hundred people there! In the Rose Bowl!” He notes that most of the Brotherhood gigs were “unmemorable.” While the shows concentrated on material from the album, Phil says that they also threw in “some Raider nuggets, so people would remember who we were.” He mentions the hits “Just Like Me,” “Hungry,” “Steppin’ Out” and “Kicks,” as well as spotlight numbers “Baby Please Don’t Go” and “Get it On.” 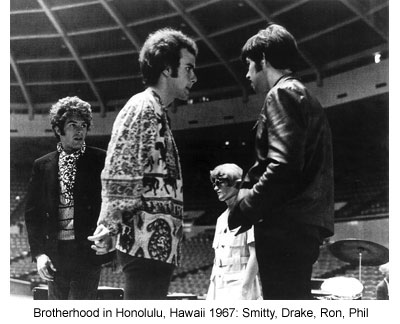