In the 1970s, when direct-dialing for international telephone calls became widespread, the practice was largely cost-prohibitive. Even though in those days music journalists sometimes actually got paid(!) for writing stories, rarely was the pay enough to make overseas interviews via phone a practical option.

These days there’s Skype, and a call originating via Skype to a land-line in Germany costs a mere 2.3¢ per minute, thus putting a transatlantic phone interview within the financial reach of even the lowliest music blogger. Call quality, however, remains a wildcard, being affected as it is by a wide array of factors. 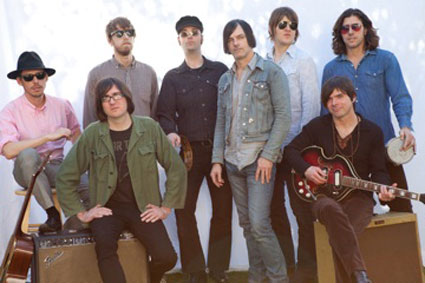 My recent phone conversation with the curator of a German-based jazz label went off without a hitch; the audio quality of our nearly hour-long call was comparable to a call between cell phones across town. That was a best-case scenario.

A worst-case situation existed in my conversation a few days ago with Anton Newcombe, leader of Brian Jonestown Massacre. In Germany and preparing for a tour, Newcombe was on a very tight schedule, but graciously worked a brief conversation with me into his timetable. But the audio quality during our conversation frequently reached awful depths. To make matters more frustrating, Newcombe was exceedingly generous, candid and voluble in his replies. Sadly – and despite his patient repeating of his answers on request – large chunks of his comments remained wholly unintelligible.

That’s the bad news. The good new is much more plentiful: the latest BJM release (Aufheben, out May 1 on A Records) is another inviting and warmly-textured release from the group, and – call quality be damned – Anton Newcombe had some fascinating perspectives to share about it, his approach to songwriting, and music in general. 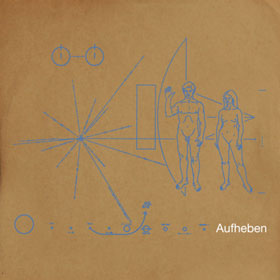 Though we didn’t discuss it at all during our phoner, a few words here about Ondi Timoner‘s 2004 film Dig! are in order. That film purports to be a documentary look at the rivalry between two bands: Newcombe’s BJM and the Courtney Taylor-Taylor-led Dandy Warhols. The film portrays Newcombe as, to put it bluntly, a mess: sort of a pre-rehab Robert Downey Jr. of the indie music world. The Dandys, by contrast, are shown to be relatively grounded, well adjusted folk.

The film was attacked from many quarters for its selective-editing approach, and for its fast-and-loose dealing with little things like facts, sequence of events, and who-really-got-arrested. But all that aside, even if one willingly accepts Timoner’s version of reality, one thing remains clear: The Dandy Warhols make good music, but Newcombe is the real talent here.

There’s an old saw about Eric Clapton‘s music having got a lot less interesting once he got clean. By evidence and available accounts, Anton Newcombe – now married and settled in Berlin – has his act much more together these days. And his music – always compelling since BJM’s 1993 debut – has never been more interesting than on Aufheben.

As with 2010’s Who Killed Sgt. Pepper?, on many tracks on Aufheben, Brian Jonestown Massacre’s approach de-emphasizes the vocals. Newcombe’s production often treats the human voice as one of many instruments – a textural device – more than a lyrics-delivery device. “There are several things in play here,” Newcombe explains. “I continue to write in foreign languages.” And he approaches songwriting with what he calls a “’60s classic pop sensibility instead of trying to articulate everything” via lyrics. He points out that when other (non-English-speaking) artists translate their lyrics to English, they end up not really knowing – and certainly not feeling – the words they’re singing.

Newcombe’s approach is more impressionistic. He compares his approach to that used in opera, saying that he sometimes “use[s] syllables as notes.” His approach is less about leading the listener by the nose (or ear, as it were) to a particular set of thoughts and feelings via a well-defined set of lyrics. It’s more about setting the stage for a certain ambience, freeing the listener to embark on his or own trip (my word, not his). “Ill just make something up and start singing the sound,” he says. “And if I get caught up in that – if it’s good enough – I’ll keep going. That’s my modus operandi.” 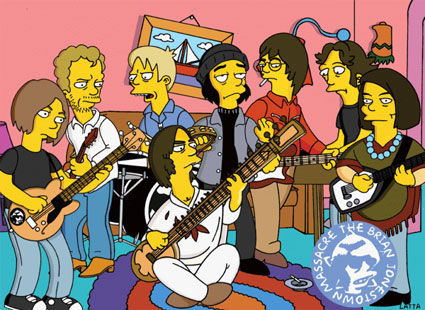 Though it makes ample use of modern styles – shoegaze, drone, electronics – Aufheben is at its core a very organic-sounding record. The BJM bag of sonic tricks has long drawn upon instruments outside the guitar-bass-drum lineup, and often includes flutes, Mellotron, sitar, tablas and other exotic instrumentation. But despite the “real” texture of those sounds on the new album, most (but not all) of what listeners will hear is in fact sample-based. While Newcombe has “a real Mellotron,” using samples from it eliminates the very real need to have a technician on hand to tweak the notoriously finicky and unreliable instrument. Newcombe reminds me that “everybody – everybody – is using digital now.” So while BJM’s sound is often rooted in the past, there’s no slavish devotion to a reliance on period instruments when modern samples will achieve the same end result. Newcombe does insist on staying away from what he describes as “Nord Lead out-of-the-box” sounds,” preferring instead to make his own sounds, sampled or not.

Though Brian Jonestown Massacre draws from classic influences, they never sound like a carbon copy of other bands (and, unless they mean to, they don’t come off as a pastiche either). That said, the vibraphone (or vibraphone samples) and spaghetti western textures woven throughout Aufheben respectively bring to mind Martin Denny and Ennio Morricone. Newcombe readily agrees. “Morricone is a hero. At this point in my life, I would really love doing [film soundtrack work]. But Hollywood’s not in the movie business, they’re in the billions-of-dollars business.” That’s his own explanation for why arguably modest talents get a lot of soundtrack work while more worthy but lesser-known names (no names are mentioned, of course) don’t get the call.

Like most recording artists, Newcombe admits that if an opportunity for song placement in a film arises, “I’ll take the money,” but he’s not a fan of that kind of soundtrack creation. He characterizes the use of old songs in new movies as “a treasonable offense,” one that “shows a total lack of imagination.” He prefers purpose-built soundtracks. Give the chance, Newcombe would like to someday use his talents to “make a great movie even better.” He pauses and self-effacingly adds, “If that’s possible.”

“But I don’t see that happening [for me] in America. There’s too many talented musicians; I’m way down on the list.” He reflects for a moment: “I don’t see any reason in the world why Trent Reznor should be pulling two Grammy Awards for soundtracks. Because it’s a big world out there. I’m aware of his skill level and where his strong points are.” He leaves the matter at that.

Newcombe employs an unorthodox (and somewhat oblique) metaphor to describe his approach to writing music. “Imagine a box of Lego block toys. And you’re in a band that’s influenced by The Beatles. So you’ve spent some time with the Beatles ‘kit.’ You’ve built your own little John, Paul George and Ringo, and the Ed Sullivan Show set. Well,” he says, “that’s what I did when I was ten. And I still have all those blocks.” But these days he puts them together in different ways, creating different forms. For Brian Jonestown Massacre albums, Newcombe says, “My goal is to end up with a collection of songs – of recordings – that represent a full spectrum of human emotion.” Again he pauses and adds, “If I can.”

“I sit there like [I’m in] a boat,” Newcombe continues. “And I wait. Sometimes there’s no wind.” Patience pays off, he believes. “A young, inexperienced sailor sees that there’s no wind, and he’s tempted to start rowing,” he says. “The older sailor,” he chuckles, “says, ‘I know that if I sit here long enough, the wind’s gonna come.’”

Brian Jonestown Massacre is on tour late April and May 2012 in the USA, followed by tours in Australia and Europe. They’ll return for an east coast USA swing in August. More details at www.brianjonestownmassacre.com.