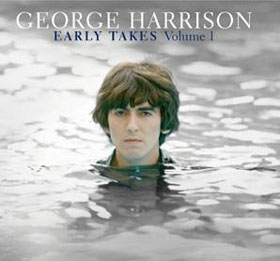 When The Beatles rolled out their Anthology CD sets – six discs worth of previously-unreleased music in 1995 and 1996 – hardcore Beatles fans found that the albums continued a number of tracks they already knew. George Harrison‘s early acoustic run-through of “While My Guitar Gently Weeps” had circulated among tape traders since the early 1980s. A number of tracks had leaked out when EMI created test pressings of a 1985 proto-Anthology called Sessions. Further material leaked from John Barrett‘s archival research into the Abbey Road vaults.

Barrett’s research in particular led to discovery of some solo material from George Harrison. Most prized among collectors were two collections in particular. Beware of ABKCO was a release-quality tape of Harrison in the studio, demoing (for Phil Spector) many of the songs destined for his debut-proper (but actually third solo album), All Things Must Pass. These solo versions – some voice and acoustic, some with electric guitar – have a homespun beauty and simplicity that the finished versions (with their sweeping Spectorian production) sometimes hide a bit.

Much of the remaining significant material was collected on unofficial packages with titles like the 3CD set The Making of All Things Must Pass and the double CD All Things Must Surface. These and the Beware of ABKCO collection showed Harrison as a careful composer and arranger; with his pent-up backlog of excellent material, at that stage he had more good ideas than could fit on an album. (Of course that raises the question: why not release good songs like “Down to the River,” “Dhera Dun” and “I Live for You” instead of aimless jams like “Thanks for the Pepperoni?” I have no good answer for that one.)

But even hardcore Beatles and Harrison fans with massive bootleg collections will find a number of previously unheard gems on the new (and official release) Early Takes Volume 1.

Most of the songs on the new set are from the All Things Must Pass era. It may well be that future releases (this one is labeled Volume One, after all) continue in something of a chronological order. It’s certainly true that Harrison’s early 70s output ranks among his most loved (read” most commercially viable).

The full-band demo of “Awaiting on You All” is very similar in structure to the official version, but it features one guitar instead of dozens, one voice instead of what Harrison waggishly dubbed “The George O’Hara-Smith Singers.” On the other hand, “Behind That Locked Door” is very similar to the finished version, right down to its signature pedal steel guitar work. The version of “All Things Must Pass” on Early Takes has more in common with the Anthology 3 Beatles version than the finsihed track.

A pass at Bob Dylan‘s “Momma You’ve Been On My Mind” is enjoyable, but the off-the-cuff Let it Be-era solo version that has circulated among collectors is, in the end, a more fascinating listen. “Woman Don’t You Cry for Me” would end up on Harrison’s 33 1/3 album I n1976; the spare version here may well have been recorded five or six years earlier.

Surprisingly, what the arrangements on many of Early Takes Volume 1 are most reminiscent of is John Lennon‘s 1970 Plastic Ono Band album: simple drum and bass parts, rendered with dry, clear and direct production. On (slightly) later tracks like “The Light That Has Lighted the World,” one of the better tracks on 1973’s Living in the Material World, listeners get the treat of hearing George with only his acoustic guitar, and only the tiniest bit of vocal harmony overdub at the end.

The album does indeed fly by. Some have taken issue with the album’s brevity; at under a half hour, the argument goes, why not fill the CD to its limit? One rejoinder to that might be this: Consider Meet the Beatles (or Please Please Me, if you prefer). Nobody asks why those records aren’t longer. It’s about quality, not quantity. More pertinent here is that the CD of Early Takes Vol. 1 was initially intended only as part of a package that included Martin Scorsese‘s Living in the Material World documentary DVD; stand-alone release seems to have been an afterthought.

In short, Early Takes Volume 1 is indeed short; some fans will already have a few of the tracks; and it seems to have been compiled more as a companion to a film than programatically as an album. But it’s still about a half hour of previously unreleased George Harrison music, and for that reason alone it remains essential.