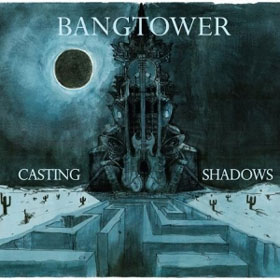 Building on accessible melodic ideas, the trio embellishes these with memorable riffs, a wide sonic palette and dazzling displays of chops. Fans of Steve Vai will appreciate the funkified “Sex Me Up,” with its almost-swinging underpinning, over which Citron applies all manner of guitar embellishments: 70s style dual-guitar runs, pig-squeal leads, stomping/crunching power chording, and harmonic interplay with Jones’ bass (itself, often a lead instrument in the Jack Bruce tradition).

Speaking of Jack Bruce, there are some very Cream-y vocal aahhs on “Sex Me Up,” and that – using voices as instruments – is a nice touch for what is really an instrumental album. When Jones takes the solo – -and he does so frequently – his bandmates provide sympathetic support; the result is never indulgent in a Spinal Tap “Jazz Odyssey” fashion.

There’s no telling just how many guitars (or basses) appear on a given track. On “Hair of the Dog,” for example, it’s tough to tell if one of the instruments is Jones doing some high-neck chording on his bass, or if it’s one of several Citron guitar parts. There are keyboards on Casting Shadows – by both Jones and Citron – but their use is subtle, providing a bed for the string workouts.

Vague hints of Steely Dan‘s work crop up on the disc; perhaps it’s the jazz sensibility applied to rock songs that warrants the comparison. Bangtower is certainly far more hard-hitting, though. And the polyrhythms of “Let ’em Drown” would be out of place on a Steely Dan record. Citron’s snaky, harmonic lead runs will bring a smile to anyone who enjoys Joe Satriani‘s excursions into similar territory.

Casting Shadows frequently finds Bangtower putting a spin on arrangements. Even a subtly romantic melody like “Ballad of Wealth” has stacked guitar solos (reminiscent in places of Queen‘s Brian May) that give the song a harder edge. And Jones’ throbbing fretless bass adds a jazzy texture. “Man in the Middle” is built on an underwater-sounding bass line and some chilly keyboard pads; Citron leans heavily on his whammy bar during his solos, and the interplay between heavily treated (insect-sounding) instruments would be fascinating just for the tones used, let alone the tasty notes being played.

On “1%ers” Citron coaxes some very electric-sitar-ish tones from his axe, but this is no world music excursion. Perhaps the busiest track on a busy album, the track shifts seamlessly between noisy and quiet, between skittery and smooth. Garces’ clattering drums suggest a strong Bill Bruford influence. The track sums up all of the virtues of Casting Shadows in a brief five minutes.

Recommended for fans of jazz-influenced progressive rock with a metallic edge.