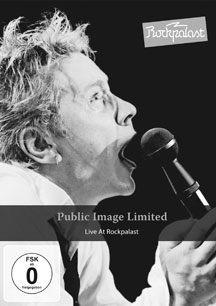 Time really does change things. It was Halloween night 1983 when Public Image Ltd. took the stage at WDR’s television studios for a concert. But now, shy of three decades later, somehow John Lydon‘s atonal warbling has transformed into something almost – dare I say it – musical. Really: his vocals have a musicality all their own. Witness the performance on the new DVD Live at Rockpalast 1983.

The band on this night features longtime Lydon associate Martin Atkins on drums (I met him a few years back; really nice gent) and Tommy Zvoncheck* on – perhaps surprisingly – a stack of nearly a half-dozen keyboards. (Right around this same period, Zvoncheck provided similar auxiliary help to Steve Wynn‘s band The Dream Syndicate.) With a Yamaha CP70 electric piano and several Sequential Circuits synths onstage, PiL’s setup in 1983 might have looked fairly standard for the time, but the music created was anything but ordinary.

Anchored by Atkins’ ferocious, insistent drumming and the loudly-mixed, dub-influenced bass guitar of a Sting-mulleted Louis Bernardi, on this night PiL rocks pretty hard. From the moment that Lydon walks onstage with his cat-got-the-canary smirk, it’s clear that he’s there at least in part to bait the audience. He succeeds, in part: several members of the mostly-male crowd (most of whom look like guys I knew in college) oblige and do a bit of the old slam-dancing. And when the crowd applauds wildly after numbers like “Annalisa,” Lydon politely shouts, “Shut up!” and then grins mischievously. Always the charmer.

Lydon and his associates pummel their way through a selection of tracks from First Issue, Second Edition (aka Metal Box) and The Flowers of Romance. And though Zvoncheck and guitarist Joseph Guida would be gone by the time PiL recorded This is What You Want…This is What You Get, on this night they preview “This is Not a Love Song” from the then-unreleased album. Perhaps running out of material, they finish their encore with a repeat of the opener, the uncharacteristically pop-toned “Public Image.” Lydon delivers the same dance moves for both runs through the song.

Barely four months earlier, this same lineup of PiL recorded the often poorly-regarded Live in Tokyo album; most reviews criticize Bernardi’s playing on that show in particular. Setting aside the relative merits of that release, Live at Rockpalast 1983 shows a band that’s tight, compelling and formidable. The new keyboard introduction appended to First Issue‘s “Religion” adds an ironic twist; the percussion-centric “Under the House” is hypnotic and relentless. And a cover (I guess you’d call it that) of Sex Pistols‘ “Anarchy in the U.K.” is given a relatively faithful reading. Taken as a whole, Live at Rockpalast 1983 is one PiL that’s relatively easy to swallow.

* For reasons unknown, the DVD packaging bills the keyboard player as one Arthur Stead; the DVD’s end-credits roll identifies him as Zvoncheck.