Treasures From the Vaults: The Jazzhaus Series, Part Two

Jazzhaus project curator Ulli Pfau has discovered – to his delight – that the SWR tape archive has been remarkably well preserved and cared for. However, the documentation of those tapes is less reliable. “I mistrust the archive documentation,” he says. “because it has been changed in five or six decades over and over again. It’s full of mistakes.” Pfau literally goes into the vault, to the shelf, and takes out each tape. “In some cases, I have found stuff which is not documented at all. And I am quite positive I will find more stuff.” 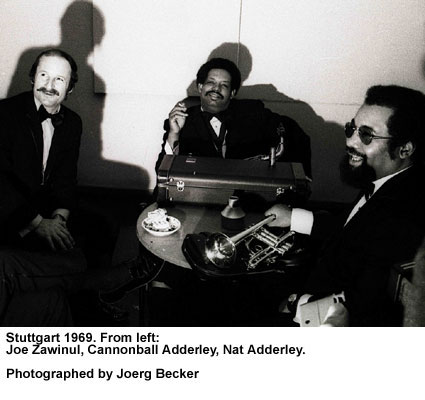 The archive is, then, full of surprises. “I found two Bud Powell solo performances recently,” Pfau reveals. “I cannot track down where they come from. I just listen to Bud Powell, and hear people applauding.” Some serious musical archaeology is called for. “I have to go back to the tour lists to determine at what time was Bud Powell in Germany, for example. When was he in Baden Baden, when was he in Stuttgart? And that way, I try to track down the concert. It’s very fascinating.”

Still, with so much material, how to decide what gets released when? “It’s more or less,” Pfau laughs, “my tastes that drives me to say, ‘This is worth it to release.’” Certainly, some of the SWR performances do circulate among jazz aficionados as bootlegs, but since they would be off-air recordings made on home equipment, their sonic quality is greatly inferior to the Jazzhaus releases taken from the master reels. “I have here an Art Pepper recording from 1981,” Pfau says, “and that was released later by his wife. I listened to that; the quality is poor. We would try to have a better sound, then, if we would release it.”

Our conversation turns to the Adderley release, Liederhalle Stuttgart March 20, 1969. I note that a treasured highlight of Cannonball’s live recordings is his propensity for between-song monologues. But on this set, the editing seems to delete a few of these, putting the emphasis on what remains. Pfau explains: “There’s one tune on the set – a Mavis Staples song called ‘Why Am I Treated So Bad’ – and Adderley gives a lengthy introduction. This, I thought, had to stay on the record. Because the way he is talking is like he is playing. It’s full of syncopation, and he’s talking along with the bass and the drums. It’s almost like he’s playing his saxophone.” Other spoken parts were left out owing to the sheer amount of music and the need to fit it all onto a single CD.

Jazz in general is – from a commercial standpoint – a niche market. And as much as Pfau and his associates love this music, the Jazzhaus project has to be financially feasible. “What works well for our interests is that the broadcaster (SWR) is comparable to a PBS station. It’s the same kind of system: a tax-funded institutional organization.” Pfau says that to his great surprise, “they have a very big interest that this old stuff is released. They know that they have interesting things in their archives, and it was their idea to say, ‘Why don’t we publish the old stuff which is in our vaults.’” SWR helps with archival research, photography, press reviews and the like. “They also took on the cost of mastering,” says Pfau, “so our up-front investment is not that big.” The result of this arrangement is that “the first three thousand pressings of each CD will not be a problem.” Every sale beyond the break-even point creates revenue that is put back into the project. Pfau reports that reaction has been overwhelmingly positive: the Adderley set has already sold out its initial run, and a second pressing is being put in place. “I’m very pleased at the response in the North American market so far,” Pfau says.

The label has plans for vinyl releases of some titles, and since SWR’s jazz archives include video, DVDs will be added to the release schedule in 2013. Meanwhile, the current titles are available via iTunes as well. “In North America, iTunes put the Cannonball Adderley set on their Top Five in the jazz department in the first week of release,” Pfau notes.

The Jazzhaus releases strive to include relevant information. Pfau says, “I think that jazz fans – I’m the same way – concentrate on the liner notes. The lineup, where it was recorded, who did the reissue, who did the remastering: these things are important. All jazz freaks are interested in these things which come complementary or parallel with the music.” The planned vinyl releases, Pfau says, will hopefully include old press reviews, facsimiles of the source tapes, and historical photographs when and where available. The extensive work put into each release sometimes involves contacting the artists themselves: “I called up [Adderley drummer] Roy McCurdy, who’s now a professor in Los Angeles,” Pfau recalls. “I spoke with him about his recollections of the concert.” It’s all part of a serious approach to the subject matter. “I want to do these releases in a careful manner, to honor the music,” Pfau stresses. “Sometimes, the music is so fantastic that I’m really anxious that we will rush, and not [take] the time that the music needs to be produced properly.” He’s determined not to let that happen.

As our conversation wraps up, Pfau runs down a list of some of the goodies yet to come on the new label. “I have a lovely Zoot Sims recording from 1958. And I found an unknown Chet Baker concert from 1981; the first trio recording with this lineup. I have nice big band stuff: Stan Kenton, Count Basie with Ella Fitzgerald. I have a couple of Coltrane concerts; I have to figure out which is the best one.” Pfau concedes that releasing all of these will take a long time. “I’m looking that the label gets a ‘face.’”

For more information on the Jazzhaus label and its releases, visit their website.