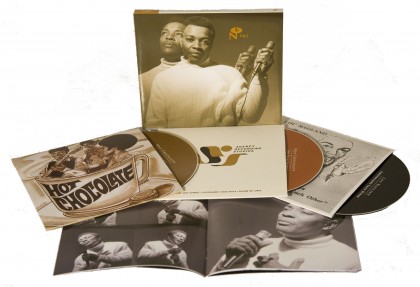 Way back when I was nineteen, I was a full-time college student, but I also held down a part-time job in retail. I became friendly with a co-worker name Wade White, and our conversations often centered around (you guessed it) music. Our backgrounds couldn’t have been more different: I was a suburban kid, and he was (if I recall correctly) a twice-divorced African American who had been part of a relatively successful funk/r&b group in the 1970s. He cut a striking figure: imagine a lanky Miles Davis with jheri curls. At first I didn’t know whether to believe his wild tales from the road; for all I knew, he was a spinner of fanciful stories. (Remember, I was a sheltered kid with extremely limited exposure to persons of color.) But Wade good-naturedly brought his passport to work one day and showed me all of the stamps; he had clearly traveled a lot, especially to the Caribbean. His band never quite made the big time, but they gigged heavily for several years, traveling extensively with their Parliament/Funkadelic-styled sound.

Long story short, he eventually asked me to join his current band as keyboardist. I had always had dreams of playing in a “real” band; the garage bands I had during my high school years usually played one gig and then fizzled out. I seized the opportunity. My experience – about a year or so – in this funk/soul/r&b cover band called Phoenix would be richly rewarding. I had nearly no previous experience with that sort of music, and it was fascinating to observe the different approach the players in the band brought to their instruments. They were all clearly expert – much more proficient than was I – but their style of playing was vastly different from what I heard on my rock albums at home. We played to enthusiastic audiences, and the fact that I was the only white person in the band (and the room, and sometimes the neighborhood) was more a novelty than anything else.

It was only years later that I began to appreciate just how fortunate I had been to have an experience like that. My bandmates exposed me to a lot of great music. Where I grew up, one simply didn’t hear soul, funk and rhythm & blues; in the late 70s and early 80s I didn’t know a single white person who listened to those kinds of things. (Clearly there were many such people; just not in suburban Atlanta.)

I’m reminded of the kind of music that we played in Phoenix as I spin a new set from those master curators of the wonderful (and wonderfully obscure), The Numero Group. Their latest collection is a 3CD set by Lou Ragland called I Travel Alone. Still active today (he’s a member of current iteration of The Ink Spots) Ragland was, even in the 1970s, a compelling lead guitarist and soulful vocalist. (He had briefly been a member of Billy Ward and the Dominoes.) During the tail end of the 60s the journeyman guitarist/vocalist cut singles under his own name and as Volcanic Eruption, and then formed the Cleveland-based funk trio Hot Chocolate. Not the British group that had a hit with “You Sexy Thing,” this Hot Chocolate was much funkier.

Across three CDs, I Travel Alone collects those early singles, Hot Chocolate’s impossibly rare 1971 LP, an entire album’s worth of Ragland solo, and a live-in-the-studio radio broadcast with an augmented Hot Chocolate. The set essentially covers Ragland’s dues-paying, toiling-in-unjustified-obscurity days. Yet for listeners not well versed in 70s funk, a lot of the music on the Numero collection will sound like hits. It wasn’t, despite the high quality of playing, singing, arranging and production (often by Ragland himself). The highlights are too numerous to mention, but a few tracks stand out among the thirty-plus songs. Hot Chocolate’s slow jam “We Had True Love” combines the best characteristics of Billy Paul, George Benson and Motown. The instrumental “So Dam Funky” may lead one to strongly suspect that fellow Clevelanders The James Gang heard or saw Hot Chocolate onstage. (Or vice versa; the release dates of that song and “Funk #49” were pretty close together.)

The sound quality on the Live From Agency disc might offend purists; it’s not 21st century state of the art, for certain. My advice: accept it for what it is, cast your mind back to the 70s, and imagine you’re tuning in to a relatively low-powered FM radio station to hear this ace live set. With two violas and a flautist rounding out their sound, Hot Chocolate funks their way through selections from their album plus some inspired cover tunes that telegraph their influences. Ragland’s prowess on vocals and guitar is highlighted throughout the set.

Lovers of 70s funk need this set, and everyone else should check it out as well; what I Travel Alone lacks in polish, it more than makes up for in The Real Thang. The Numero Group seem to be charmed; with their peerless taste and unparallelled crate-digging skills, they (so far) can do no wrong. Essential.