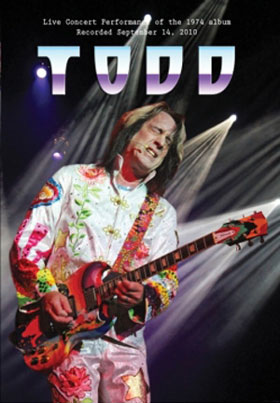 Todd Rundgren is a visionary artist. And like all true visionaries – those who follow their muse where it leads them – his output has been, in the minds of many, erratic. That’s clearly part of his appeal; it certainly is for me. But following him isn’t always easy. After the success of 1972’s Something/Anything, he made a deliberately difficult album (A Wizard/A True Star) that was truer to his own feelings, goals and intentions. While AWATS is now rightly recognized as a major work, at the time, it alienated a lot of his fans, especially the people who wanted another “Hello, It’s Me” or “We Gotta Get you a Woman.”

Todd has continued on his own path. His 2nd Wind (1991) album might have turned off those not especially into Broadway-style stage production music. And while 1993’s No World Order ranks among my favorite of his albums, not everyone wanted to hear Todd Rundgren rapping. His output has been peppered with commercial and critical successes, but he’s always remained true to himself.

Rundgren’s most recent pair of studio albums, then, came as something of a surprise even to those who gobble up every musical morsel that the man creates. Todd Rundgren’s Johnson (2011) was a collection of songs from blues legend Robert Johnson, covered in a power trio style; there was little of Rundgren’s personality in the songs as performed, and – for the first time ever – I couldn’t listen all the way through. I got bored, and that never happens for me with a Todd record.

His next album project – released the same year – was (Re)Production, and if anything it was worse. And it was worse in a particularly perverse fashion: Todd is a highly revered producer, having lent this talents to the work of a long list of other artists. What he brings to the work of others often elevates it; sometimes a Rundgren production makes something great out of something that would otherwise be little more than ordinary. So an album in which he covers the songs that he’s produced should be interesting, right? No: on (Re)Production he somehow manages to strip out whatever made the original good, creating something that is pedestrian at best, awful at worst.

The thing is, Todd can never be counted out. And as a long-time fan, I am prepared for the eventuality that – some years from now – I may revise my opinion of those two albums. That’s sometimes how it is with Todd’s music. But in general, I prefer, well, everything else he’s done.

Rundgren is keenly aware of his legacy and of his body of work. In the last few years he’s mounted tours that look into his musical rear view mirror, and he (like his fans) likes what he sees. After a successful tour in which he re-created A Wizard/A True Star in its entirety onstage, Todd mounted a tour in 2010 to perform his 1974 double LP Todd.

The idea of playing one’s albums live has caught on these last several years, and the list of artists who’ve done so successfully is long: Brian Wilson, Love, The Zombies, the Psychedelic Furs, Cracker, on and on. So on some level, reviving Todd was a safe bet. But because that album fell more into the inaccessible side of Rundgren’s catalog, it could have been a dicey proposition.

It’s not. Performed before a hometown crowd of hardcore fans, the September 14 2010 performance of Todd – newly released on DVD – is a tour de force. Staging, costuming, performance, choreography, arrangement, vocals and musicianship are not only all top notch, they’re all fully integrated into a complete experience.

The album is taken in sequence, with little of Rundgren’s trademark banter between songs. The stage setup is free of visible amplifiers, mic stands and cables, and all of the instruments (including Prairie Prince‘s drum risers) are on wheels, so they can be moved around, on and off of the stage as each song demands. A band made up of ace players representing various eras of Todd’s career provides stellar support. Kasim Sulton, former Utopia bandmate and veteran of many Rundgren solo tours, handles bass, vocals and occasional keyboards. Bobby Strickland, a saxophonist whose musical relationship with Todd also stretches back to the 70s, also sings and plays (more) keyboards, and provides wind-controlled MIDI synth support on several tracks. Todd lookalike Jesse Gress handles many of the stunt-guitar parts, plus vocals and (still more) keyboards. And Greg Hawkes (of the Cars and – briefly with Todd – the New Cars – adds (you guessed it) still more keyboards.

Rundgren himself sings, plays guitar and yet still more keyboards. Yes, it takes a lot of keyboards to recreate Todd onstage. Yet it retains a surprisingly organic feel, and there aren’t a lot of synthesizer-solo type bits on the album (or its live reading). The multitracked textures Rundgren layered in the studio require many different keyboard sounds, and one or two keyboardists — even ace ones – simply couldn’t have provided a proper version of the songs. As it is, the interplay between the players is exciting and fresh, while sounding very much like the original record.

There’s plenty of guitar wailing, too, even on this keys-dominated show. The Hendrix pastiche “No. 1 Lowest Common Denominator” and “Heavy Metal Kids” are guitar showcases. And the pop balladry of “The Last Ride” and the rarely-performed “Izzat Love” are reminders of just how varied Todd is as an album; in its own way, it’s a less-commercial answer to Something/Anything.

An odd omission is “In and Out the Chakras We Go (Formerly: Shaft Goes to Outer Space).” One can only guess that its absence has more to do with flow and pacing than an inability to deliver a credible live version of the song. A noodly number, it’s arguably among the least musical of the tracks on Todd, but it’s not wholly lacking in charm. Yet to be fair, it’s not terribly missed.

When the band returns for its “encore” (what: did you think they wouldn’t come back to play it?) of ”Sons of 1984,” they’ve changed into Indian-influenced outfits reminiscent of the Beatles‘ Sgt. Pepper uniforms, and are joined by a choral director and youthful singers from the Barbara Ingram School for the Arts. A transcendent and moving reading of the song follows, and when the curtain closes on the band (still softly singing), the audience continues the song en masse as the credits roll.

In addition to its strengths as a collection of songs, Todd is an exemplar of – and object lesson in – the importance of song sequencing; while Rundgren may have not conceived of Todd in 1974 as a work to be performed start to finish, some thirty-eight years later, this live DVD proves that the album was tailor-made for just such a presentation.

For Todd fans, there’s an amazing bonus feature: an onstage interview with Todd, conducted by Roy Firestone. Firestone asks the tough questions, delves into lesser-known and oft-rumored corners of Todd’s career, and engages the artist in a way that few interviewers have done before. For anyone who has interest in Todd’s take on his own work, that of those with whom he’s worked, or any other number of topics, the interview is absolutely essential. Its inclusion makes a fantastic DVD even better.