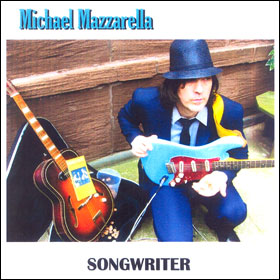 I’ve noticed an interesting mini-trend of late: high-quality but relatively obscure (commercially speaking) recording artists are putting together and releasing multiple-disc sets. These are taking the form of Odds and Sods-style compilations, bringing together alternate takes, demos, unreleased tracks, covers, collaborations, live versions and whatnot. Karl Wallinger is readying release of his own World Party retrospective Arkeology; I’m working my way through that now, and will report on it soon.

In a similar move, The Rooks‘ frontman Michael Mazzarella has put together five discs’ worth of his own music, titled Songwriter. The music covers a lot of stylistic ground, but the unifying qualities of the 99(!) tracks are Mazarella’s presence and – more importantly – the fact that he wrote every single one of the songs. All but 22 of the tracks (one on disc #4 and the entirety of the all-demos disc #5) have been previously released, but good luck trying to lay your hands on original pressings of any of Mazzarella’s three solo albums (1997’s Methods of a Mad Rook, the 2006 release Grey Over an Autumn Winter, and 2008’s Folk Songs for the Curious Few). The three original Rooks releases are a bit easier to come by, but still aren’t the sort of discs one might stumble across in the local Best Buy.

The Rooks material scattered liberally across Songwriter leans in a predictably pleasing powerpop direction; Mazzarella’s songs serve up plenty of the requisite memorable hooks and Who-derived power. The Rooks’ sound is similar to that of The Grip Weeds, Smithereens and other revered classic-minded rock groups of the NYC/New Jersey region. Mazzarella’s solo work, however, seems focused more on exploring other sorts of music; as often as not, that means less-rocking material. Some of the solo tracks – “In An Ocean,” for example, have a John Lennon‘s Dakota Demos feel to them; others, like “Home,” are more idiosyncratic, suggesting what The Polyphonic Spree might sound like at home (so to speak).

The sequencing of the music across these discs is neither chronological nor arranged according to artist (Rooks or solo work). The result is an occasionally jarring listening experience, veering between upbeat Rooks ravers and contemplative, sometimes spooky solo works. While the Rooks songs have the sparkle and polish of the best powerpop, many of Mazzarella’s solo cuts have a recorded-in-his-garret vibe that calls to mind post-Pink Floyd Syd Barrett more than, say, Martin Newell.

Which isn’t to suggest that the solo tracks aren’t fine; they are, and their inclusion is essential to – as this set must be aiming to do – chronicling Mazzarella’s songwriting talents. As the principal (nearly only) songwriter in The Rooks, he (one suspects) has to lean toward a particular and relatively narrow style; the solo works betray no such restrictions. Mas often as not, they’re based on piano melodies rather than power-chording electric guitar. Occasionally – but not often – the two styles sort of meet halfway, as on “Drag of the Month,” a Rooks track originally on their 1999 album A Wishing Well.

A handful of tracks are collected from sources other than Rooks or Mazzarella LPs. One track from the mid 80s included, “While You Were Having Fun,” is from Mazzarella’s early group The Broken Hearts. I haven’t done a comparison to the discographies to determine what’s here and what isn’t from earlier releases; doing so would take some time, as the Rooks/Mazzarella discography is fairly extensive. Fanatically interested parties are directed . (NOTE: The site’s no longer online.)

Kudos to Kool Kat Musik for working with Mazzarella to bring these hard-to-find tracks back to the marketplace. Anyone with an interest in powerpop – well, any such person prepared to cast a wider musical net – should check these discs out. At a mere $22 for 5 discs, it’s an amazing value, and some fine music to boot. The music on Songwriter should keep listeners busy until the release of Mazzarella’s next album Love in Laureltide Green, slated for 2012 release. Songwriter is available from Kool Kat Muzik.