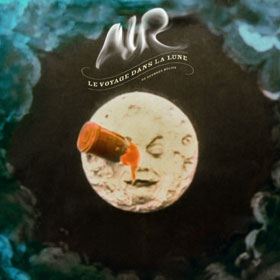 When it comes to – if you’ll forgive the obvious pun – atmospheric music, you can’t do better than Air. Never exactly a rock group, the French duo has carved out a niche of their own, producing sweeping, emotional, evocative music that sounds like no one else. Beginning with their 1998 debut Moon Safari, Air crafted a sonic approach that has influenced many bands in the electronica, chillwave, ambient and plain-old-pop genres.

Their approach can often be dubbed “cinematic,” andi nfact their breakthrough release was in fact a film soundtrack, 2000’s The Virgin Suicides. Air’s laid-back yet still somehow exciting music was perfect as a backdrop for the silver screen. Their latest Le Voyage Dans la Lune (A Trip to the Moon) occupies a similar role, but this time it’s not a modern-day theatrical release. Well, not exactly: Voyage Dans la Lune is Air’s new soundtrack to Georges Méliès‘ silent film of the same name made in 1912 1902.

On the disc, Air do not – thankfully – attempt to create steampunky arch-retro-futuristic sounds; they merely apply their musical perspective to the film’s aesthetic. Instrumental tracks alternate with pieces that feature spoken-word accompaniment, things that sound like what a stewardess might tell passengers on their way to the big grey ball in the sky.

Throughout the disc, the emphasis is less on synthesized (read: associated with a particular era) sounds and more on timeless sonics created by tympani, acoustic piano, vibraphone and voice. To be sure, there are some sampled chorus voices and the like (especially on “Lava,” where they’re folded into real voices. That track’s use of banjo is subtly reminiscent of Brian Wilson‘s employment of the instrument on his SMiLE sessions.

And some soaring, screaming electric guitar even makes the occasional appearance, giving the proceedings a slightly Pink Floyd-ish ambience. The band rocks out on “Parade,” sounding a bit like another exemplar of the cinematic/instrumental approach, 70s stalwarts The Alan Parsons Project. Here, synthesizers and “real” instruments coexist happily. More placid tracks such as “Retour Sur Terre” sound like a cross between Carole King and Brian Eno. The doomy vibe of “Seven Stars” crosses prog drumming with Low-era David Bowie, creating a fast/slow tension that evokes the feeling of silently hurtling through space. And on “Sonic Armada” Air shows how much they can do with very little: the analog lead and rubbery bass line work together to develop a track that’s almost dance-oriented. The sing-songy female lead vocal on “Who Am I Now” is reminiscent of material from yet another retro-film project, Roman Coppola‘s 2001 film CQ. That soundtrack featured another French band, the very Air-influenced (and aptly-named) Mellow.

Le Voyage Dans la Lune is successful on several levels: it works as a film soundtrack; it bears up under close/active listening; and it serves equally well as sonic wallpaper. It’s an all-purpose disc.