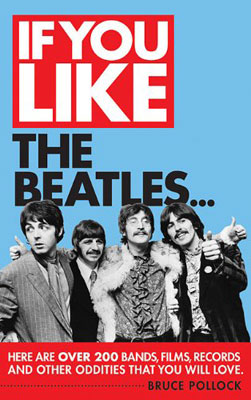 When I heard the title, I was immediately hooked: Bruce Pollock‘s If You Like the Beatles sports the irresistible tag line/come-on, “Here are over 200 bands, films, records and other oddities that you will love.” That intro positions the book – in my mind, at least – as something of a modern-day Rock Book of Lists, a consumer guide for the 21st century music enthusiast who’ accepts the argument that there’s still great music being made, but who’s not altogether sure exactly where to find it.

The book itself is actually a bit different from what I had expected. Though it’s divided into fourteen chapters, as I read through it, the book sort of divides itself neatly into three unstated sections. First, there are a number of chapters that concern themselves with the creative forces that informed and influenced the Beatles‘ music. Chapters on rockabilly and the Great American Songbook are especially good, covering ground that hasn’t been trampled to dust by previous writers. Pollock makes a number of interesting observations, and connects some heretofore unconnected dots. He even manages to give this reader – not exactly a Beatles scholar, but quite well-versed in most aspects of their story – a few “aha” moments.

At his best, Pollock’s writing style exhibits peerless timing: it would read well out loud. He knows the value of a single-sentence punchline paragraph. After a breathless and convincing description of the early Beatles’ street-level cred, he starts a new line with this rejoinder: “And Mick Jagger was an economics major.”

The middle section of the book bogs down a bit, though pointedly not for reasons having to do with the writer’s knowledge nor ability to convey it. No, the problem is – and it’s an all-but-inescapable one – that the book’s midsection covers the Beatles themselves, the what-they-did and when-they-did-it and so forth. This story has been told so many times, and in so many ways, that it’s quite difficult to bring a fresh and new perspective to bear. For a Beatles novice, If You Like the Beatles does an admirable job of summing up the Beatles’ mid-period and dissolution, but for the reader who knows the story, those chapters may seem less compelling.

The third section of the book picks up where the Beatles left off, and aims to fulfill on the promise that the cover laid out: to show how the group’s approach (culturally, stylistically, musically, etc. etc.) influenced countless artists. The challenge here is that there’s so much to say. What it means is that occasionally, Pollock’s writing is reduced to lists upon lists upon lists, all in paragraph form. He touches on the most obvious suspects (Badfinger, the Raspberries, Todd Rundgren, ELO, Oasis, Crowded House) but also discusses the legacy that (to his thinking) the Beatles gave to groups such as The Long Ryders, REM and Throwing Muses. At times the reader might lose the thread, being left to wonder why exactly Madonna gets a paragraph, or why on earth The Pussycat Dolls are mentioned. But overall, Pollock manages skillfully to weave those artists (sic) into his narrative.

There’s the occasional dubious assertion in the pages of If You Like the Beatles. The most notable one is Pollock’s argument that George Harrison was some sort of father of the modern synthesizer. This reader views Harrison’s music and legacy as significant enough that one need not push the envelope. I mean, I enjoy my Zapple Records copy of George’s 1969 Electronic Sounds as much as does anybody, but I’d hesitate in calling it a “landmark” release. Still, Pollock’s good-natured tone and his clear, vast and deep knowledge makes his occasional overreach completely forgivable.

The consumer guide portion of the book finally shows up 179 pages in, under the heading “Suggested Listening.” It might have been more helpful had Pollock provided the reader some sort of direction as to how one might actually lay hands or ears on the songs; a number of the titles mentioned exist only as unauthorized/bootleg recordings, but the casual reader wouldn’t know this. And – again this is no fault of the author – a rundown of an intriguing 4CD set called The Beatles Day by Day: The Originals – will leave the reader frustrated. This set attempts to track the deep treasure trove of covers that the Beatles ran through during their January 1969 sessions for the ill-fated Get Back album. Day by Day collects the original (or, influencing) version of each song. Beatleologists would definitely want to get their hands on this 2009 set. Alas, the frustration: it’s out of print; good luck finding a copy.

Still, as a compendium of thought-provoking rundowns of music that a Beatles fan would enjoy, it’s fair to say that if you like the Beatles, you’ll like If You Like the Beatles.