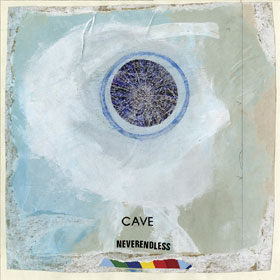 A full-length followup to 2010’s Pure Moods EP, Neverendless continues and builds upon CAVE‘s sonic approach. That approach involves a driving, heady beat (almost – but not quite – a “groove”) and a hypnotic arrangement style. On tracks like “WUJ” the band takes their time settling into the melody, establishing a pulsing, throbbing beat and then letting it unwind slowly. It’s a full three-plus minutes before the instrumental track dives into a more highly-charged approach, and when it does, it takes the form of a sort-of extended bridge. For a song that features so little in the way of chord changes, it’s surprisingly exciting. It’s not exactly drone-rock: “WUJ” is far to exciting for that label. There’s a tension level – heightened by subtle use of synthesizers, mixed low under the chugging guitar lines – that suggest that the song might “go somewhere else” (as it were) at any moment. It doesn’t, but that’s somehow okay. It’s seven-plus minutes of nearly hookless music that nonetheless manages to hook the listener.

“This is the Beat” is double the length of the opening track. This being CAVE, we know that the track will build from nothingness into something-ness, and do so in a methodical, deliberate, slow fashion. Bass and spare drumming form a bed that’s adorned by one synthesizer line, then – eventually – another. Were it not for the intimate, dry production aesthetic, this tune might find easy favor with the trance crowd. The track continues to build, adding jagged guitar sonics, and upping the rhythm section’s ante. The drums thrash, but in a precise manner. Seven minutes in, we hear something in the distance that sounds like – gasp! — vocals. But that whatever-it-is- quickly fades away, leaving behind the one-chord squall that somehow manages to be more accessible that it has a right to be. A clanging percussion element adds an almost avant-garde elements, not unlike a more rock-oriented version of Glenn Branca‘s orchestral work. Eventually, the guitars recede, leaving behind the rhythm section plus what sounds like an arpeggiated synth drone plus a bit of 60s combo organ.

“Adam Roberts” is – by CAVE standards – a short track. At just a shade over four minutes, this number has to settle into its arrangement quickly. And this it does: here the drums – though quite real-sounding, I must point out – establish an almost mechanical shuffle. The previously subtle use of combo organ is now replaced by an up-front mix, where it’s joined by multiple other keyboard parts. Guitars take a back seat here; imagine a slightly ore rock-leaning Air. The track feels shorter than its run time, even.

“On the Rise” takes a left turn: it’s based on – wait for it – a riff. An intentionally hard-to-follow one, yes, but a riff nonetheless, in what feels (to this non-drummer) like 6/4 time. And then – after nearly three minutes – they sing! Well, perhaps “chant” would be a better descriptor for the band’s delivery of the title phrase. The three-word line quickly beomes a musical instrument in and of itself, serving more as a textural element than any sort of lyrical message. Sheets of wind-tunnel guitar complement the vocals, and then things fade back out to a simpler arrangement. That snaky guitar lick returns, off kilter as ever. The track is consistent with the group’s approach and unexpected all at once.

The forty-minute Neverendless wraps up with a ten-minute number called “OJ.” Overdriven, distorted electric piano lines stomp on top of a trademark CAVE rhythm section; here the rhythm keyboard (so to speak) takes on a texture a bit like early B-52s, but without any of that band’s silliness. Here the band sounds more like some, if you’ll pardon the phrase, cavestompers. Echoes of The Doors, Count Five, Electric Prunes and other names familiar to (and treasured by) Nuggets aficionados are all over this track. A bit of synthesizer helps keeps one foot in modern sonic territory, and a twisty fuzz-bass line anchors what – in the end – is the strongest track on Neverendless. The guitar-feedback ending evokes the feeling of a spaceship, leaving until CAVE returns with their next record.

Trace-y, drone-y rock doesn’t get much better than this. If that sort of thing moves you, Neverendless is an exemplar of the style.