To American music fans, the name Mitch Ryder evokes a particular set of thoughts. Most of these center around his string of hit singles, most of which appear on the 1967 LP All Mitch Ryder Hits: “Devil With a Blue Dress/Good Golly Miss Molly,” “Little Latin Lupe Lu,” “Sock it to Me Baby” and others. Recorded with or without his original band The Detroit Wheels, Ryder was – for a time – at the top of the US singles charts.

To those same American fans, Ryder all but disappeared from the music scene not long thereafter; his last charting single – and these were still the days of the single – was in 1967. He rarely stopped working, though, and Ryder (born William S. Levise, Jr.) briefly popped back onto the lower rungs of the charts with a single, “When You Were Mine,” off of his John Mellencamp-produced “comeback” album Never Kick a Sleeping Dog. Since then, as far as the American market – it’s been all quiet on the Ryder front.

Not true in Europe, however: in Germany and other countries on the continent, Ryder is a star. “I’m an oldies act here [in the USA], for all intents and purposes,” Ryder says. “But over there [in Europe], I’m an artist.” With the stateside release of The Promise, Mitch Ryder hopes to swing things more into balance. His new book is raising his profile as well. 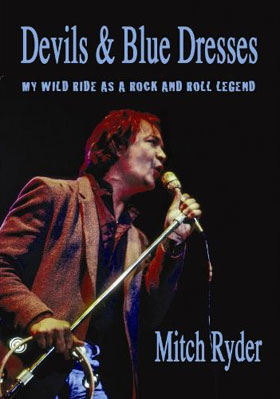 A complex man with a complex story, Ryder recently penned an autobiography titled Devils and Blue Dresses. The book tells the story of Ryder’s early years, rise to fame, fall from the graces of the music industry, and so on. It’s a fairly lurid first-person reading of his life, rife with stories about the abuses (warning: all kinds) he suffered at the hands of industry types. In a very real sense Devils and Blue Dresses is a score-settling tome, and not always a comfortable read. The early chapters of the book chronicle the Detroit Wheels years and the (as portrayed in the book) malevolent behavior of label head Bob Crewe. To anyone familiar with this sort of story, it may come as something of a surprise to learn that Crewe is still alive; the sort of tales recounted about him in Devils and Blue Dresses are more often than not – usually on advice of counsel – reserved for the departed. Ryder portrays Crewe and his associates as every bit the villainous equals of Morris Levy in Tommy James‘ book Me, the Mob and the Music. But Ryder paints Crewe’s ignominy as a decidedly wickeder sort.

Still, there’s a nagging sense that Ryder left some of his most shocking tales out of the book. “I didn’t hold anything back,” chuckles Ryder. “The lawyers held it back! That thing was vetted by two different attorneys, a professor of law in California…and I believe they took out insurance on the damn thing as well!”

Throughout the book, Ryder’s views about income inequality in the United States, plus its causes and effects, are made plain. He’s been on both sides of that equation, though much less on the up-side than his famous name might lead one to think. “I’m not an advocate of class warfare,” he stresses. “But I do think it’s not equal in America any more, and it’s not fair. I do believe that there’s a concerted effort to destroy the middle class, so that eventually there’ll only be two classes of people left: the very rich — who will be very few in number — and the rest of us, who’ll be poor.” In the book’s introduction, Ryder sets out to, as he explains, make sure “everybody understood what class of people I came from…and what it cost me to reach the middle class. Which I did,” he adds, “At one point.”

The later chapters in Devils and Blue Dresses concern themselves with Ryder’s lean years, and the fallout from his sixties misadventures. Some left-field asides – under the heading “A Window Into My Soul” – make for occasionally distressing reading, and the book’s ending may lead most readers to stare at the page and yell, “What?” But in whole, Devils and Blue Dresses is a gripping read, one that should justifiably get the Detroit native some stateside notice.

In the post-Detroit Wheels period (which covers 1968 to present) Ryder has released twenty-five albums, including one with a rough-n-ready MC5-like outfit called Detroit (a self-titled LP released in 1971). With the exception of the ’83 album, none of these has generated any notice in the USA, though many have sold respectably in Europe. In 2009 Ryder released his most recent collection, Detroit Ain’t Dead Yet: The Promise. In 2012 that Don Was-produced album – now with new cover art and a title shortened to The Promise – is being released in America. Ryder describes the songs on The Promise as “hang[ing] right around that R&B/rock flagpole,” providing a sonic connection to his sixties output.

Ryder says that he own the rights to most of his recorded output, precious little of which has been released in North America. But he felt that with The Promise, the time might be right to bring his music back home, as it were. “Don Was is a good producer, and the album is contemporary,” he says. “I’m not sold yet that the American public is ready to hear all of the great music that I’ve been creating overseas, but as the interest grows, we’re being pushed toward putting [the back catalog] out here.” Reflecting on the size of that catalog, he laughs, “Maybe one per week or something.”

Other than the smooth sounds of Berry Gordy‘s Motown hit factory, Detroit music — and Michigan music in general – has been really hard-edged. Whether it’s the Stooges, MC5, Dennis Coffey or any of the Funk Brothers material, it has a real grit to it. Even smoother artists such as The Dramatics put forth music with a strong streetwise element. Ryder captures that aesthetic well on the new album’s title track. “I think it’s a good representation of my schooling, my history, what I’ve learned and picked up,” he says. 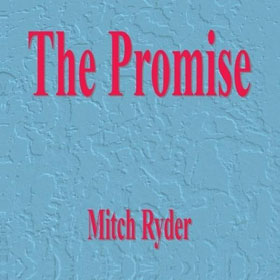 Ryder is proud of his Detroit roots. Hit especially hard by the Great Recession, the city has gotten a lot of bad press in recent years, and in the national conversation, so to speak, Detroit has sometimes been treated almost as a mean-spirited joke. Yet in recent years a proudly defiant attitude has been witnessed rising out of the city. Something as mundane as the new Chrysler ad sort of points out the real American character of Detroit. On The Promise, Ryder aims to convey that same sense of gritty, hard-won pride. “I think it’s overdue,” Ryder observes. “We have to stand up for ourselves; we’re the butt of everybody’s joke.” He points to part of the problem in getting Detroit’s good stories told: “We’re not a media city like New York or Los Angeles.”

“We’re just trying to stay true to our roots here,” Ryder says. “We’re just basically hard, hard-working, middle class people. The wealthy class here is old and well-seated, and unfortunately a lot of their fortunes are tied up in the auto industry.” Attempting to sum it up, Ryder says, “If you live here, it all makes sense.” He chuckles, “We have to work extra hard when we’re trying to make a statement to the nation, because they have such a negative view of the city.” That view isn’t limited to Americans. “I spend a lot of time in Europe, and they just absolutely picture Detroit as a wasteland. It’s worth defending,” he says. “I’ve seen what’s happened to middle-class families, what with the busting of the unions, everything that we’ve fought so bravely for here in Detroit.”

There’s a long list of American artists – in many genres – who have found more success in Europe than at home. Reflecting on what it is about European audiences that allows them to appreciate American performers who can’t get arrested (so to speak) at home, Ryder says, “They have a different view of culture than we do. They put a value on history that we don’t. We’re pretty much psychologically prepared to be a disposable culture: The biggest question out of our mouths is, ‘What’s next?’”

Commenting on his dogged sense of determination in the face of commercial indifference at home, Ryder says, “I didn’t want to grow old, sitting around and cashing in on a name that was only good for a few years. I just wanted to keep going. Whether or not it [always] reached the public wasn’t the intent. The point was to keep a historical record of my progress as an artist.” That progress currently includes work on a work for the stage. “I’ve got a musical that I’m halfway through,” Ryder reveals. “It’s not a rock opera, a rock musical, or based around my hit records or my life,” he stresses. “It’s more in the grand old tradition of Les Miserables.” Promotional work for Devils and Blue Dresses plus a European tour mean that work isn’t progressing as quickly as he’d like, but Ryder says, “When I return from the tour, then I’ll jump back on the musical and try to get that done in 2012.”