Home  »  interview   »   Akron/Family: Getting to Know the Unknowable, Part One

Akron/Family: Getting to Know the Unknowable, Part One

Allmusic.com describes Akron/Family as “exasperatingly unknowable.” All I can say is that the bio writer must not have spent any time in conversation with the band. Sure, their music draws from a lot of disparate sources, and they don’t feel the need to follow anything approaching a formula. But a conversation with Miles Seaton (who plays bass onstage, multiple instruments in the studio) showed that he and his band have given a lot of thought to their music, and how it is received by their listeners. Their latest album bears the unwieldy title S/T II: The Cosmic Birth and Journey of Shinju TNT, but in-person they’re a group of accessible, funny yet introspective guys. Immediately before their recent show at Asheville NC’s Grey Eagle, Seaton and I sat down for a talk.

Bill Kopp: A number of your songs move through different sections. I’ll be pretentious and call them “movements…”

Miles Seaton: They are kind of pretentious… [laughs]

BK: …and sometimes the sections seems sonically unrelated to one another, at least on first listen. I’m curious: when you’re writing the songs, do you compose them with the idea of a piece that’s going to go through these different sections, or do you compose sections, and then say, “Hmm…now, how can we put this together with that?”

MS: It’s more the former. I definitely feel like the songs are composed. Sometimes there are songs that are put together that are two ideas, and they’re meant to be two separate things. “Gravelly Mountains of the Moon” was a song on our last record [2009’s Set ‘Em Wild, Set ‘Em Free] that was meant to be two separate songs, but ones that were definitely meant to be played together. The idea was that the lyrics are pretty abstract, and are meant to have some reference to dreams. I feel like in a lot of ways, we may have compositional references to, like, dream states.

There was a book I was reading where the author was exploring boredom. He writes a lot of tedious lists of shit that are just…y’know, after awhile you start to feel fucking bored just reading it. But he’s working on the effect: it’s a meta-statement to a certain degree.

I feel like there’s a level when we’re composing – sometimes it’s a little more intentional, but, y’know, sometimes there are songs where we start out with a groove that we love. We just keep on playing it and playing it and playing it. And then we think, “We should make this into a song.” And then we’ll put this piece with that piece. But more typically, we compose them as songs. It’s just that we don’t have [chuckles] normal tastes.

BK: So does new material grow out of live performances, or vice versa?

MS: Certainly both. They feed into each other. It’s more that the energy of live performances starts ot dictate how the material comes about. A lot of times we’ll end up playing new material for a tour or two, letting it develop while we’re on the road. Because we don’t rehearse; we live in different places.

Performance is a whole set of different parameters. You can feel the way people react to it. You can be involved in it in a different way; it’s really hyper-intensive. I remember someone was telling me a quote – maybe it was from Bill Frisell – “One performance is equal to eight rehearsals.” Or something like that. 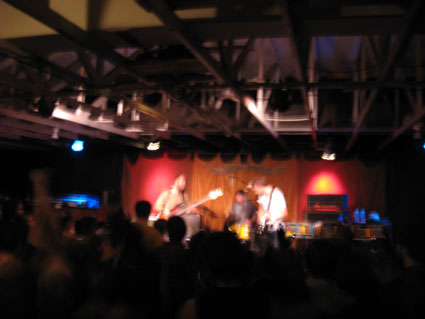 BK: Right Onstage, you’re in that zone, so why not – instead of just wheeling out the songs from the record – why not make it part of the creative process.

MS: Yes. And also, the record starts to inform how we want to compose a show, to a certain extent. You do create a relationship with people through your songs; its almost an act of generosity. On this tour, we really got into fuzzed-out sounds, Japanese noise, and all these different kinds of things that really inspired us when we made the record. Once we recorded it, we went and bought the same kinds of amps we used in the studio. Our tastes for this sort of music – on a timbre level, on a sonic level – started to revolve around that sound. We bought cabinets that match each other sonically, stuff like that. So everything really has this specificity to it.

It’s kind of a function of us getting older, too, and really getting into…subtlety. Y’know, when I was a kid, it was like, “Whatever the fuck!”

MS: On an energetic level, they both feed into each other. After a while, the whole thing becomes part of the creative process.

BK: So the pieces performed live are an organic thing; I’m guessing that they’re structured, but that there’s room to move. Sections where you can do your own thing rather than playing the same way every night. There’s no James Brown sort of thing where one of you gets the hand signal for playing the wrong note.

MS: Right. [laughs] Nobody gets fined!

BK: While to my ears, Akron/Family doesn’t sound like anybody else, I do hear sonic elements that seem like they were informed by some of the same sensibilities that infomred the early Flaming Lips albums. The period in which they were less about structure.

Labels are always a pain in the ass. But when I read up about you, some of the labels that were used were acid-folk, freak-folk. But when I think of those terms – being an old-school guy – the first thing I think of is Pearls Before Swine, Tom Rapp. Does that sort of thing have any connection at all with where you’re coming from? 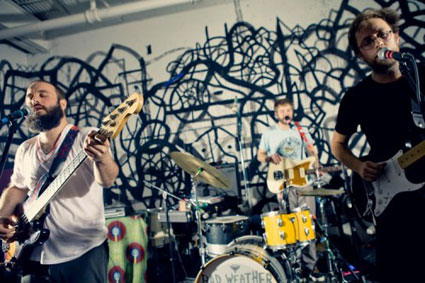 MS: I feel like it does in an abstract way. It’s sort of seeped into the water. And also, when all of us were teenagers, we all experimented with psychedelics. So we had some of the same experiences that those dudes were having. So that’s referenced for us, because it changes the whole way you see things. It changes everything. The first time I took that stuff, I had my dad’s record collection, and I was listening to a lot of Jimi Hendrix and that stuff.

But as far as the more obscure stuff, I listen to a lot of folk music from all over the world. Moroccan music, West African music. So there’s a lot of folk music that’s really inspiring to us. And we get really excited about stuff like The Boredoms. And speaking of the Flaming Lips, they’ve always been one of my favorite bands.

MS: We played a festival with the Flaming Lips. And The Boredoms played as well; I saw them play, and completely lost my mind. I had seen them before, and it was amazing. But this show was something beyond. It was so amazing, so brilliant, that five hours later I was walking around in a daze. And then I saw the Flaming Lips – normally, one of my favorite shows on Earth – and it was almost like a joke. The Boredoms were so profound, so clear, so pure. No boundaries.

But the influence always comes from everywhere. Maybe we’ll get really obsessed with a Kanye West record, or R. Kelly. There’s always something.

BK: But you filter that through your own sensibility, so it doesn’t come out like a tribute record.

MS: that’s what I mean. It’s America. So I realize – especially when we’re in Europe – that we’re a profoundly American band. So when I think of how much I love The Grateful Dead or whoever, it’s not even necessarily about having the same aesthetic. It’s more about the open-source nature of it. It’s an encyclopedic thing. One criticism of us is that we’re switching from genre to genre. But for us it’s not a genre thing at all: there’s a voracious quality to our ears. It’s as much about literature or contemporary art; these are the things that are always inspiring us. The fact that we live in America means that everything is coming in.