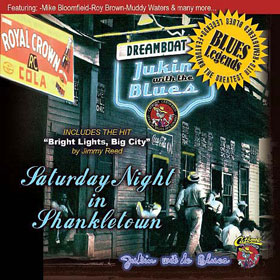 Catbone is a blues-centric imprint of MVD Audio, and is headed by one Ken Hatley, a blues aficionado and musician himself. A series of releases under the confusingly- and possibly-misleading banner of “Catbone Unreleased,” these five discs nonetheless offer up some fine and interesting music.

Various Artists – Saturday Night in Shankletown
This disc kicks off with Billy Boy Arnold‘s “I Wish You Would,” a song most familiar to rock fans through its cover by the Yardbirds. The Chicago blues harpist (repeatedly mis-credited on this disc as Billy Boyd Arnold) has cut the track several times during his illustrious career, and – sadly typical of this series – the liner notes make no mention of which version this is. His stomping “El Dorado” will be more familiar as “I Ain’t Got You,” also covered by the Yardbirds. The disc collects classic blues sides – both old and (more often) contemporary – by Muddy Waters and James Cotton. But it also mixes in some left-field selections: George Cummings (of Dr. Hook); a Commodores cover of the soul hit “I Know I’m Losing You” and some late 90s collaborations between Nanette Workman (a sensation in French-speaking Canada, I’m told) and Peter Frampton. The disc wraps with a slick number from label head Hatley himself; it answers the question, “What would Paul Shaffer‘s band sound like playing the blues?” In total, Saturday Night in Shankletown is a mishmash that has no discernible unifying theme; it’s a bit like listening to a non-commercial, free-form blues station (does such a thing exist?) at three in the morning.

Various Artists – Bar-B-Cue’n Blues
A theme – such as it is – is beginning to develop on the second volume. More Billy Boy Arnold, James Cotton and Muddy Waters. The lyrics to Arnold’s “Catfish” will ring familiar to anyone who’s ever listened to the Beatles‘ cover of “Matchbox.” (A quick bit of checking suggests most if not all Arnold tracks on this series are taken from an album he cut in the early 70s called Catfish, featuring the Groundhogs as his backing band. Who knows?*) This set’s left-field cut is “I Don’t Know What You’ve Got,” a soulful Little Richard hit from the mid-sixties. It’s a fine tune, well worth having. But its placement here makes neither sonic nor thematic sense. At least the series is consistent in its…inconsistency.

* Well, I do, now.  I have it on reliable authority that the tracks are instead from a 1972 Arnold LP called Checkin’ it Out.  Allmusic.com rates it at the bottom of Arnold’s works. As ever, your mileage may vary. — bk

Various Artists – Belly Full of Blues
Sixteen more seemingly random selections make up the third installment in the “Jukin wit de Blues” series from Catbone Unreleased. (As best as I can determine, not a single track on any of these discs is previously unreleased, giving rise to a hearty “WTF?” concerning the label ‘s name.) This time around, it’s more contemporary recordings from – you guessed it – James Cotton, Muddy Waters, and the much-loved Workman/Frampton collaboration. (Forgive my snark.) But it wouldn’t be a Catbone Unreleased, er, release without some unexpected numbers being tossed in at random. So here we have a number called “Polka Dots and Moonbeams” from west-coat jazz artist Jack Millman. Maddeningly, the CD back cover’s track listing bears no relation to the sequence of tracks on the disc itself. A pair of dire modern tracks from The Original Flares (who?) feature cliche’d playing, bad organ samples and click-track drumming. For good measure, a track from Tina Turner‘s 1972 country-and-western LP The Country of Tina Turner is also included. No, really, it is.

Various Artists – Mean Street
But wait: there’s more. Howlin’ Wolf and James Cotton, of course, and more Muddy Waters and Frampton/Workman. Some actually-probably-old recordings from Elmore James (“Dust My Broom,” for example) are pretty fine. Little Richard’s reading of “Hound Dog” will have to pass for this volume’s odd selection, unless you consider an Etta James cut (listed here as “It Brings a Tear,”) which is actually a live reading of “Drown in My Own Tears.”

Various Artists – Jukin‘
The fifth and (to date) final in the grab-bag collection of blues and r&b sides from Catbone Unreleased, Jukin‘ serves up seventeen more tracks from names you know. If by some fluke you didn’t know them before, you know them after four volumes of “Jukin wit de Blues.” Howlin Wolf, Elmore James, Little Richard, James Cotton. And our friends Nanette Workman and Peter Frampton. This volume keeps the odd selections to a minimum, making it the best in the series. The addition of some Mike Bloomfield is a plus.

Don’t get me wrong: as noted above, these discs include music from some important artists, and some of it is very good. But to find those, one must wade through re-recordings of songs (Little Richard), bizarre inclusion of unknown acts like The Original Flares, and just-plain-odd selections (Frampton/Workman) whose presence seems to have more to do with availability than quality or musical value. While some of these tracks are good, and a few are great, it’s tough to recommend any of these discs without including all of the warnings noted above.