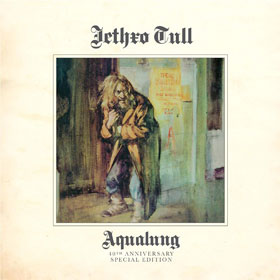 A few weeks ago, Jethro Tull‘s highly regarded 1971 album Aqualung was released in a special 40th Anniversary package. But let’s be honest for a moment: this isn’t 1989 (by which time the CD format had completely taken over from vinyl) or 1993 (the year I finally broke down and bought a CD player). So if you like Aqualung, you probably already have it on CD. And if you don’t care for it, well, no amount of repackaging will increase its appeal.

So why should the 2012 music consumer – one who enjoys Ian Anderson‘s vocals, songwriting and flute, and Martin Barre‘s guitar work – consider spending his or her hard-earned cash on a new Aqualung package? Here are a few answers. First of all, the new package (available in several formats, but I’m concerning myself here with the 2CD set) has been remixed from the original master tapes by Steven Wilson. The modern-day renaissance man has his finger in all sorts of musical pies, having done remix/remaster work on the King Crimson catalog (still rolling out) and Caravan‘s wonderful In the Land of Grey and Pink. So rest assured that the sound on the “new” Aqualung is as good as it can possibly be, and that it will reveal new depths of subtlety that the original hid away.

Secondly, there’s a nice in-depth/lengthy interview/essay courtesy of Dom Lawson. The piece goes into detail (and historical context) about Aqualung the album, the cover art, and the is-it-or-isn’t-it-a-concept-LP argument. (Spoiler: Anderson insists it’s not. Me, I’m still not so sure.)

But Reason #3 is the kicker, the most convincing argument in favor of a modern-day purchase of Aqualung: 40th Anniversary Special Edition. The package includes a second CD jammed full of Jethro Tull music from the period. And instead of taking the easiest path to fill a bonus CD (slapping on a live concert from the era, perhaps one of those King Biscuit affairs), the second disc compiles new/alternate mixes, b-sides and alternate takes. The result is an album-length collection that, frankly, holds together on its own nearly as well as the original Aqualung album. And that’s saying something.

A full third of the bonus disc is a (mostly-but-not-completely) remastered version of a 4-song EP from 1971. The tracks (“Life is a Long Song,” “Up the Pool,” “Dr. Bogenbroom,” “From Later” and “Nursie”) hang together well, sound very much of a piece (sonically if not thematically) with the Aqualung numbers on the first disc. The sounds-like-a-hit “Lick Your Fingers Clean” is here too, though it’s been part of various Aqualung bonus CD reissue tracks since 1996.

An early version of “My God” runs nearly ten minutes, and it’s every bit as melodramatic as the official version. The main album’s brief “Wond’ring Aloud” is now joined by one of the new set’s few never-ever-released-before tracks, the seven-minute “Wond’ring Aloud, Again.” A total of four tracks on the second disc have never appeared officially until now.

If your opinion lines up with that of the majority of rock reviewers – that Aqualung was the best and most fully-realized of all Jethro Tull albums – then a purchase of the 40th Anniversary set is necessary, seeing as disc two runs only slightly behind the original album in terms of quality. And for the truly hardcore Tull fan, there is another configuration of the set available: including two vinyl LPs plus CDs collecting all of the material on these two CDs, it features an additional 121 (yes! One hundred and twenty-one) tracks on DVD and Blu-Ray, many of them 5.1 Surround and Quad mixes, plus a hardbound book.

Commenting on this expansive reissue, Ian Anderson had this to say (from the press kit): “I hope you enjoy this splendid EMI release and, if there’s someone out there you really love, then why not treat them to the Collector’s Edition in all its glory. Or, come to think of it, if there’s someone out there you really dislike, then the same might apply. Each to his own. Me– I kinda like it…”

You may also enjoy my extensive, wide-ranging and lively 2008 interview with Ian Anderson.