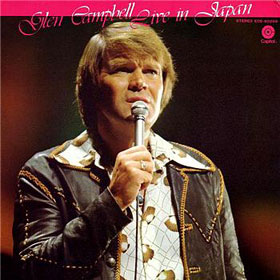 Very recently, a singer/songwriter musician friend of mine paid me a lovely complement. Having recently completed the recording of her band’s upcoming album, she had to note the genre-classification for each song on the album. Struggling to apply a succinct label to one of the songs, she asked for my opinion. Flattered, I listened the first chance I got. While her music travels between and across many styles, this particular one was, to me, clearly one specific thing, and I told her so: it was pop-country.

I fear that she might have taken offense. She shouldn’t have. I meant it in the best possible way. And I’m reminded of the genre to which I refer as I listen to a new CD of a May 29 1975 Tokyo concert titled Glen Campbell Live in Japan.

For American (and other) fans of a certain age – my age, as it happens – Glen Campbell is a well-known part of pop music history. Sure, serious pop fans know his excellent guitar and vocal skills as they were applied (often as a member of The Wrecking Crew) on Beach Boys albums. (Campbell even “depped” for Brian Wilson on a Beach Boys tour in the 60s.) But more causal pop fans still know Campbell. His music got loads of airplay on AM radio (for younger readers, I’ll point out that AM radio was not always the province of talkative angry white men, and actually played, y’know, music), and he was a mainstay of television. His program The Glen Campbell Goodtime Hour ran from January 1969 through June 1972 on CBS. Though it shifted from Wednesdays to Sundays to Tuesdays (with different time slots each time as well), the variety program brought Campbell’s winning personality into American homes.

Campbell was already quite familiar to TV audiences; he had been a frequent musical guest on The Smothers Brothers Show. And although his style was nominally country and western, his appeal was sufficiently broad – unlike that of, say, CBS’ Hee Haw, which ran during the same years – to reach mainstream audiences. One need not have been a C&W fan to enjoy his show’s mix of sketch comedy and music.

Always a strong concert draw, Campbell nonetheless released few live LPs during his commercial heyday. And Live in Japan was released only in Japan (he was big there, too). This record – now released on CD stateside for the first time – documents what must have been a typical Glen Campbell concert of the era. Not unlike his television show, it sought, quite successfully, to showcase the many sides of Campbell’s substantial talent. A top-notch orchestra provides lovely string accompaniment to the numbers that require it. Between-song banter is good-natured and playful, yet short and sweet. And the instrumental dueling on “Song for Y’all” gives deserved credit to a member of Campbell’s band.

“Coming Home (To Meet My Brother)” is a highlight of the set. Not unlike The New Seekers‘ hit “I’d Like to Teach the World to Sing,” the tune started out as a Coca-Cola jingle and ended up as a delightful pop song. With subtle shades of The Byrds‘ “Feel a Whole Lot Better,” the track distills the essence of Campbell’s 70s appeal: commercial sensibility; clear, chiming vocals; just the right touch of sentimentality; and expert playing. And – once the listener sits through a slightly overlong spoken bit – a modern reading of Gioachino Rossini‘s “William Tell Overture” rocks in a thrilling, windswept, wide-screen kind of way.

Live in Japan is, perhaps, a bit short on Campbell’s original material (or material most readily associated with him). His most well-loved songs (“By the Time I Get to Phoneix,” “Try a Little Kindness,” “Wichita Lineman,” “Honey Come Back” and “Gentle on My Mind”) are combined into a “hits medley.” Even “Galveston” – which is placed near the beginning of the set – is given a brief reading. Campbell pays tribute to a number of his peers (or, shall we say, concurrently-popular artists of slightly overall lesser merit) as he covers numbers by – or associated with — Mac Davis, Anne Murray, John Denver, Jimmy Webb, and Barbra Streisand).

So, yeah, Live in Japan does tend toward the MOR end of the pop musical spectrum. But for a flawless yet full-of-life document of the best that mainstream, wide-appeal pop could offer in the middle of the 1970s, Glen Campbell Live in Japan is a very worthwhile document. Bonus points to the folks at Real Gone Music for unearthing this previously-rare gem, and for putting together a lovely package that reproduces the original artwork and liner notes. Mike Ragogna‘s new historical essay places the recording in the proper context. The liner notes confess that the 2012 release of this 1975 concert is no coincidence: it’s timed to get noticed during Campbell’s farewell tour. Not a thing wrong with that: Live in Japan captures Campbell at the top if his game. One need only to listen to the soaring, sensitive arrangement and performance on the “Wichita Lineman” segment of the hits medley for proof.