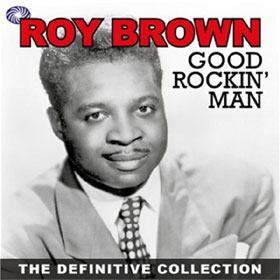 In recent decades, proper credit has finally (and belatedly) been given to some of rock and R&B’s earliest and overlooked performers. For many years the narrative went that the fathers of modern rock, soul and R&B included Ray Charles and the Sun artists (Cash, Presley, Lewis etc.) and few others. Some welcome historical revisionism has taken place, and shone a light on the lesser-known artists who contributed to these pop forms in their own important and unique ways. The Treniers, Louis Jordan, Louis Prima…the list goes on an on.

Roy Brown deserves mention in this expanded list. His original composition “Good Rocking Tonight” was written and recorded in 1947. Read that again: nineteen forty-seven. Though the instrumentation on the track is standard for the era, all of the elements of what the world would (several years later) come to know as rock’n’roll are all there in this postwar side.

Fantastic Voyage’s new 2CD set Good Rockin’ Man: The Definitive Collection collects fifty Brown sides from 1947 to 1960, and while the recording fidelity isn’t always top-notch, the feel always comes through. A blues shouter with good range and the ability to convey plenty of emotion (or swagger, as needed), Roy Brown could and did cover a wide range of styles within the relatively narrow confines of his genre. Unlike many of the era, Brown wrote a lot of his own material: of these fifty songs, only a handful are co-credits or covers. The rest are Roy Brown originals. And also unlike many of his contemporaries, Brown wasn’t content to write the same song over and over sixteen different ways. With the aid of his band, he crafted songs that varied enough to keep things interesting. You could dance, for sure, but just listening worked too.

The subject matter of Brown’s music is about what you might expect for upbeat party music: songs about rockin’ (in its original sense, thankyouverymuch), crazy crazy women, bootleggin’, trouble at midnight and letters from home are the issues of the day for Brown.

Neil Slaven‘s liner note essay provides some welcome background, but the (nicely-packaged) set is dinged ever-so-slightly for lack of infomration as to who plays on the songs. (To be fair, that sort of information isn’t easily found anywhere in 2011.) But whoever the hell they are, on songs like “Roy Brown Boogie” (hey: he earned the right to name a song after himself), they swing hard.

Anyone interested in the development of popular 20th century music forms needs to spin this set. I suspect that if I danced, I’d like Good Rockin’ Man: The Definitive Collection even more than I already do.