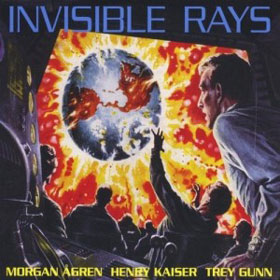 Where a CD featuring Trey Gunn is concerned, one both knows and does not know what to expect. The former King Crimson touch guitarist is renowned for making crushingly heavy music that pushes the boundaries of conventional musical forms, yet he usually manages to impart the music with emotion; that quality keeps it from turning into cold, technocratic, humorless prog.

Much the same is true of Henry Kaiser‘s work. The experimental/improvisational guitarist composes wholly freed of the constraints of the pop song form. His work isn’t generally described using the word “accessible,” but it’s rarely less than interesting.

A new album titled Invisible Rays brings together these three immense talents – Gunn, Kaiser and Ågren – and finds them doing what you would expect: shredding, but in a fashion that will hold the interest of those more melody-oriented listeners. The opening (and title) track runs in excess of 22 minutes, and it serves up a dizzying array of textures from all three players (Gunn also plays bass). Fourteen minutes into the track, the trio briefly sounds a bit like Starless and Bible Black era King Crimson. The number ends with jagged shards of metallic riffage.

Perhaps taking a small leaf from Zappa’s modus operandi, the trio assigns witty/goofy titles to some of its more outlandish instrumental numbers. Witness such titles as “Take a Bath With Lenin” and the cacophonous, noisy and minute-long “Greatest Hits.” When working in such a heavy improvisational area as these tracks, a bit of humor is welcome in most any form.

On numbers like “The Magic Ring of Invisibility,” the trio leans in a direction that suggest what Zappa’s Jazz From Hell might have sounded like if performed on “real instruments” instead of the Synclavier. Things get a bit atonal on “Where is Juan?” but some soaring guitar lines (probably from Kaiser) gives the track an almost 80s-power rock feel, albeit only for a minute or so. “Secret Handshake with Danger” kicks off up with some guitar that sounds uncannily like the opening of Cheap Trick‘s “Mandocello,” of all things; then it evolves into something that wouldn’t be completely out of place on the O Brother, Where Art Thou soundtrack. Then it heads for space-rock territory, setting the controls for the heart of Sun Ra.

“The Last Guru” applies sample-and-hold synth effects to the guitars, and the result is sort of a kindred spirit of ConstruKction of Light-era Crim with a dollop of Steve Vai string-bending. Gunn’s bass work here is devastatingly heavy. The opening of “Take a Bath with Lenin” finds Kaiser digging out his old wah-wah pedal and using it to good effect; from there the track descends into the maelstrom: its the trio at their most difficult. “Ghost Red Wires,” on the other hand, is (along with “Invisibility Clause”) among the most accessible tracks on Invisible Rays: here Kaiser channels his inner Andy Summers while Ågren provides some subtle stickwork reminiscent of Stewart Copeland. Be advised, though: the result sounds nothing like the Police.

With the exception of some overdubs of percussion and zither(!) the entire session took place in a single day in March 2011; that get-it-done aesthetic provides an immediacy to the proceedings, and all but guarantees a lack of fussy artifice.

Decidedly not among the most mainstream of releases, Invisible Rays nonetheless offers high entertainment value for those (such as this reviewer) receptive to technically brilliant displays of progressive improvisation. All others best steer clear.

You may also enjoy my 2011 interview with Trey Gunn.