Home  »  interview   »   Dirty Little Secrets of the Record Business: Why So Much Music You Hear Sucks

Dirty Little Secrets of the Record Business: Why So Much Music You Hear Sucks

This is a reprint of a feature/interview I wrote in 2007 for a now-defunct magazine. But Hank Bordowitz’s book remains relevant, and it’s a great read besides. — bk 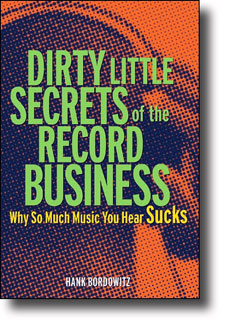 “A lot of the popular music you hear out there, especially on the radio, is just crap,” says Hank Bordowitz, author of the provocatively-titled Dirty Little Secrets of the Record Business: Why So Much Music You Hear Sucks, “but there is probably more good music available than ever before. It’s just much harder to find.” The industry serves up lowest-common-denominator pap, but quality music survives.

That’s a succinct summation of the book’s thesis, and of Bordowitz’s belief. The eminently readable book is a pleasing mix of anecdote and facts-and-figures, part investigative journalism, part love letter to good music. Industry veteran Bordowitz (he’s a former recording artist, a music industry consultant, an author with several books to his credit, and now a professor at Western Illinois University) lays out exactly what’s wrong with the record business, but he doesn’t stop there. Ultimately the book strikes a hopeful tone about the future of popular music. I spoke with him as he packed, preparing to move with his family to Macomb, Illinois.

Market segmentation — the idea of marketing your product or your art to a narrower group of potential fans — is a central part of Bordowitz’s hopeful vision of the future for musicians. The new paradigm will mean success can be attainable without having to sell in the millions. “The way I see it,” Hank says, “is that the industry is going to downsize. It’s got to. It’s never going to be what it was ten years ago; I just don’t see it.” He believes that musicians — good ones, anyway — will be able to make a living playing in their respective specific geographic areas. And with digital delivery more of a practical reality every day, the cost of creating a product and putting it into the hands and ears of consumers is arguably less expensive than ever. “What we’re witnessing now is a sort of Back to the Future effect where singles rule, and you’ve got artists making a decent living playing locally.”

A number of developments that line up with the book’s predictions began to unfold as the book went to print. Obviously the internet is a way to level the playing field for artists wanting to reach new listeners; as Bordowitz says, “as long as the web stays neutral, then everyone has an equal chance. Of course, money makes things a lot easier, but it takes a lot less money to do things on the web than it does without the web.” Creativity can, in a sense, take an artist farther than it did in the past. “YouTube, and a lot of the web 2.0 stuff…are the sort of things I saw happening when I was writing the book,” says Hank. “A lot of that stuff bodes really well for musicians trying to find their audience.” He also thinks these new tools might be an answer of sorts for those in the shaky business of music marketing: “Musicians can’t do everything. They need people to market them. That used to be — and maybe still is — what the record companies did reasonably well.”

And what of the record labels? Is there room for them in the new marketplace, or are they slow-witted dinosaurs doomed to extinction? “You’ve got an artist like (jazz composer) Maria Schneider who wins a Grammy® award for a record that was never released to the stores.” He also mentions Todd Rundgren‘s approach (a direct-to-the fans arrangement called Patronet) as “the most intelligent way.” Overall, this migration, this sea change away from the labels “is still happening. It’s happening now.”

I asked Bordowitz what he thought the record business would look like a decade from now. He concedes it’s a good — and relevant — question. “I’m actually in the process of giving that question very serious thought. I’m putting together a music business program for students who are going to be in the music business. They’re going to want to know.”

It’s Bordowitz’s considered opinion that the music business — as opposed to the record business — is in pretty good shape. “The record companies are in deep, deep shit,” he says, mentioning the industry lawsuits against file sharers (“what kind of business sues its biggest fans?” he ask rhetorically). “But the music business — in terms of publishing, in terms of live performance — has rarely been healthier. Dirty Little Secrets of the Record Business is published by Chicago Review Press and is available online and wherever else fine books are sold.